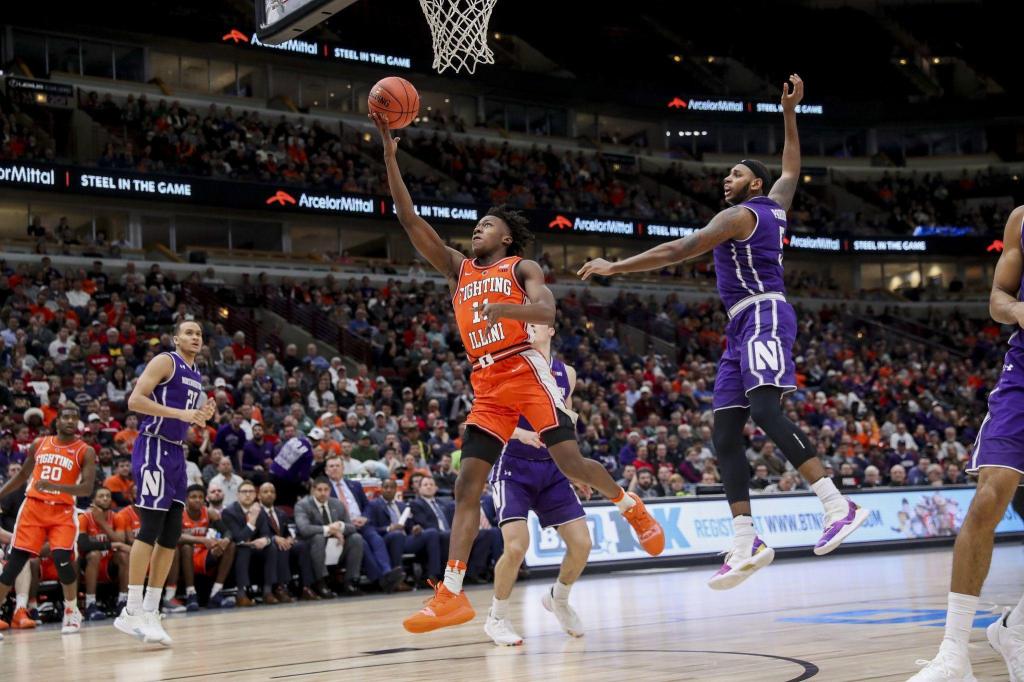 Kofi Cockburn knew that he entered the combined NBA draft this week in Chicago with a lot to prove.

After using the event as a growth experience last year, the former Illinois center is poised to enter the NBA next season. And despite second-round projections and questions about his perimeter skills, Cockburn believes he can make a name for himself as a pro.

“A lot of people doubt my ability to adapt to the NBA,” Cockburn said. “You can put me in any situation and I can definitely contribute. … The NBA is a completely different ball game. They have no idea what I am capable of, so they will always have doubts.”

Cockburn declared for the draft after his third season in Illinois after averaging 20.9 points and 10.6 rebounds and being named an All-American for the second straight year.

Standing 7 feet tall with a wingspan of 7 feet 4 inches, Cockburn’s size was his most obvious advantage at the combine. With another top center prospect in Chet Holmgren opting out of scrimmages to avoid injury, Cockburn outboxed him on Thursday and Friday.

Cockburn idolized Shaquille O’Neal as a young player learning to play in Jamaica, and that tough physique in the post dominates his style of play.

But the central role has changed dramatically since the O’Neal era, heaping new expectations on the big men.

Cockburn isn’t much of a perimeter shooter and he missed the only 3-pointer he attempted in Illinois. His agility was also a key emphasis for improvement throughout his college career, and he experienced a major improvement in his junior season. He still needs to develop that area of ​​his game to be successful in the NBA, where big men like Nikola Jokic and Joel Embiid regularly knock down 3-pointers to stretch the floor.

Cockburn remains a top-15 center with second-round projections, but his value could be limited as the position evolves.

Wednesday’s workouts highlighted Cockburn’s expected strengths and weaknesses. Despite shooting 14-for-25 from midrange, tied for first in the exercise, he was 14-for-25 (36th overall) on spot shots. He was also one of the slowest players in the shuttle run (fourth worst at 3.31 seconds) and the lane agility test (third worst at 12.11 seconds).

The two days of skirmishing allowed Cockburn to show off his painting skills. He had 11 points and 13 rebounds on Thursday, then had 19 points and 11 rebounds on Friday.

Although Cockburn said he wasn’t satisfied with the number of touches he received in practice, he emphasized the importance of showing teams that he can outrebound any opponent.

“I thought these guys were going to shoot, I was going to recover,” Cockburn said. “No team is going to put me on the star play. I’m going to have to find my role playing defense, speaking up, bringing positive energy and rebounding.”

Cockburn brought a boisterous presence to the court during practice games, shouting support to teammates from the sidelines and throwing an arm around opponents with a smile after fouls. When he tore through the rim with a two-handed dunk in the second half of Friday’s fight, Cockburn’s excited scream echoed through Wintrust Arena.

His success at the combine continued a week of good news for the Illinois program. Former Illinois teammate and Bulls shooting guard Ayo Dosunmu, a Morgan Park product, earned a spot on the All-Rookie second team on Wednesday, capping a breakout season.

Despite falling in the second round of last year’s draft, Dosunmu thrived after the Bulls drafted him with the 38th pick. He carried the mantle of starting point guard for most of the final third of the season, as injuries they plagued the starting lineup, averaging 8.8 points and 3.3 assists.

Although the Bulls need to beef up their interior to support center Nikola Vučević, Cockburn is unlikely to land in Chicago. The Bulls have yet to develop 2020 draft pick Marko Simonović, a 6-foot-11 Serbian forward who spent most of the season with the Windy City roster. This offseason, they’re looking for more developed talent to improve his size, while Cockburn will require longer-term development.

But Cockburn said he’s still counting on Dosunmu to put in a good word with the Bulls’ front office before the draft. The two still talk every day, a relationship Cockburn doesn’t expect to change even if they become opponents next season.

During the Bulls’ season, he called Dosunmu before every game for a pep talk. Dosunmu did the same thing before the combine.

“It’s him being that brother to me,” Cockburn said. “He is always looking out for me.”

The combine was a familiar experience for Cockburn, who underwent the process last year. At the time, Cockburn said it was a tough decision to go back to college. This year, that choice was easier, even with the potential for guaranteed NIL deals waiting for him in Champaign.

After taking 19 interviews at last year’s combine, Cockburn said he didn’t interview with any new teams this week, though his agent is arranging meetings with various teams.

Cockburn’s next steps will be decided on June 23 at the NBA in New York.