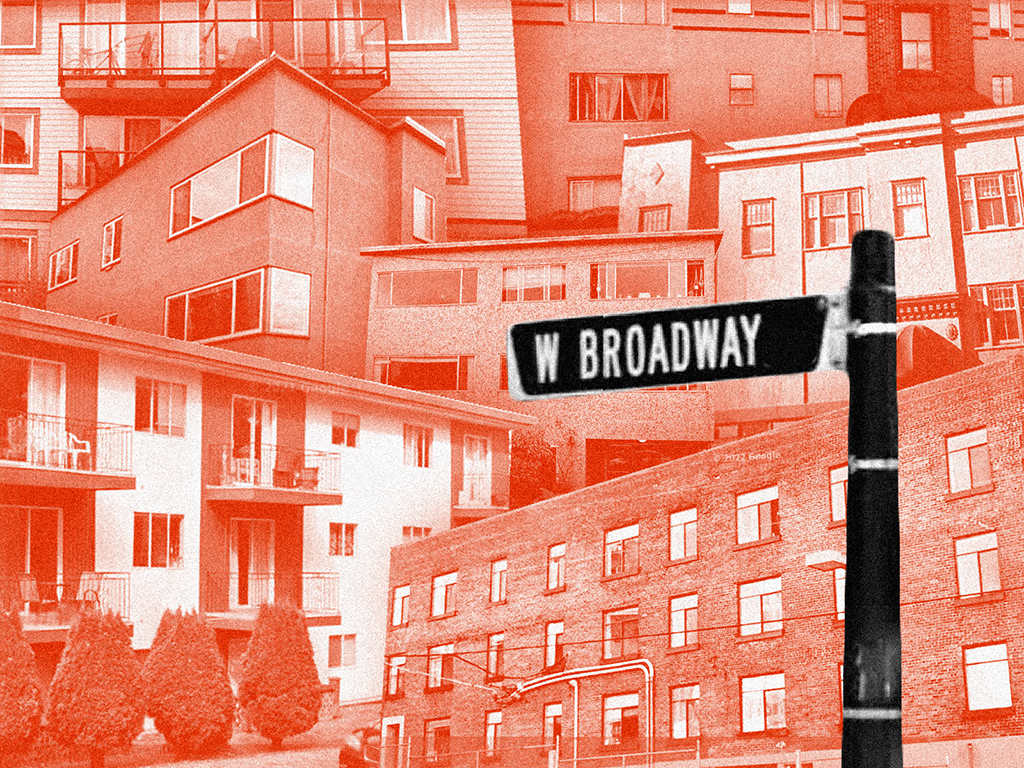 Announcements, events and more from Tyee and select partners

Accountable to you, we pursue the highest standards. Help us add 500 new returning members by June 13.

Construction of the Broadway Subway has begun and the plan outlines the densification of this important corridor. The corridor covers about 500 blocks bounded from north to south by First and 16th Avenues and from east to west by Clark Drive and Vine Street. The city council is currently hearing from a list of more than 200 speakers on the plan, and the public hearing will last through early June.

While there is intense support and opposition on everything from the size of the towers to the needs of future residents, one of the big questions is how existing tenants will be affected. The federal measure for unaffordable housing is spending more than 30 percent of a person’s income on housing. According to census data, 44 percent of Vancouver renter households live in unaffordable housing, nearly half.

The Broadway corridor is known for its rental stock. A quarter of the city’s purpose-built rental stock is here, from century-old brick buildings to post-war wooden buildings.

Rents have been kept relatively affordable due to the age of the buildings. The vast majority of this rental supply, 83 percent to be exact, is over 50 years old.

The big fear is this: tenant displacement as land values ​​around Broadway rise and rental apartments come under more dense redevelopment.

But Mayor Stewart says tenants need not worry because he has “their backs.”

So what is he proposing?

First, a displaced tenant will be relocated to a temporary rental. The developer will compensate them for the difference in rent to make sure they don’t pay more than before. Moving expenses will also be covered.

Then, when the new building is complete, the tenant will be invited to return to a unit in the new building. They will have the ability to rent that unit at 20 percent below the city average, according to data from the Canadian Mortgage and Housing Corp.

Of course, Vancouver rents are getting higher, so if their discounted rent in the new building is higher than what they paid before the property was rebuilt, they can opt for the latter. They could also choose not to move into the remodeled building and receive a cash payment from the developer, based on how long they lived in the old building.

“This is actually grabbing the market by the throat,” he said.

On the supply side, the Broadway Plan calls for homes in the area to be one-third condominium and two-thirds rental, which includes market units, below-market units, and affordable housing.

In the first 10 years of the 30-year plan, the city expects 1,500 below-market rental units and 930 affordable housing units. The city generally defines social housing as units that are managed by a government or non-profit agency, rent below market rates, and may offer services related to health, substance abuse, and skills training. life.

The city plans to give additional density to developers who are willing to build rental housing, with different percentages for different types.

He hopes the city council will approve the plan, with the tenant protections proposed by the mayor.

Before Mayor Stewart was elected, he was MP for Burnaby South. In the 2010s, old apartment buildings were destroyed en masse and their residents evicted to make way for condominium towers next to the Metrotown SkyTrain station. The Vancouver City Council wants to avoid the same situation.

Yet another group of tenants is skeptical of the mayor’s big promises.

“None of those words matter on paper if they are not applied. We don’t think they will be enforced,” said Mazdak Gharibnavaz, an organizer with the Vancouver Tenants Union.

His group recently created a tenant plan for Broadway, which contains survey results showing that many tenants pay much lower-than-market rents. This is because they have lived in the units for so long, having been locked out of rent control when rents were cheaper.

Gharibnavaz worries about the landlords’ ploys because their profits could be much higher if they rented out their units to new tenants at current market rates.

In a 2020 scenario, the city said it was “disappointed” with how a developer-owner chose to interpret compensation offered to tenants they displaced. In short, the developer-owner pushed leases at the higher market rate instead of the cheaper rent paid by tenants in the old building. The developer-owner offered some rebates as compensation and said he was meeting the city’s requirements.

Gharibnavaz complains that the city does not have an enforcement body to ensure that developer-owners follow required tenant compensation and relocation policies as intended.

The group has long been lobbying the province to tie rent control to units rather than leases so that landlords have no incentive to evict their tenants.

“The transit project and the Broadway Plan are scary things for tenants,” Gharibnavaz said. “But this is also a once-in-a-generation opportunity to really organize a movement that will not allow what has been the status quo for decades to continue.”

Remodeling takes years, and tenants who relied on the location of the Broadway corridor may be displaced to another part of the city, even if they pay the same rent, the group says. Gharibnavaz is concerned that older people or people with disabilities may be relocated to a remote location causing hardship.

The group is also concerned that tenants will eventually be relocated to much smaller homes, as is the case with units in newer buildings. The group wants the city to require minimum unit sizes to account for different life stages and family compositions.

Is it time for tenants to unionize?

With the Broadway subway causing land prices to rise, Gharibnavaz wants the city to buy property in the area early to keep valuable land in public hands to use for a social purpose like housing.

“We never hear about solutions to maintain or reduce land prices,” he said of governments. “They have a financial interest in the development for profit in the future. It makes them money.”

The planning process for Broadway has once again led the Vancouver Tenants Union to ask big questions about who is displaced in the city’s building decisions, says Gharibnavaz.

“Single family home lots – how come they are never seen as the thing to look for? How come they are always tenants? The answer is obvious: politically, the interests of landowners have a very high priority. That’s really the simple point of this. We need to get society to a point where governments fear tenant power more than landlord dissatisfaction.”

Hot, Hot Housing is a column about the housing crisis in Vancouver and beyond, published in The Tyee every Friday. Do you have your own home stories? Whether it’s market shenanigans, leasing horrors, or survival tips, you can email us at housing@thetyee.ca.