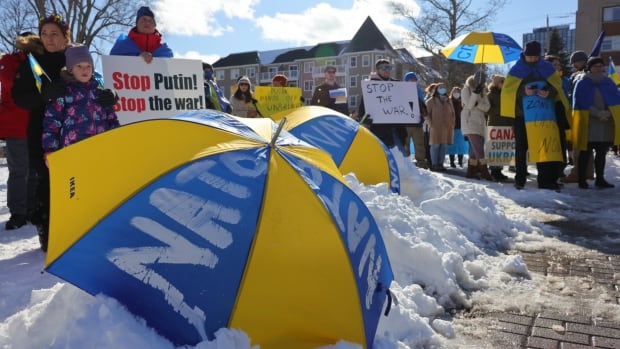 About 200 people gathered in a Halifax park on Saturday to show solidarity with Ukraine as Russia’s invasion of that country continues, with many supporters urging the Canadian government to do more to help.

Under sunny skies, people held Ukraine’s blue-and-yellow flag and placards denouncing Russian president Vladimir Putin, including one sign that said: “How can we do homework while my family is being bombed in Russia.”

Many donned sunflowers, the national flower of Ukraine, which has emerged as a global symbol of solidarity for the country and its resistance against Vladimir Putin.

The war in Ukraine raised fresh global alarm Friday after Russian forces attacked a key nuclear plant in the south. Officials say the fires that ensued have now been extinguished and that no radiation leaks have been detected. Ukraine’s president, Volodymyr Zelensky spoke with world leaders just after the attack, including Prime Minister Justin Trudeau. Meanwhile, Russia continued other attacks on cities throughout Ukraine overnight.

Many speakers at the Peace and Friendship Park in the city’s south end spoke of the need for the Canadian government to increase its military efforts against Putin.

So far, Western countries like Canada have been imposing sanctions and sending lethal aid to help the Ukrainians carry out their own fight.

Adriana Dolnyckyj’s father came to Canada from the Ukraine when he was nine years old. She said sanctions aren’t enough to stop Putin.

“It’s important for people to show up, stand up to a tyrant and a bully and give our leaders the courage to fight back,” said Dolnyckyj, choking back tears as she spoke.

“Ukraine has shown that it’s ready to fight, but we need your help to keep fighting. He’s not going to stop at Ukraine.”

Dolnyckyj added that she has a family still in the Ukraine and would “rather be there than here.”

“But this is all I can do right now,” she said of being at the rally.

Trudeau said Friday his government does not want to see an escalation of the war that would pull NATO forces into “direct conflict” with Russia in eastern Europe.

He said Canada and its allies are focused on delivering economic body-blows to the Russian economy as payback for the invasion — and are not going to establish a no-fly zone over Ukraine.

A NATO-enforced no-fly zone would mean Western forces would be responsible for keeping Russian warplanes out of the skies over Ukraine. That could result in direct combat between NATO forces and the Russian military.

But Andrey Cheremskoy, who is originally from the Ukraine but is now living in Halifax, said a no-fly zone needs to be established.

He has a family still in Ukraine and fears for their safety.

“It’s very stressful because [you’re] kind of just hopeless. You don’t know what [else] you can do So that’s why we’re here,” said Cheremskoy.

“My father is living there in the Ukraine and also his cousins ​​there in Kharkiv, and they sleep in the subway and they’ve got friends… that are still there and they live with their kids in basements.”

A number of municipal, provincial and federal politicians were at the rally, including Halifax Mayor Mike Savage and MP Andy Fillmore.

Supporters were also collecting for the Canadian Red Cross, which is raising money to assist with an unfolding humanitarian crisis in Ukraine.