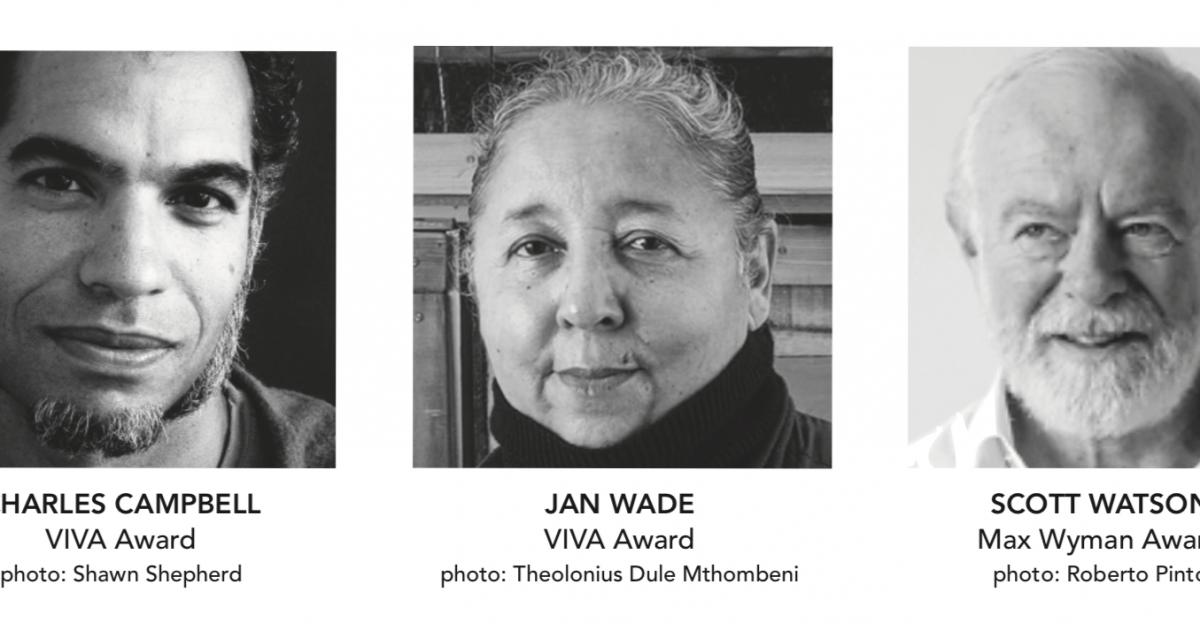 The Jack and Doris Shadbolt Foundation has announced the winners of the 2022 Max Wyman and VIVA Awards.

The two VIVA Awards this year have been awarded to the artists Jan Wade and Charles Campbell; UBC professor and curator of contemporary art Scott Watson received the Max Wyman Award for Critical Writing.

The VIVA Awards, founded in 1988 to promote the visual arts in BC, are worth $15,000 and are awarded annually to mid-career BC artists who show “outstanding achievement and commitment” in their work.

(In years that the Shadbolt Foundation awards the biannual Alvin Balkind Curator’s Prize, one VIVA Award is awarded; two are awarded the following year.)

The Max Wyman Award carries with it a $5,000 prize, as well as a special emerald and gold brooch designed by Robert Chaplin, a Vancouver artist and jeweler. It has been awarded by the Yosef Wosk Family Foundation in collaboration with the Shadbolt Foundation since 2021 and was founded by philanthropist Wosk in 2017 to honor Vancouver journalist, art critic and author Max Wyman.

A statement from the Shadbolt Foundation said the award recognizes “informed and compelling writing that stimulates critical thinking, fosters ongoing debate about the role of the arts and culture in contemporary society, and demonstrates the value of creative commentary in our understanding of the world around us.

An African-Canadian painter and textile artist who creates mixed-media assemblages and text pieces, Wade moved to Vancouver from Hamilton, Ontario, in 1983.

The foundation’s statement noted that his works, often made from recycled and found materials such as “antique buttons, coins, shells, Scrabble tiles, pop culture figurines and religious symbols,” are heavily influenced by blues musical traditions. and jazz.

Prior to Wade’s recent solo show at the Vancouver Art Gallery, Jan Wade: Soul Power, he exhibited primarily in small public galleries in the US and Canada.

A multidisciplinary artist and writer/educator based in Victoria, Campbell was formerly Chief Curator of the National Gallery of Jamaica and currently holds the title of Associate Curator at the Confederation Center Art Gallery in Charlottetown.

Historical slavery and colonialism in the Caribbean region inform much of his work. Campbell, who was born in Jamaica and raised in Prince Edward Island, is currently studying the black pioneers of BC.

Campbell has exhibited extensively in North America and Europe.

Watson, a UBC professor, writer and curator, who is director emeritus and researcher at UBC’s Morris and Helen Belkin Art Gallery, has won awards for curating and writing, among other distinctions, during his more than three decades of work. professional.

Max Wyman’s jury citation reads, in part, “…his informed and accessible curatorial commentary leads the viewer not only to new insights about the work under discussion but also, more generally, to a new understanding of the relationship of art with contemporary society. His human and insightful writings…directly epitomize the values ​​for which this award was established.”