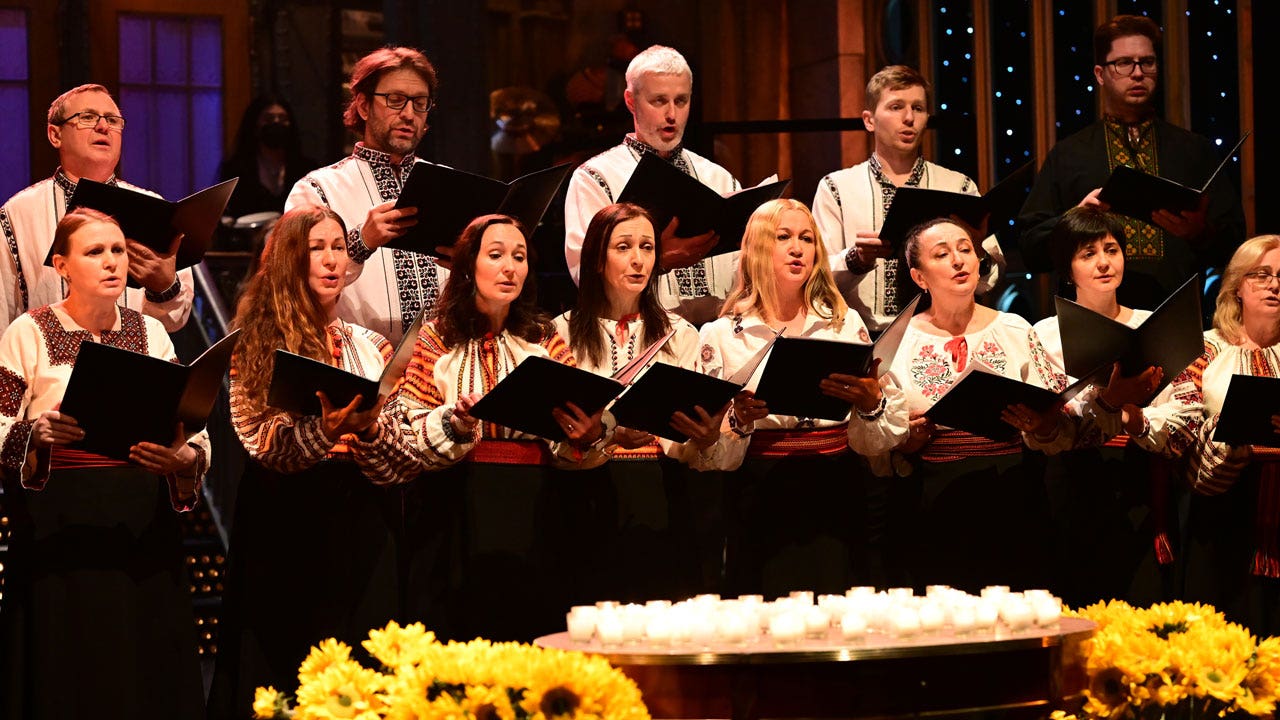 Candles on the stage spelled out Kyiv, the capital city of Ukraine.

Two members of the chorus explained the message the group hoped viewers would take from the performance to Fox News Digital.

“The main message that we hope viewers will get from our performance is the following: It’s time for all of us to launch our culturally informative counteraction against Russian propaganda,” Nataliya Yezersky said. “During the wartime, if the chance presents itself to spread the truth about who is who and what is what, no one should remain indifferent but act immediately. It’s exactly what Dumka did last Saturday.”

“Our message is for people to learn about the Ukrainian language, culture and the strength of our people,” Solomiya Koziy added. “To share some of the feelings that we Ukrainians feel; although it is only a small part of what people in bomb shelters are feeling right now. It is our duty here overseas to spread information about what’s going on and show the strength of our nation The true colors of the situation. The genuine belief of our people. The pain of our people.”

One member of the group explained the performance was meant to be a “culturally informative counteraction against Russian propaganda.”
(Will Heath/NBC/NBCU Photo Bank)

The Ukrainian Chorus Dumka of New York’s decision to sing mirrors Ukrainian history, according to Yezersky.

“In 1922, when Ukrainian independence, threatened by the Russian Bolshevik army, was in peril, the Ukrainian government came up with a very interesting idea to let the world know about Ukraine not by military success, but by promoting Ukrainian culture,” she explained to Fox News Digital.

“The Ukrainian National Choir Dumka came to New York to perform at Carnegie Hall. It was the first time the American audience heard ‘Shchedryk’ written by the Ukrainian composer Mykola Leontovych. Today, ‘Shchedryk’ is known as ‘Carol of the Bells’ and is considered a must-play Christmas song.”

HOLLYWOOD HITS RUSSIA WITH ITS OWN FORM OF SANCTIONS – BARRING CONCERTS, MOVIE FESTIVALS AND MORE

“In 2022, due to the same very unfortunate circumstances that entail a great danger for Ukraine’s independence, the Ukrainian Chorus Dumka of NY went on stage to raise awareness about the peril of World War III.”

The overall response to the chorus’ performance has been “extremely positive,” Koziy told Fox News Digital.

“Many people have retweeted, reposted and shared our prayer,” she said.

Koziy also explained the dangers of disinformation amid the ongoing conflict between Russia and Ukraine.

Russian agents are spreading propaganda in order to scare people, according to Koziy. Misinformation allegedly spread by Russia includes the Ukrainian government fleeing the country and Russian diversion groups posing as Ukrainians attempting to evacuate citizens in order just to capture and harm them, Koziy explained.

“Check your sources before posting anything. Check before believing something you see on the internet,” she cautioned. “Don’t immediately support or judge in the comments. Check first. Share true information with others. Check with other Ukrainians. Get insight into the situation from the people whose relatives and friends are there, from the people who are informed of the reality .Share only trustworthy and trust-only verified information resources.This will save lives.”

The invasion comes after Russia spent time at the end of 2021 amassing troops at a border it shares with Ukraine. At the beginning of the invasion, an estimated 190,000 troops were stationed at the border, according to the BBC.

The move follows Russia’s annexation of the Crimean Peninsula from Ukraine in 2014.