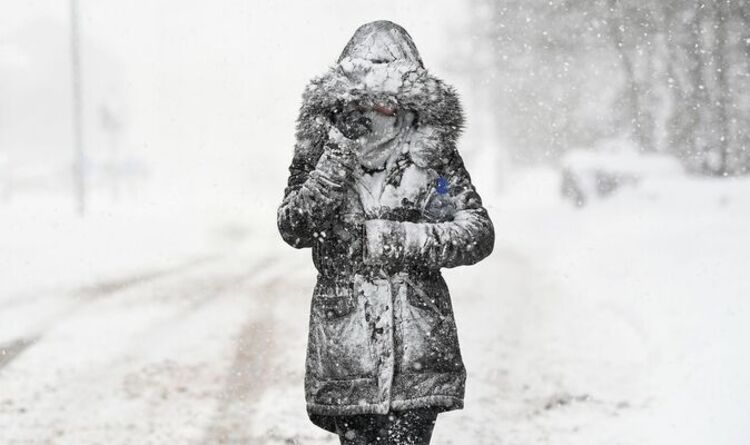 Met Office forecaster Alex Deakin said that a high pressure is trying to push in from the Atlantic which would mean clear skies and sunshine but another weather front is sticking on the east of the country that is bringing cloud and rain.

The temperatures will be cold, especially overnight.

“Under the cloud and rain with that weather front the temperatures will hold up a few degrees above freezing but elsewhere certainly getting close to freezing even in towns and cities, and in rural parts we will be well below, maybe -5C in one or two locations across Scotland and Northern Ireland.”

There is likely to be an east-west divide with cloud and rain to the east of the country where a weather front persists.

Mr Deakin continued: “A cold start here (in the west) to the weekend, a frosty old start but we should see plenty of sunshine, maybe a little bit of morning fog in a few spots.

“Sunny spells too for Wales and western England.

“It’s further east where we are going to have this cloud and rain.

“Now some uncertainty about how far it is going to creep, whether the rain is going to come and go all day or whether it will be stuck under persistent rain but there is the threat of that certainly for East Yorkshire, Lincolnshire, East Anglia and the South East. It looks pretty damp here.”

He added: “Under the cloud in the east 5 or 6C, maybe squeezing up to 7C in Norwich and London, that is going to feel grim for the time of year.”

For next week the icy conditions remain with the threat of wind and snow as the weather becomes less settled.

The Met Office stated: “Sunny spells with some cloud for most at first during this period, with generally stronger winds than previous days and the ongoing risk of Wales in the far west and northwest.

DON’T MISS:
Elon Musk sends second round of aid
Russian tank stuck in mud for hours ‘an example of poor planning’
MoD snubs Putin and state ceasefire was ploy to ‘reset forces’ after…

“Temperatures looking to be rather below normal and perhaps feeling cooler in the wind.

“Through the period, frontal systems push eastwards which are likely to bring strengthening winds in addition to potential snowfall.

“The main impacts are likely to be from heavy rain and Wales during this time.

“Nearer to the end of this period, there is looking to be a transition from these rather cold conditions to near normal and milder conditions.

“This is likely to include clearer weather with showers across all areas.”