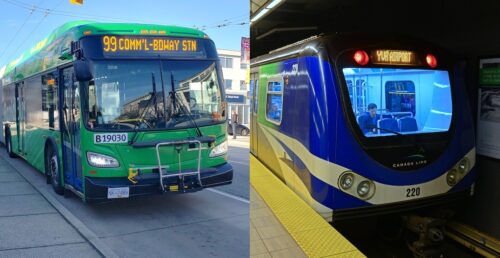 TransLink’s annual ridership report, called the Transit Service Performance Review, for 2021 shows that the Metro Vancouver transit system has a stronger ridership recovery than most major systems in Canada and the United States.

By the end of 2021, TransLink’s passenger recovery rate reached 59% of pre-pandemic volumes, outperforming mass transit systems in cities such as Montreal, Toronto, Washington DC, Chicago and San Francisco. As of May 2022, the recovery in passenger numbers has grown further to 70%.

TransLink ended 2021 with a total of 224 million boardings, which is the level of annual ridership the system saw in the late 1990s. However, ridership has rebounded considerably since last year: the May 2022 passenger volume is roughly equivalent to the passenger level experienced between 2015 and 2017, with passenger numbers expected to further recover to 80% to 90% of pre-pandemic volumes by the end of 2022.

But the recovery in ridership in 2021 was not equal across transport modes, with buses leading the recovery at a rate of 62% of pre-pandemic volumes. It was followed by HandyDART with 50%, SkyTrain Expo and Millennium Lines with 57%, SkyTrain Canada Line with 54%, SeaBus also with 54% and West Coast Express with 26%.

The Vancouver/UBC sub-region accounts for 47% of the region’s total ridership, but this represents a 6% decrease compared to pre-pandemic 2019. Downtown Vancouver and Central Broadway, this subregion’s ridership recovery of 54% in 2021 was the lowest of any subregion. 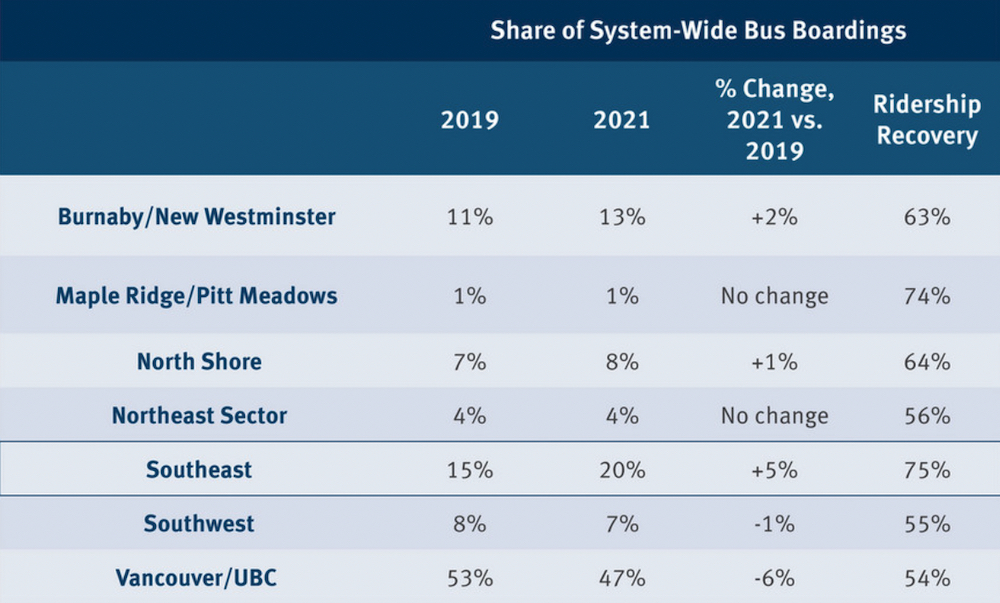 The 99 B-Line remains Metro Vancouver’s busiest bus route, albeit with an average of 29,000 weekday boardings in the fall of 2021, even as students and faculty return to the University of British Columbia campus ( UBC), its ridership remains well below the 2019 pre-pandemic average of 57,000 on weekdays.

In total, seven bus routes serving Vancouver/UBC were among the top 10 busiest routes in the region in fall 2021. 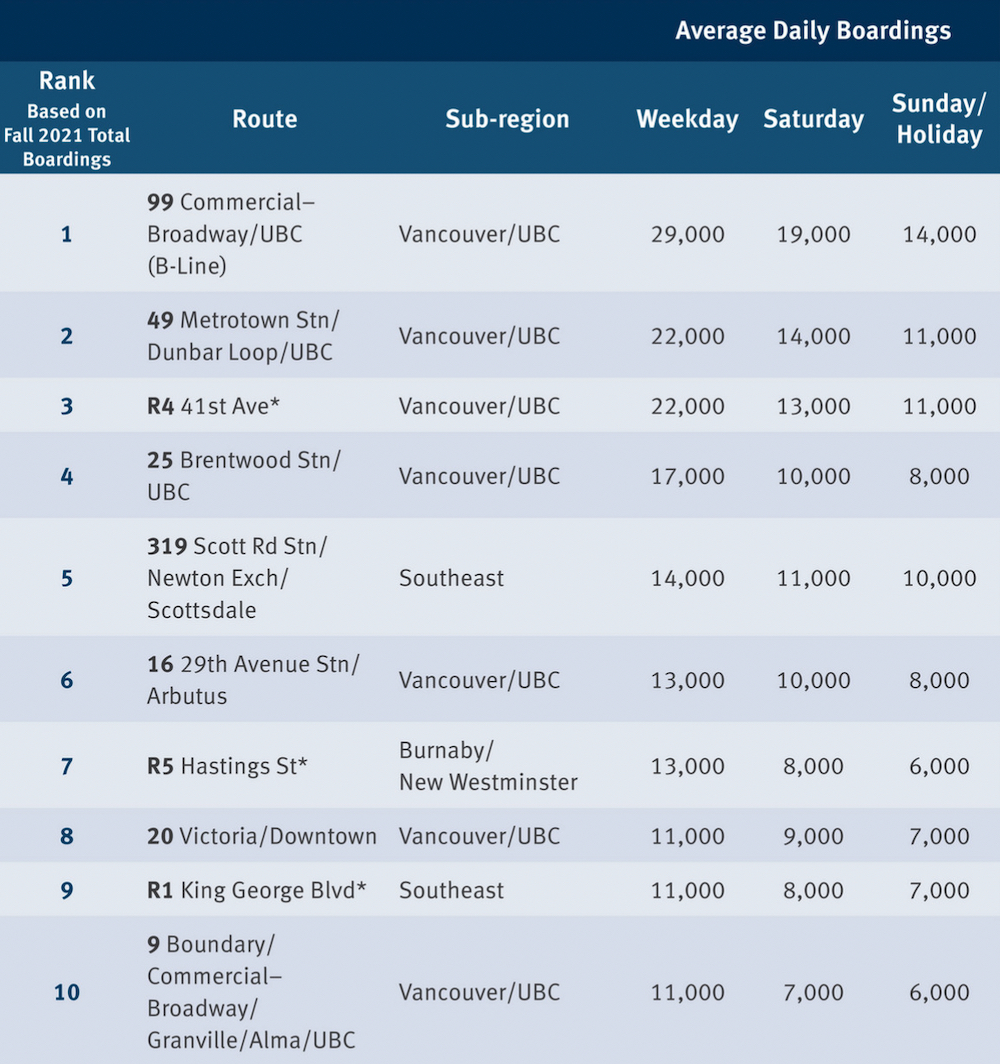 Bus routes with the highest number of passengers in Metro Vancouver, fall 2021. (TransLink)

Fall 2021 ridership statistics show that R4 41st Avenue RapidBus, between UBC and Joyce-Collingwood Station, is the busiest RapidBus route and the third busiest bus route in the region, averaging 22,000 boardings on weekdays . 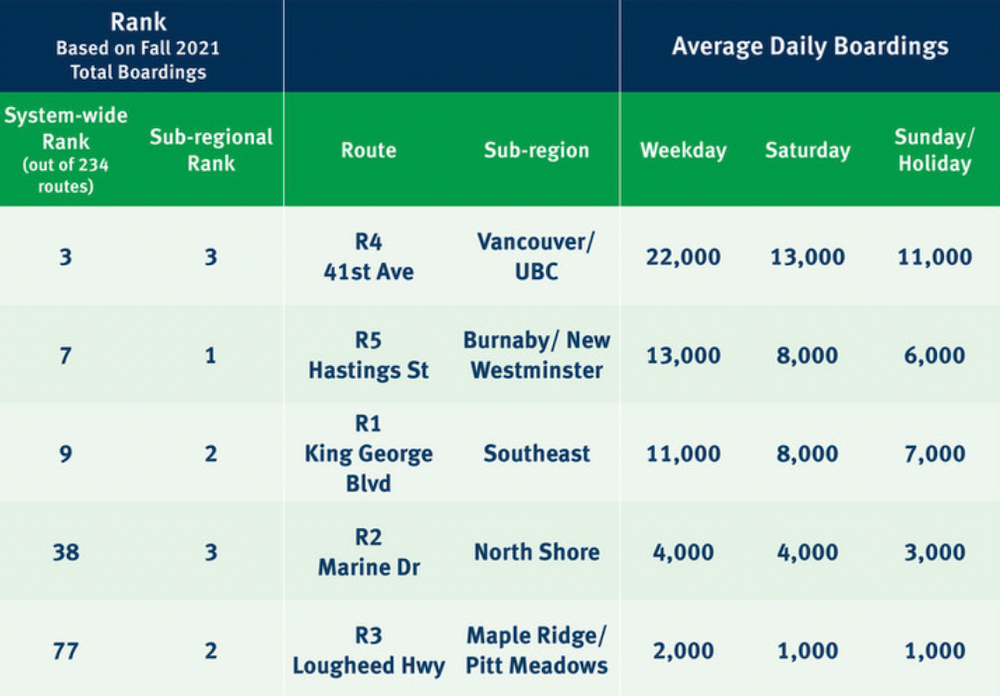 The Waterfront, Metrotown, Commercial-Broadway, Burrard, and Granville stations continue to be the busiest. But the Vancouver city center station fell from sixth busiest in 2019 to eighth in the fall of 2021, while Joyce-Collingwood station, likely with the help of the R4 RapidBus, rose from ninth in 2019 to sixth in the fall of 2021.

Stadium-Chinatown and Main Street-Science World stations dropped out of the top 10 in the fall of 2021, pushing Surrey Central and King George stations into the top 10: 9th busiest and 10th busiest, respectively. 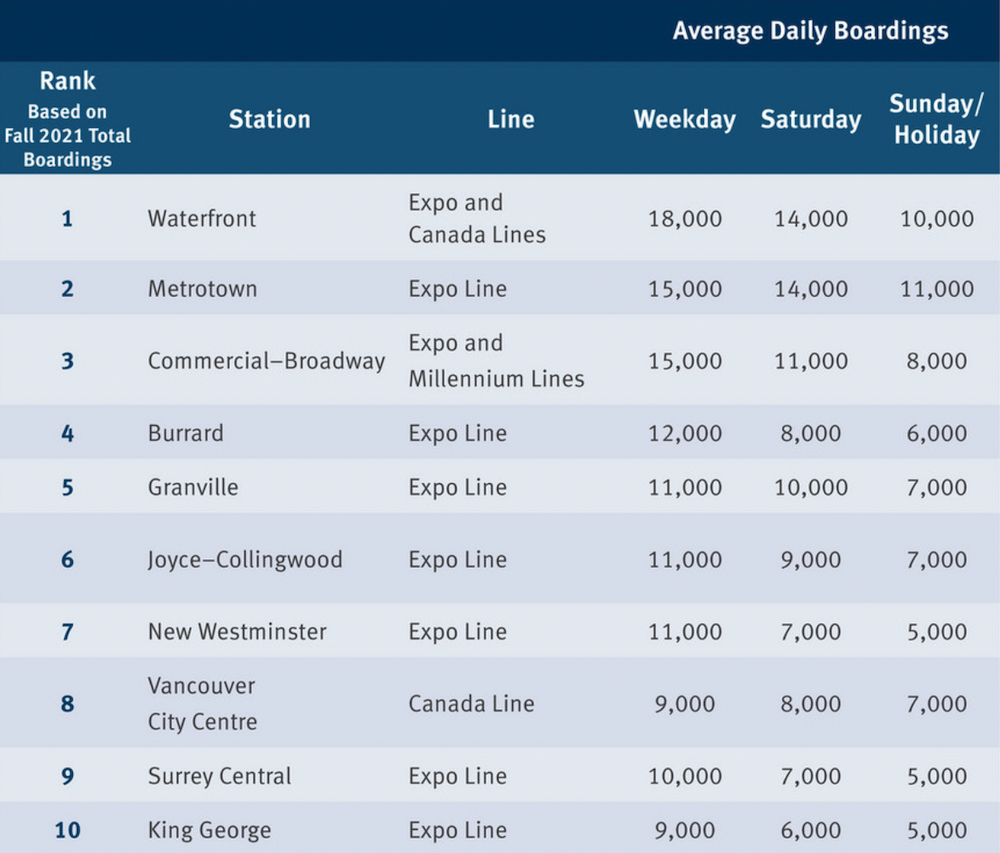 SkyTrain stations with the highest number of passengers, fall 2021. (TransLink)