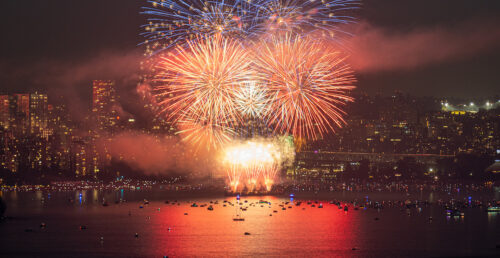 Team Spain provided the closing curtain for the 30th anniversary of the Honda Celebration of Light Vancouver fireworks competition on Saturday night.

Pirotecnia Zaragozana, a 162-year-old Spanish pyrotechnics company, lit up the night sky with its “Heroes” themed pyromusical, as a tribute to the essential workers of the pandemic.

To deliver this tribute theme, the company compiled a soundtrack with songs that literally included “Heroes” in their titles and lyrics.

Vancouver Police did not report any issues resulting from the event, but the night saw the largest crowds over this year’s three-night event, with police closing access to the main portion of English Bay Beach at around 9 pm due to the area reaching capacity. This was not done for the previous two nights.

The final night of the Honda Celebration of Light typically sees the largest crowds — approximately 500,000 spectators in and around English Bay — as it coincides over the BC Day long weekend.

Team Japan kicked off the first Honda Celebration of Light since 2019 on July 23, followed by Team Canada on July 27 and Team Spain on July 30. The winning team for the 2022 fireworks competition will be announced on August 1.

“Heroes (we could be)” by Alesso closes the 30th annual Honda Celebration of Light!

Tonight’s theme: A tribute to frontline workers, the Heroes of the pandemic.

Heavenly @CelebOfLight? Check out the cheeky meteor that tried to steal the #fireworks show in #Vancouver at around the 7 second mark. 📹by Mike Cook. @globalnews @GlobalBC pic.twitter.com/5t6GOKhGBA

tonight’s #Vancouver #fireworks from a “quiet” #kits side street pic.twitter.com/iYVeglKDHf

Last night of fireworks in #vancouver ! I kinda have the best seat in the city!#CelebrationOfLight pic.twitter.com/lj037b40ym