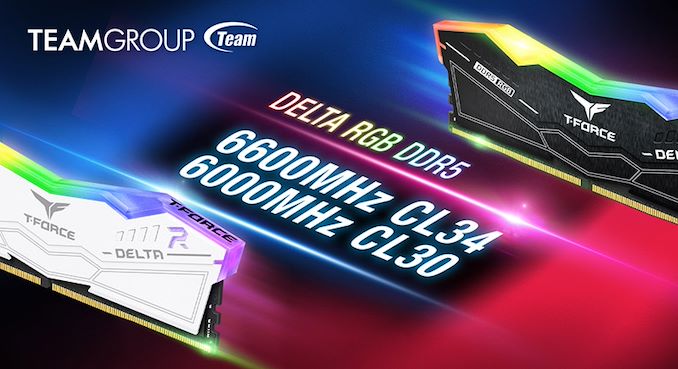 Memory vendor TeamGroup has announced two new T-Force Delta RGB DDR5 memory kits during Computex 2022 in Taipei, Taiwan. This includes a high-frequency kit clocked at DDR5-6600 with CL34 latency, as well as a low-latency kit running at DDR5-6000 CL30. Both will be available in black or white and will come with RGB LEDs.

Intel was the first company to introduce DDR5 memory to the desktop market in November 2021 with its 12th Gen Core processor series. During its keynote address at Computex, AMD announced that its latest Ryzen 7000 processors, due for release this fall, will also support DDR5 memory, among many other exciting features. We tested how well DDR5 memory scales on Intel’s 12th Gen Alder Lake platform, and it pays to use high frequency and low latencies to maximize performance.

TeamGroup intends to add two new speed grades of its T-Force Delta RGB DDR5 memory, one with DDR5-6600 CL34 specifications and one with DDR5-6000 CL30 specifications. Both variants will be available in 32GB (2 x 16GB) kits, with options including a striking white or subtle black heatsink. Both color schemes include a 120° angled RGB-enabled light bar with intelligent RGB customization control. TeamGroup claims to use carefully selected memory ICs, but does not specify which manufacturer’s DRAM the kits will use.

The TeamGroup T-Force Delta RGB DDR5-6600 CL34 and DDR5-6000 CL30 are expected to hit retail stores in July, but we currently have no pricing details.