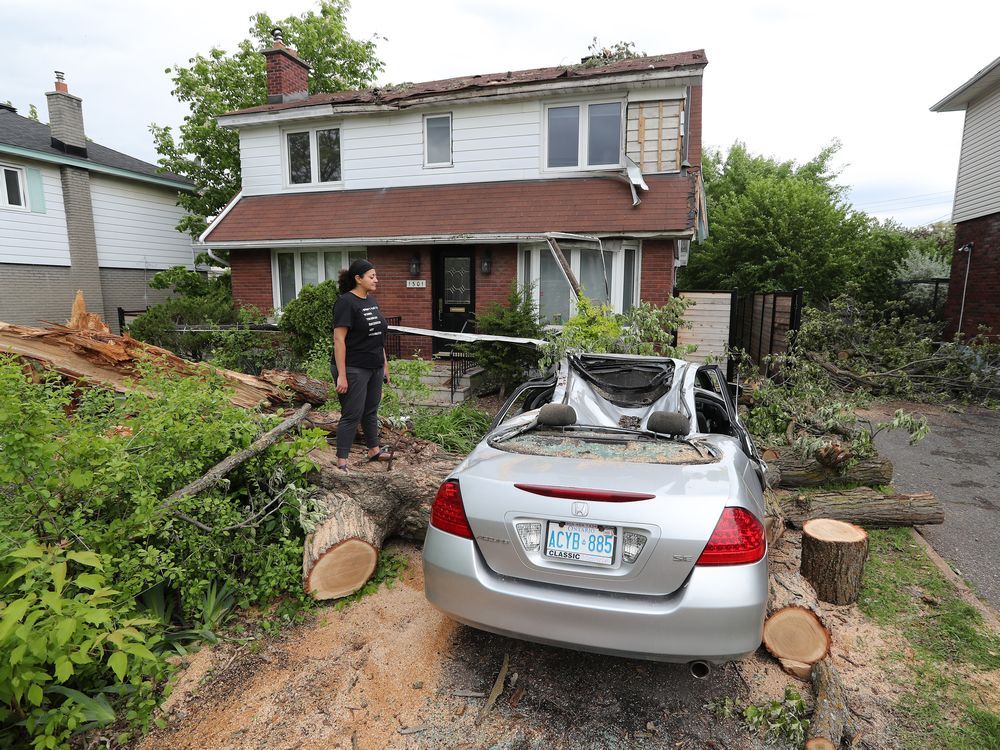 While not wanting to sound too dramatic, Reem Mahmoud said she saw her life flash before her eyes during those few minutes of Saturday’s storm as she watched the 200-year-old heritage tree in her front garden snap in two, half destroying her car. , the other half damaging their house.

Mahmoud was at his home on Kilborn Avenue with his five-year-old son, Zachary Ettles, when the storm hit. Husband Steven Ettles was an hour away at her cabin, while his 7-year-old son Zane was at a birthday party. The plan was to pick up Zane after the party and then drive to the cabin.

“I never see storms,” ​​Mahmoud, 41, said from a nearby hotel room Thursday night. “I don’t like storms. I am afraid of storms. I grew up in Egypt, where it’s hot and summery all the time. You get sandstorms, but not crazy rain like this.”

On Saturday, inexplicably, he decided to look from the bay window that overlooked his front yard and the entrance of his house. “I thought, ‘Let’s see, and as soon as it’s over, we’ll find your brother and hit the road.'”

The storm, she recalled, had barely begun when she saw the tree, so big she and her husband couldn’t hug it and touch hands, fall on their Honda Accord, destroying the vehicle.

“I was terrified. I’m not exaggerating, I saw my life flash before my eyes. And I thought, ‘What’s next? It’s going to fall on the house.'”

Unbeknownst to her, it had already done so, damaging the ceiling and the walls and ceilings of the second floor. With the power out, Mahmoud, who was on Facetime with her husband, took Zachary into the basement to wait while neighbors started calling to check on him. A friend picked up Zane, while Mahmoud spent 20 minutes contacting 911. By chance, a firefighter attending a nearby house took a look at his house and recommended that he turn off the power to prevent a possible fire when service is restored. .

The power only came back on Thursday night and Mahmoud still doesn’t know how much it will cost to repair the damage. It’s just a car. It’s just a house. That’s my insurance company’s problem. The important thing is that no one was hurt.”

Still, she is grateful she didn’t try to leave her house when the storm hit and wonders if her only sister, who died at 36 while giving birth last summer, somehow had something to do with that decision. “We weren’t twins, but we were like twins, and I felt like she was taking care of me, maybe protecting me and my son from the tree.

“But it was one of those moments where you realize life is really short.”

Sign up for daily headline news from the Ottawa Citizen, a division of Postmedia Network Inc.

The next issue of the Ottawa Citizen Headline News will be in your inbox soon.