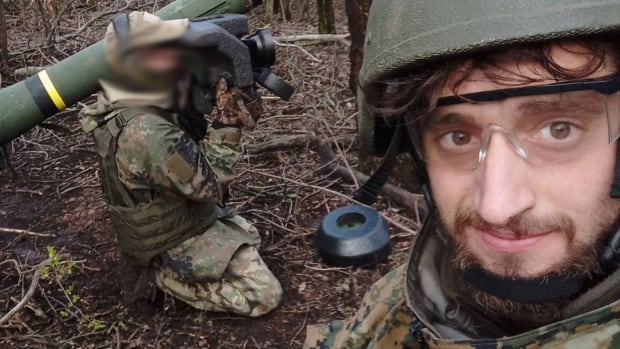 It happened in a fraction of a second.

About 10 days ago, a Russian tank that Shadow and a fellow Canadian, the sniper known as Wali, had been quietly stalking in the Donbas region of eastern Ukraine turned and fired on them.

Two Ukrainian soldiers with them had ignored Wali’s advice a moment earlier and emerged from the deck of their observation post, nothing more than a trench, to smoke a cigarette.

Shadow, the nom de guerre of a former Canadian soldier from Sherbrooke, a member of the Royal 22nd Regiment who later served as a weather technician in the navy, was about to join his Ukrainian friends when the tank opened up and launched a shell. between the two Ukrainians.

Shadow was thrown back into the trench, his ears ringing from the explosion. He crawled up, poked his head out, and was greeted by a scene of total carnage.

One of the men had died instantly. The second Ukrainian soldier was still alive, but just barely.

“He was like a couple of feet from me and he was still breathing, but he had no legs,” Shadow told CBC News Thursday in an interview in Lviv, western Ukraine. “And then we made eye contact. I looked at him, he looked at me.”

It took a couple of moments for the soldier to die.

CLOCK | The ‘hell’ of the battle in the Donbas region:

A former Canadian soldier who joined the fight in Ukraine has one word to describe the Donbas region: hell. 0:44

The brutal and capricious nature of war, the way ordinary moments can suddenly turn deadly, seems to have settled on Shadow in the days since he left the front lines in the beleaguered Donbas region, where Ukraine is holding back the weight of the Russian army.

Two of the thousands of volunteers who flocked to Ukraine after President Voldomyr Zelensky’s appeal to foreign fighters, Shadow and Wali were a couple almost from the start.

On that day in late April, they had been helping to hunt down a Russian tank regiment that had become stuck in the side of a scorched valley.

‘We have to get out of here’

Wali, a fellow Van Doo and sniper with combat experience in Afghanistan, was maneuvering to shoot one of the Russian iron monsters with an American-made Javelin anti-armor missile.

The tank had been tantalizingly out of reach before it turned on them and struck.

Wali, who was interviewed by CBC News in early March, was unwilling to give up even after the Ukrainian soldiers were killed. Shadow said that as Wali searched for the best position to shoot, he knew they were outmatched.

CLOCK | Shadow describes being under fire in Irpin:

They slipped away with the tank firing behind them.

“So yeah, that was my last patrol on the eastern front,” he said. I have a word to describe [it]And it’s just hell.”

The last two months for Shadow have been a crazy kaleidoscope of shootouts and near misses, nothing like the somewhat tame life he experienced for a dozen years in a Canadian uniform.

His first time in combat, ever, saw him thrown into pitched battle for Irpin, a once-pleasant wooded community 20 kilometers west of kyiv that turned out to be the high point of the Russian advance on the capital.

CLOCK | A close call in a Donbass trench:

The close call of a Canadian in a Donbass trench

A former Canadian soldier now fighting in Ukraine survived a Russian tank attack in Donbas, but his friends did not. 3:37

Shadow was tasked with helping Wali carry ammunition and watching his friend’s back. During a Russian assault, the two men were driven from their sniper nest by a shell.

“We got hit by a tank,” Shadow said. “He bombed the building and missed us by, like, ten feet. After that, we started getting more small arms fire, and then we came out of the building, and after that…a big gunfight.”

“I haven’t… that was my first shooting. The Russians were like 50 meters from us, bullets were flying everywhere, everywhere. We couldn’t do anything, and they actually tried to surround us.”

One of the other soldiers with them responded with a rocket-propelled grenade, giving everyone enough cover to retreat, jump into a pickup truck and speed away before being passed.

bodies in the streets

In late March and early April, Shadow and Wali participated in the liberation of Irpin as Russian forces withdrew from northern kyiv and concentrated their forces in the eastern Donbas region.

There is a hint of bitterness in Shadow’s voice as he reflects on what he saw and the toll the war has taken among civilians.

“We are talking about civilians dying every day,” he said. “I was fighting in Irpin, and then mass graves were found in Bucha, right? …

“If NATO had stepped in, the war would have been over in less than a week, but because everyone sat and watched, well, we’re seeing all those civilians dying.”

He said he is equally skeptical about the West’s approach going forward. What Ukraine needs, he said, are boots on the ground.

“That’s what we need,” he said. “Prayers? Sorry, but it does nothing. Money? Yes, it helps. Armaments? Yes, it helps, but at the end of the day, the Ukrainians are left alone to fight Russia.

After too many close calls, he said, he will not return to the eastern front.

“I did my time there. For now, I will do humanitarian aid. I will stay here in Lviv and be as helpful as I can.”