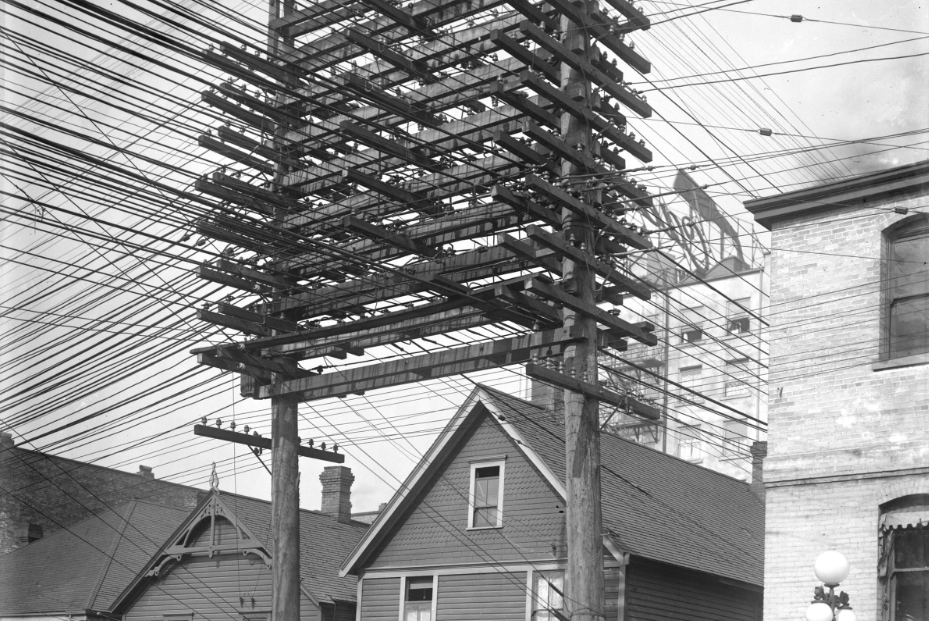 Electricity was still a new technology at the time.

H-frame power poles are still a thing in Vancouver, but it’s been a long time since they’ve looked like this.

In a photo from the Vancouver City Archives, the 1914 photo shows how electricity moved more than 100 years ago, with a dense H-shaped pole supporting dozens and dozens of wires.

Since the beams on the right side appear to have connections for five or six cables, and are nine high, that would be about 50 separate cables going in one direction. It’s not clear how many run perpendicular, but there are 11 beams between the two support posts. Electricity had only been in the city for a couple of decades and cities all over the world were adapting to the new technology.

The photo, taken at Main and Pender streets, shows what appears to be a Chinese laundromat with the pole in front. A couple of figures to the left of the image help give the massive structure some scale (it appears the exposure took a moment as other figures can be blurred by motion).

At the time, the Vancouver City Hall was still located in Gastown, and can be seen in the background, according to the archive site. Although the city hall has relocated, H-posts are still used in that neighborhood, although they are much rarer now. Heritage Vancouver is looking to make a case to save them.

Electricity had only been in the city for a couple of decades and cities all over the world were adapting to the new technology.