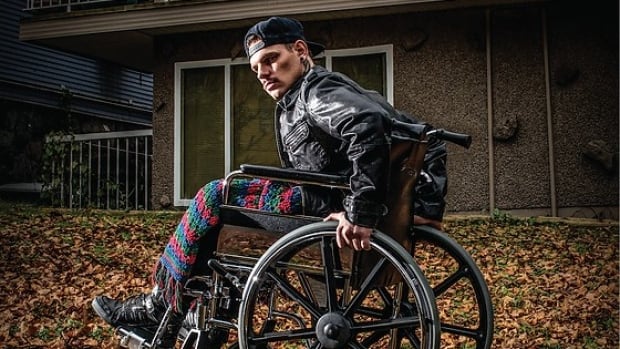 An image from a 2015 anti-gang awareness campaign by police in British Columbia is now drawing criticism over its use in a campaign in Saskatchewan.

On Monday, the Saskatoon Police Service officially launched its Drop Gangs initiative, which provides education and resources about the reality of gang life.

By Thursday, people on social media were calling attention to an image on the Drop Gangs website showing a man in a wheelchair with the text, “You wanna roll like a gangster?”

The word “roll” is emphasized in yellow, to highlight a play on “rolling with,” or being involved with a gang, and rolling in a wheelchair.

The image was posted by Saskatoon police but not created by the police service.

“I think it really communicates something really damaging for people with disabilities, and people who use wheelchairs as a primary mode of transportation,” said Dale Wilson, who is finishing her masters of disability studies at the University of Manitoba.

She criticized the use of the image in a tweet on Friday.

@SaskatoonPolice this is awful. Using disability to make some point about gang membership is disgustingly ableist. Disability is not some awful reality. How embarrassing to have a municipal organization pushing such ableist rhetoric. #YXE @charlieclarkyxe https://t.co/DYcBR5IpKT

“It was just problematic in the way that it comes across as like, ‘Oh, if you stay in the gang, you’re going to end up in a wheelchair,’ and that would be a terrible thing,” she said.

“The reality is, if you live long enough in this world, you will develop a disability. And then the realities of ableism become very prevalent to you,” said Wilson, referring to discrimination and social prejudice against people with disabilities and people who are perceived to be disabled.

Wilson added that even though the material was not originally produced by Saskatoon police, and has since been removed from its Drop Gangs website, it was concerning the image was posted in the first place.

“I think the lesson is, you know, look at your sources and examine how might someone in the community see this image.”

Kayleigh Kazakoff was also among those who tweeted about the image, which she first spotted on a Reddit thread.

In a direct message to CBC News, she also called the ableist message, while acknowledging the intent was to show “the life-altering possible effects of gang life.”

“I can’t speak to the efficacy of the rest of their campaign, but this message in particular was hard to see,” said Kazakoff, who lives with chronic illness and intermittently uses a cane.

Image from 2015 BC awareness campaign

In an email, Brad Jennings, a spokesperson for the Saskatoon Police Service, said the service offered an apology to those who brought forward their concerns.

The service also shared a statement on Twitter, thanking people who complained “for sharing the impact this image has had.”

“While the material was not produced by SPS/Drop Gangs, we recognize how it caused harm,” the Twitter statement said. “We look to do better in the future.”

As of April 1, the video is posted on both the enforcement unit’s website and on YouTube, with more than 9,300 views.

The video caption describes the initiative as a “comprehensive gang education, prevention, and awareness campaign that uses bold, emotional, and visually impactful images and message.”

Another description on the End Gang Life website states that the stories told are “vivid and enrapturing,” and “are universal and can be shown to anyone in any community and still have an impact.”

The BC special enforcement unit has not responded to a CBC News request for comment.

Jennings noted there is currently no ad campaign for the Drop Gangs initiative.

In a news release Monday, the Saskatoon Police Service said the program provides education and awareness around outlaw motorcycle and street gangs in Saskatoon.

Saskatoon police “have seen other programs, particularly in British Columbia, that have been very successful and are fortunate to be able to partner with them to share information and resources,” said Patrick Nogier, superintendent of the Saskatoon police criminal investigations division, in the release.

Along with the website, the Drop Gangs initiative features a marked vehicle that “functions like a rolling billboard.”

Saskatoon police said the program and vehicle have been paid for with proceeds seized from criminals.

The service plans to have the vehicle out at community events, outlaw motorcycle gang events, and by request for educational presentations. It will also be present at warrant executions where gangs, drugs, and organized crime are involved, Saskatoon police say.