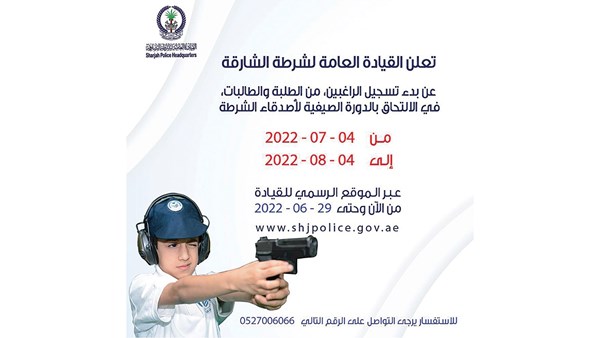 The Sharjah Police General Command announced the opening of registration for students who wish to join the “Friends of Police” summer program at the thirty-fifth session, organized by the Department of Media and Public Relations in cooperation with the Academy. of Police Sciences and the Sharjah Self-Defense Sports Club in Sharjah city and the central and eastern regions, next July will last for one month.
Lieutenant Colonel Mohammed Saeed Al Dhahouri, Head of Public Relations Department of Sharjah Police, stated his enthusiasm to continue his summer program every year, in order to enhance the important role of police and security authorities in the construction of cultural and security values ​​for children and young people, to build a conscious generation that assumes the consequences of the future through the acquisition of experiences, that builds their capacities, strengthens their forearms, enhances the values ​​of loyalty to their homeland, the defend and protect your security and stability .
He added that the conditions for enrollment in the course were determined that the ages of the participants range between 10 and 16 years, and that the participant be medically fit, noting that the course schedule ranges between 3 and 4 hours a day, except for the weekend, and students can register via a link The e-submission is available on the Sharjah Police Instagram page, or via their website.