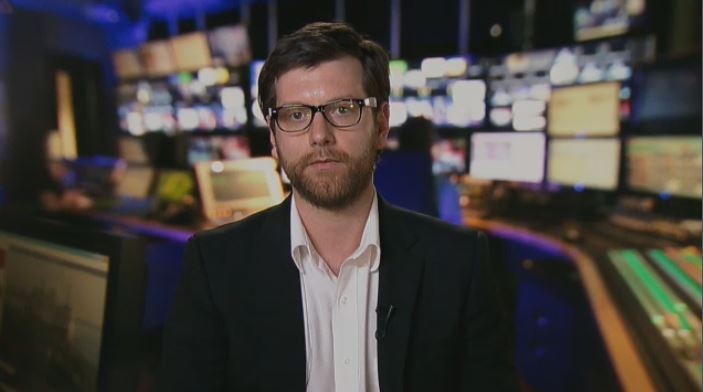 Quebec’s Green Party leader posted a series of controversial Tweets Friday and Saturday calling on Western countries and the Ukranian government to accept certain Russian demands related to the ongoing conflict with Ukraine.

Alex Tyrrell said Russian President Vladimir Putin’s demands for the denuclearization, “demilitarization” and “denazification” of Ukraine are “reasonable,” calling on Western governments to stop sending weapons to the country and opt for negotiations instead.

I therefore call on the Canadian, American and NATO governments to stop sending arms to Ukraine and to support serious negotiations with Russia now to allow for an immediate de-escalation and to save lives.

“I therefore call on the Canadian, American and NATO governments to stop sending arms to Ukraine and to support serious negotiations with Russia now to allow for an immediate de-escalation and to save lives,” he wrote on Twitter Friday afternoon.

Tyrrell’s tweets were met with swift criticism, with Member of the National Assembly Benoit Charette suggesting he apologize to Ukrainian and Jewish communities for his statements.

“The only thing to do in the circumstances is to recognize it and apologize, especially to Ukrainians and Jews here and elsewhere,” he wrote.

THE ‘DE-NAZIFICATION’ OF UKRAINE

Putin has cited the “denazification” of Ukraine as one justification for the invasion.

In a statement to CTV News, Tyrrell referred to the Azov battalion, a nationalist, far-right voluntary military unit that was incorporated into the Ukrane National Guard in 2014.

“This is a major problem,” he said.

Political scientists like Ivan Katchanovski point out that Ukraine has a Jewish president, Volodymyr Zelensky, who won the election with over 70 per cent of the vote.

Katchanovski told The Canadian Press that Zelensky and his government “are not Nazis or neo-Nazis.”

Good news! Let’s hope that peace talks progress during this period and that this war can be brought to an end. https://t.co/TeMVIcsPDS

The link in question was an article covering a temporary ceasefire that would allow citizens to evacuate cities under attack. That cease fire failed shortly after it was declared.

Tyrrell said that regardless of the information’s origins, the contents of the article “were factual.”

“It should not be a thought crime to read Russian media in order to better understand the opposing point of view,” he said.

In a statement sent to iHeartRadio host Dave Kaufman, the Green Party of Canada distanced itself from Tyrrell’s statements, saying the federal Green Party is distinct from the Quebec party and said Tyrrell’s remarks are not reflective of the federal party’s views.

“Alex Tyrrell holds no official position with the Green Party of Canada and does not speak for GPC,” spokesperson John Chenery wrote. “His views of him on the war in Ukraine are abhorrent. Russia is the aggressor.”

When asked about this statement, Tyrrell said pacifism is a “core value” of the party and referenced interim party leader Amita Kuttner’s own opposition to sending weapons to Ukraine.

“I support their position on this,” he said.

The Quebec Green Party won 1.68 per cent of votes in the 2018 provincial election.

Tyrrell took to Twitter again Saturday morning, stressing that he was “speaking out for peace” to avoid further violence in Ukraine.

“To be clear; I condemn the Russian invasion and violence on both sides of this conflict. I am a pacifist who is against war,” he wrote, adding that “if we want peace, we need to negotiate and both sides need to compromise.”

If we want peace, we need to negotiate and both sides need to compromise. That is the position I am advocating for. We will not achieve peace if escalation continues.