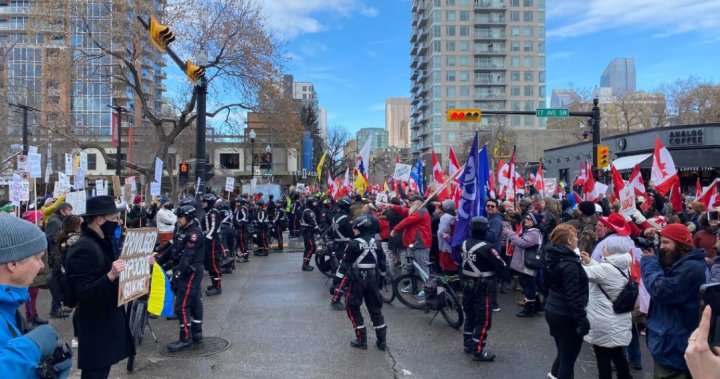 Frustrated Beltline residents and those continuing to protest government COVID-19 health measures came face to face at a downtown intersection on Saturday.

In a tense scene, close to 50 counter-protesters stood across 17 Avenue SW as the protest, dubbed the Calgary Freedom Rally, marched toward them and forced Calgary police officers to separate the two groups.

Nearly every Saturday, thousands of protesters are drawn to Central Memorial Park in the city’s downtown to rally against COVID-19 health measures. The demonstration is followed by a march that snakes through the streets of the area.]

Police said one person was arrested after shoving a counter-protester, but no charges have been laid. It is unclear if the person arrested was associated with the rally.

People who live in the Beltline neighborhood have been raising concerns about the rally, including noise and disruptions to local businesses and traffic in the area. Some of those people have begun to gather in recent weeks to oppose the rallies.

“A lot of people are getting sick of the constant noise and harassment,” Community Solidarity YYC spokesperson Hunter Yaworski told Global News.

“Ultimately, we don’t want this convoy going down 17 Avenue every Saturday… So far, police haven’t been able to do that for us so we’re trying to do it ourselves.”

Officers on scene diverted the rally down a side street and the exchange between the protests lasted close to 20 minutes.

Last week, most COVID-19 health measures in Alberta were lifted, including most mask mandates, indoor and outdoor social gathering limits, the work-from-home order and capacity limits at large venues. The province’s proof-of-vaccination program was also ended last month as part of the province’s three step plan to ease restrictions.

But in a statement to Global News, rally organizers said the protests will continue for several reasons.

“The most important being that many of us have lost complete confidence and trust in Jason Kenney and his UCP government, who could easily bring restrictions back at any time,” spokesperson Jake Eskesen said in a statement.

“Federal travel restrictions still apply to unvaccinated individuals, as does the cross border trucking mandate. These protests oppose federal mandates in addition to the provincial ones.”

According to Eskesen, protesters have several demands, including the resignation of Premier Jason Kenney and an investigation into the provincial COVID-19 response.

They also want the “immediate release” of Pastor Artur Pawloski and Tamara Lich. Pawlowski remains in custody in Alberta over charges related to the Coutts border blockade, while Lich was denied bail in Ontario for her role in organizing the so-called “Freedom Convoy” in Ottawa.

Eskesen said the protesters are also calling for compensation “for those unjustly laid off or put on temporary leave” due to mandatory vaccination requirements, as well as constitutional reform to prevent “similar government overreach.”

The ongoing protests will be the topic of a closed-door briefing between city council and Calgary police on Tuesday in an effort to determine next steps in response to complaints from residents and businesses in the area.

Last week, council voted in favor of holding regular briefings with the Calgary Police Commission and Calgary Police Service about the protests in the Beltline.

Ward 8 Coun. Courtney Walcott said on Monday that while council doesn’t have the ability to direct local police, the briefings will help councilors communicate efforts at the protests to the general public.

“This is about starting an open relationship with all of the different branches that are involved in this, so that we can help educate and inform people and help them understand that we’re not just turning a blind eye,” Walcott told reporters on Monday .

Organizers of the rally told Global News they have been in regular contact with police to “ensure the safety of all parties involved” and that they have no concerns about enforcement because protesters are “acting lawfully”.

“We want to stand in solidarity with the communities here,” Yaworski told Global News.