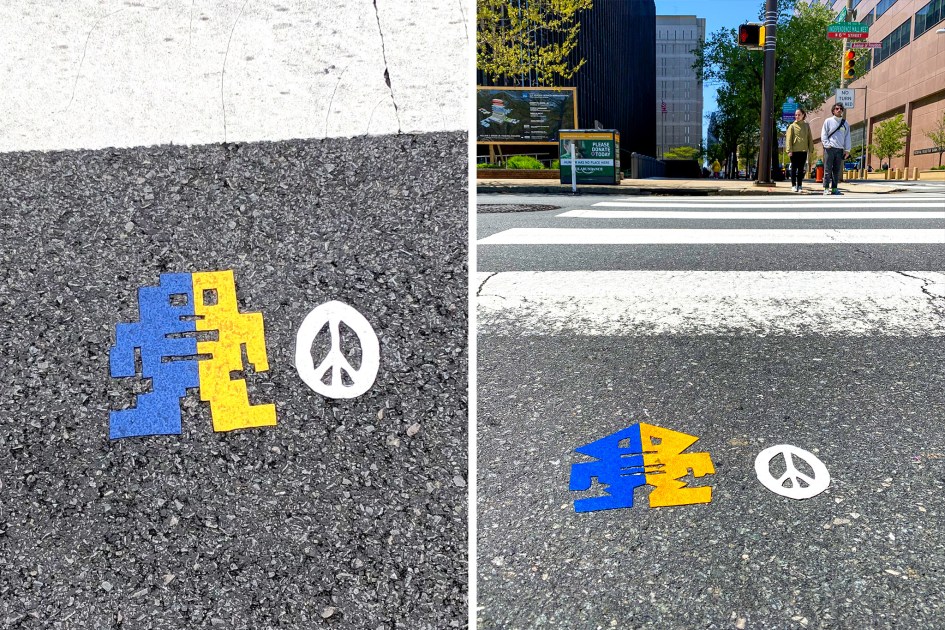 You generally don’t look at your feet to find street art. But for the past month, people have been looking down Center City crosswalks and finding something cool: little blue and yellow humanoid figures next to peace symbols.

The artwork appears to be in the style of the stikman, a figure that has been published in Philadelphia and other cities by an anonymous local artist, though no one has stepped forward to officially claim responsibility.

The new figure and symbol appear embedded in the asphalt in the middle of pedestrian crossings, street art, so to speak. It is not entirely clear how the artist was able to navigate the traffic during the installation.

In each case, the robot-like character wears the colors of the Ukrainian flag, which has become a common symbol of support for the Ukrainian people since the Russian invasion in February.

You may have seen Stikman in Philly before, and no, that’s not an artist’s name. He is a robot-like figure who has been displayed for decades on telephone poles, street signs, crosswalks and other public surfaces, familiar to some observant passers-by but often unnoticed by others.

The little squares can be made of things like wood, metal, or plastic adhered to surfaces, or some kind of tile embedded in asphalt.

The creator has previously spoken to art blogs and the press, but at all times, managed to keep his name hidden.

The anonymous artist, who lives in Philadelphia, installed his first piece in New York City’s East Village 30 years ago. The design was inspired by a plaster cast of a flea market from the late 1980s, with the impression of a man made of sticks.

Since then, the Stikman has appeared across the continent, mostly installed by the original artist, they told the Streets Dept blog in 2020, and “far less than 1%” installed by other people commissioned with the work.

The character has appeared in places like DC, Denver, Indianapolis, St. Paul, Nashville and Toronto, according to news reports, online commentary and a 16-year-old Flickr group that is still active.

And there are plenty in the artist’s hometown. Philadelphia, the artist told Streets Dept, is where they sleep, work and were born. “It’s in my blood,” they said.

The artist’s work has also appeared in galleries in New York and Philadelphia.

Some have compared or conflated the work embedded in asphalt with that of Toynbee Tiler, another elusive Philadelphia-based guerrilla artist who began laying linoleum tiles on streets in the early 1980s and may have been active in 2016. Toynbee Tiles: Found in cities around the world, they usually have some version of the cryptic text, “Toynbee’s idea: Kubrick’s 2001, raise the dead on the planet Jupiter.”

But Stikman is different and “has little in common” with Toynbee Tiles, the stikman artist told WHY: “Each has a very different aesthetic and composition, though some may say they share a sense of the power of mystery.”

Where can I see the artwork?

Recent street art (we’re using this term) has been documented by Instagram users on various streets in Philly over the past four weeks or so. They have also appeared in New York.

People have seen them at crosswalks in some places in the Old City, on Broad Street in Center City, and around Ben Franklin Parkway.

Each design is unique, but they are all a variation of a stikman-like character in the colors of the Ukrainian flag, along with a white peace symbol.

If you have any more Philadelphia sightings to add to this list, please let us know.