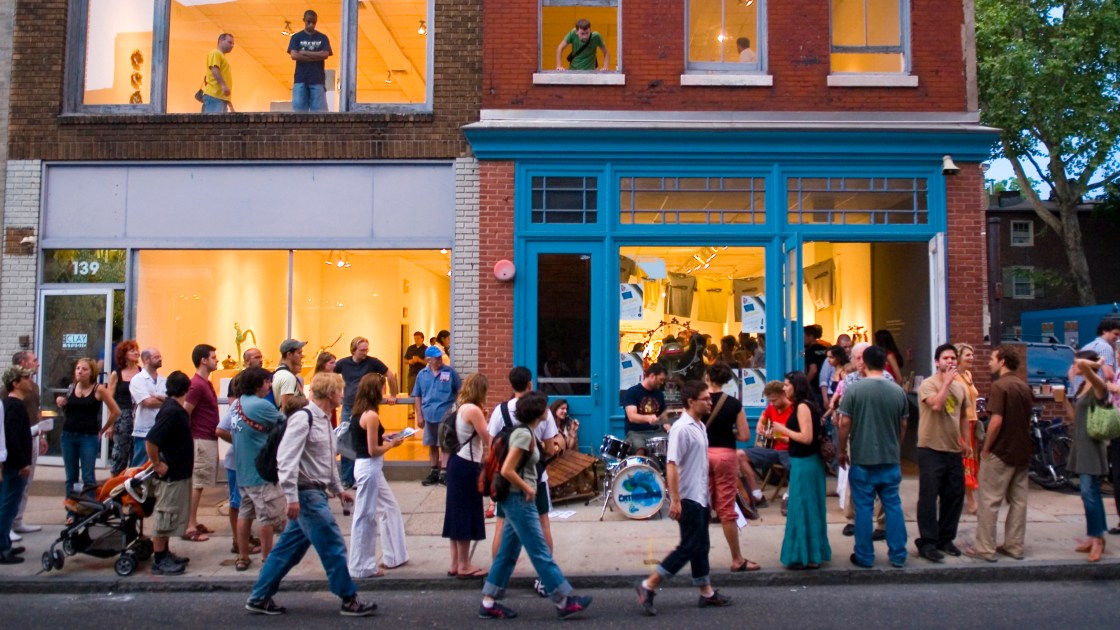 The first essay I published was about Philly’s First First Friday, a monthly arts event that celebrates its 30th anniversary this week.

In many ways, it was a new beginning for the city and for me. First Fridays in the Old City helped bring a sense of community and growth to the city’s now much more dispersed arts and culture scene.

The winter of 1994 was frigid. I was a senior studying English at Temple University, and had recently ventured out of my parents’ home to share a trinity in South Philly. He had a job at the Temple Institute for Disabilities, but continued to commute to Northeast Philadelphia to do weekend shifts at a popular corner store called Joe’s Deli, where he had worked in high school.

During that cold winter and hectic time of my life, the experience of one night browsing galleries and meeting other creative people was amazing.

I decided I had to write about it, specifically for The Inquirer’s Sunday magazine, which was a full color print product. The “Upfront” section of the magazine featured occasional first-person essays, which I always looked forward to reading. I had made a study of my favorites, drawing diagrams and taking notes with a view to presenting my own one day.

I don’t remember any of those items now, but I do remember being shocked by the voices in them. I could listen to flinty, funny, sad, weird, sweet, sometimes all in one rehearsal!

I remember writing my first Friday article and mailing it to The Inquirer with a self-addressed, stamped envelope. Very soon, a few weeks later, I received an answer.

The acceptance letter was basic: “Thank you for submitting your essay, we would like to publish it.”

One sentence, that was all.

I almost didn’t believe it. I told my mom and dad, and some people I worked with at Temple. They were all excited for me. “Congratulations, you were blindly posted over the transom,” said my friend Larry Pace. (I found out later that it’s a phrase used when posting an unsolicited article.)

The day the article came out, I was working my shift at Joe’s. There were five stacks of the Sunday paper in the deli, but I didn’t tell anyone.

It hit harder when Joe himself stopped by the store that day. It was a Sunday, his day off, but I remember we talked, because when it came time to tell him about my article, my mind and body were spinning.

To paint the picture, Joe’s default setting was to yell. For example, if you were making an Italian hoagie too slowly or too carefully, he would slap you on the back of the head and yell, “Come on, Picasso! What the hell are you doing? You are not painting the Sistine Chapel; you’re making a sandwich. Everyone loved Joe and he loved us, but he could explode for any reason or no reason at all.

A part of me wanted to tell everyone that day, but I felt like they would laugh or make fun of me. I chickened out. It is a known story. Now that he had gone to college, I thought I was better than the others? Of course not. I felt strongly that it was a good idea not to talk about it.

In two more years, he would leave Philadelphia to start a creative writing program at Brooklyn College. It would take me years to process and deal with such feelings.

I see now that writing the piece and going out on First Fridays were the beginning of lines to another life.

It’s a story shared by a few others who were hanging around the Old City. The events not only made the city more vibrant, they brought people together. He made a new friend, Ted Casterline, who went to the Tyler School of Art. He was part of the collective gallery Vox Populi, where he would end up spending a lot of time. And we’ve been friends ever since.

I never liked the title the newspaper gave my essay: “I Like to Watch.” My own title for the piece was “Gallery Going.”

Rereading it now (what can you do here), I still don’t quite believe it, but I appreciate it too. I am grateful that a part of my new beginnings coincided with a part of the city discovering itself, a part that continues to thrive.