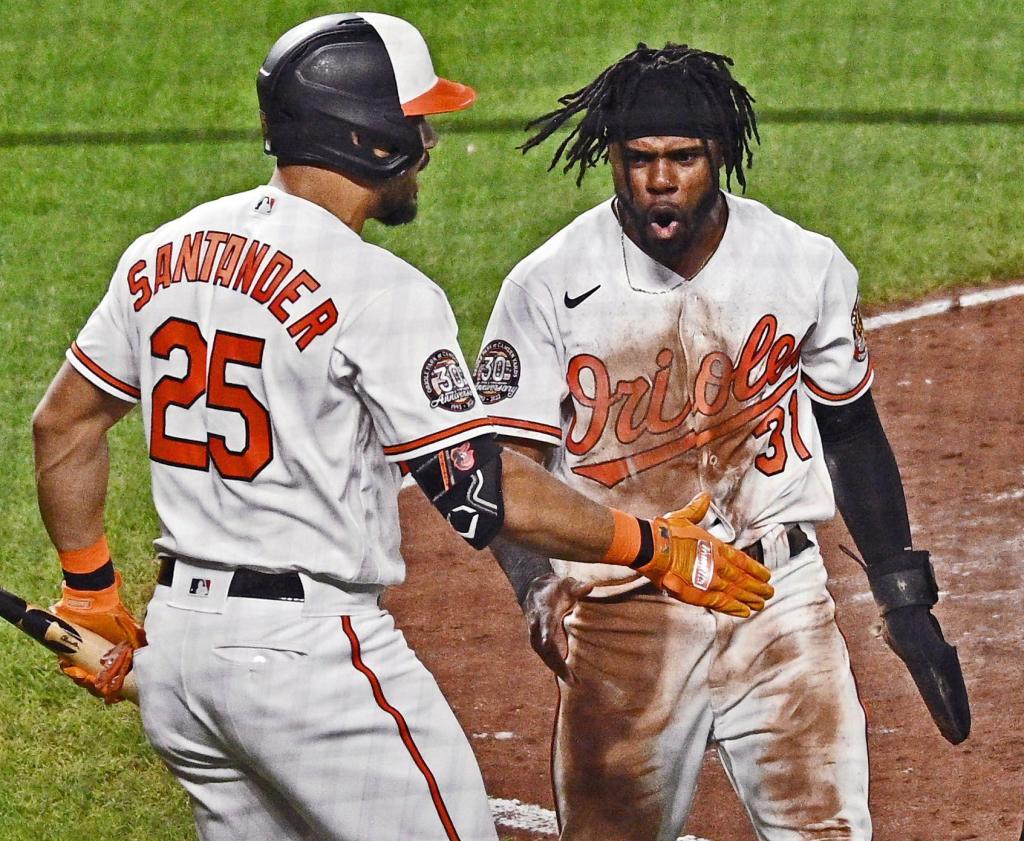 At home plate Monday night, Luke Raley’s right leg met Adley Rutschman’s and, for a moment, hopes of a bright future for the Orioles were dashed along with their young catcher.

But seconds later, as quickly as he spun to the ground, Rutschman spun to his feet. Such is the resilience of these Orioles, they made that game a footnote in a 5-1 win to open a four-game series with the Tampa Bay Rays at Camden Yards.

The win returned Baltimore to .500, guaranteed a second straight winning month after spending nearly five years with each other and marked their 48th win of the season, surpassing the 2018 team total that sparked the organization’s rebuild at 66 games. less.

That 115-loss campaign gave the Orioles the first overall pick in next summer’s draft, spent on a player in Rutschman who immediately became the face of the draft. Since Rutschman came to the majors, the Orioles have been a more successful team, going 32-24. His first two full months in the majors have seen the Orioles post winning records. It represents his first such streak since May and June 2016, his most recent playoff season.

A comeback by Tampa Bay’s Brett Phillips briefly looked as if it might derail that, with the bases-loaded groundout forcing a play at the plate. Although Orioles starter Austin Voth beat Raley to the plate, it didn’t come in time for Rutschman to get out of the way of his slide, with Raley clipping Rutschman and sending him to the ground. He was up without a hitch moments later, only after 9,606 the fans in attendance and many more at home collectively held their breath.

“I have seen difficult collisions; To me, that wasn’t a tough collision, but it was an awkward one, and when it’s awkward, that definitely scares you,” Orioles manager Brandon Hyde said. “But once Adley showed up, I didn’t think anything of it. To me, that was a clean play, honestly. We’re so used in this game now to not seeing contact that when you see a little bit of contact, everybody wonders if it was fair play or not. But I thought it was definitely a clean play, and the guy was going hard toward the corner of the plate. Those plays happen.”

Little else came of the incident the rest of the night, with the exception of the boos that rained down on Raley, the Rays’ designated hitter, in each of his next at-bats. His description of his play matched Hyde’s, saying that Rutschman understood no ill intent was involved and tried to help calm the crowd. Rutschman said he didn’t have a clear view of the play as it was happening behind him, and his focus was “making sure my foot was on the base and that we got the first out.”

“He liked a little twist, almost like he sprained his ankle, but it seemed like it wasn’t as bad as it seemed,” Voth said. “But I think it was just a tough play. The guy would go in and slip and maybe just hurt his leg a little bit.”

Half an inning later, the Orioles loaded the bases with no outs and got on the board on a sacrifice fly by Rougned Odor. Maryland product Brandon Lowe responded in the top of the third with a home run off Voth.

With Voth working on a limited pitch count, that was his last inning, giving way to a bullpen that emerged unscathed for the final six innings. After a scoreless fourth by Bryan Baker, Nick Vespi, called up from Triple-A Norfolk earlier in the day with Rico Garcia an option, struck out four in 1 2/3 innings. Dillon Tate and Felix Bautista each recorded three straight outs with a strikeout around 1 1/3 innings from Cionel Perez.

Baltimore’s bullpen ERA fell to 3.09 after the group entered Monday with the fourth-lowest mark in the majors.

“I think it’s just a tribute to the guys, their character, their work ethic,” Rutschman said. “They show up every day and they come to the mound with a purpose. I am very lucky. It’s a lot of fun to be able to catch those guys.”

That work allowed Baltimore to capitalize on another scoring opportunity in the fifth. After a pitch grazed Rutschman to load the bases, Ryan Mountcastle singled to center field, and Cedric Mullins fired home to give Mountcastle a second RBI on the hit. Anthony Santander followed with a groundout to first, but Ji-Man Choi’s throw to second hit a running Mountcastle, sending the ball into left field as Rutschman scored and both runners advanced. Austin Hays drove in Mountcastle with a line drive to left that served as a sacrifice fly.

The Orioles announced Sunday that their entire 40-man roster has been vaccinated against COVID-19. Previously, the team had to place outfielder Anthony Santander and relief pitcher Keegan Akin on the restricted list when he went to Canada, where unvaccinated players are barred, to play the Toronto Blue Jays. Players placed on the restricted list do not receive pay or service time for lost games.

Hyde said he wasn’t sure if the Orioles’ competitive improvement since their previous trip to Toronto prompted any change of heart among unvaccinated players. The club next visits the Blue Jays from August 15-17.

“That’s a personal choice for them,” Hyde said before the game. “I didn’t talk to them about where we are in qualifying or anything like that. That was something we had talked about in the past, but I was happy to hear that, and like I said, that’s a choice of those two guys. I am proud of our club for being fully vaccinated.”

>> First baseman/DH Trey Mancini was left out of Monday’s lineup because Hyde felt he “has been pushing a little bit lately.” Mancini is hitless in his previous 22 at-bats.

>> Shortstop Jonathan Araúz, playing for the first time since July 8, left the game in the eighth inning with a jammed finger on his right hand after being picked off at second base trying to extend a base hit off the outfield wall right into a double. Hyde said it’s day to day.