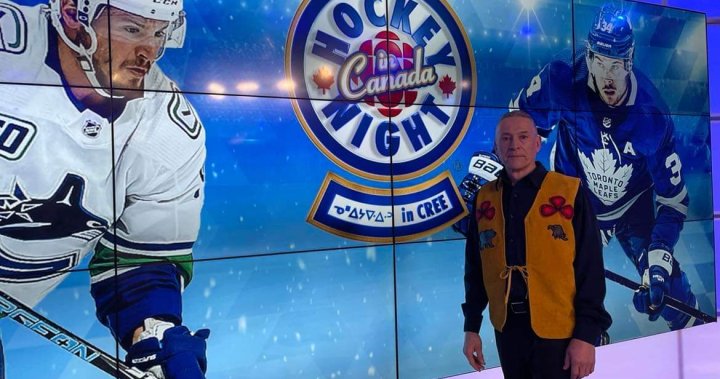 Clarence Iron from Canoe Lake, Sask. is broadcasting the NHL in Cree.

“People are excited (that) their Cree language is being promoted across Canada,” Iron said.

‘It could open doors to future generations’: First ever NHL Cree broadcast

Sportsnet and the Aboriginal Peoples Television Network (APTN) have teamed up to deliver Hockey Night in Canada in Cree when the Vancouver Canucks plays against the Toronto Maple Leafs on Saturday night. More games will follow.

Iron is usually a broadcaster at CFNK-FM in Pinehouse Lake, Sask. He will be joined by Jason Chamakese and Earl Wood during the broadcast.

Iron said it’s exciting that so many people are taking an interest in preserving the Cree language through initiatives such as Hockey Night in Canada in Cree.

“There’s a lot of Elders that are excited to hear a hockey game in our language,” he said. “People waiting across Canada waiting for this kind of hockey. It gets (us) motivated and excited, including myself.”

The next few NHL games where Iron, Chamakese and Wood will be broadcasting in Cree will take place on March 26, April 9 and April 23.

1:41
NHL game to be broadcast live in Cree from Winnipeg