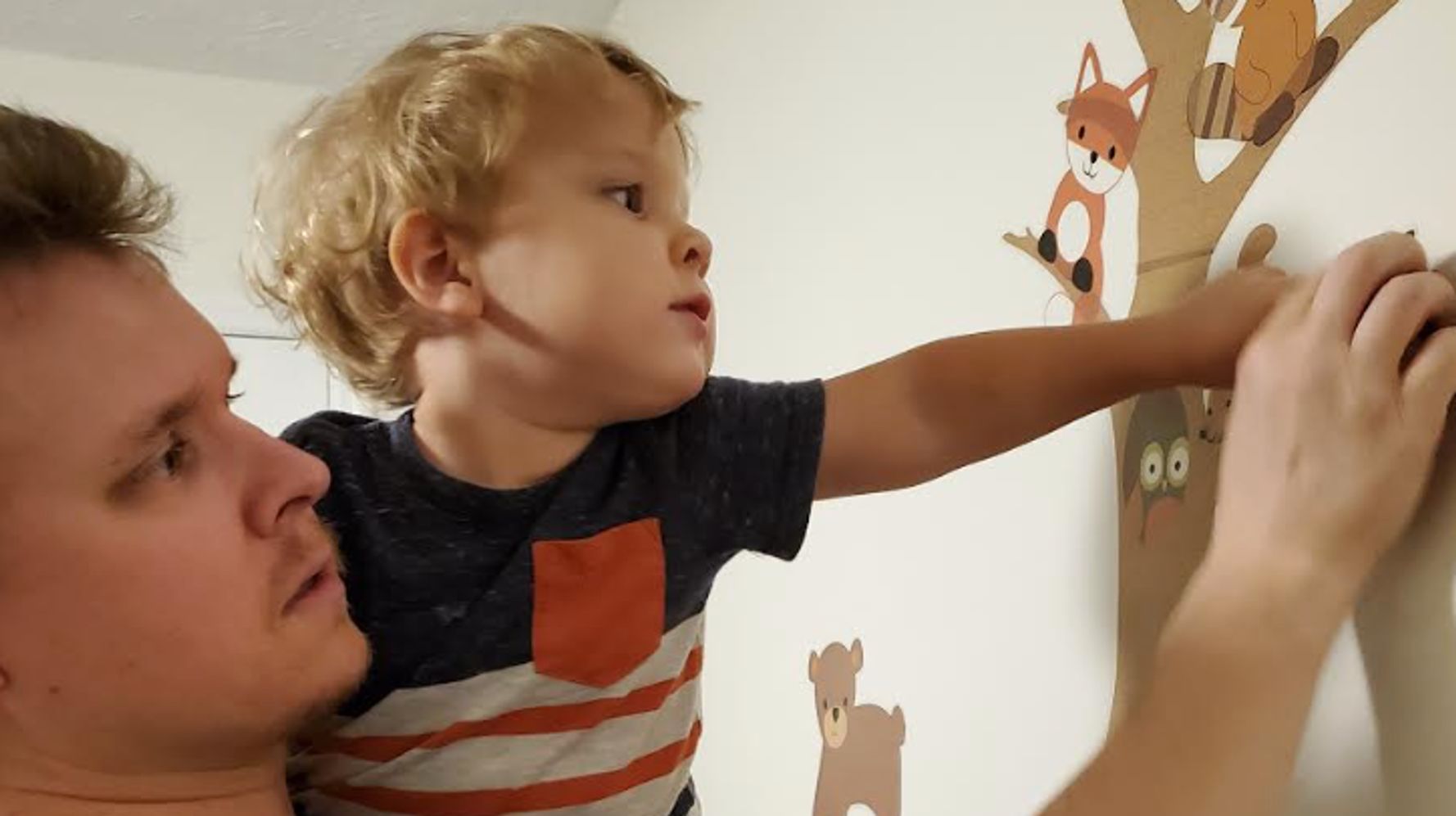 At the beginning of 2017, my husband and I sat down in the OB-GYN office to confirm that we were pregnant with our first child. The room was filled with literature for new moms on childbirth and breastfeeding classes, hospital tours and registration, and handouts on how to recognize postpartum depression. As we waited for our ultrasound, my husband pointed out the lack of resources for men transitioning to life as new dads.

Even before we got pregnant, we had experienced how infrequently dads and dads-to-be are welcome in conversations about fatherhood.

Before conception, blood tests showed that my anti-müllerian hormone was too low for a 26-year-old woman like me: my ovarian reserve was depleted and trying to conceive without drugs or IVF could be difficult. With the referral in hand, I sat down to discuss the next steps with a reproductive endocrinologist.

“My husband couldn’t keep this appointment because he’s on his way to work,” I told the doctor. “Can we call him? He wants to understand what is going on.” He was already stressed and overwhelmed sitting in the beige office. When my answer was met with bewilderment, my stomach tightened.

Surprised, the doctor repeated: “Do you want to call your husband?” She was frustrated – she wanted to include my husband because we were trying to start a family and she wanted people to start treating him like he mattered.

As we move away from the restrictions and clichés of heteronormative relationships in society, men like my husband also deserve more support as they become new fathers.

My husband kept all the appointments during the first and second trimesters. During one visit, a nurse told her, “You really don’t have to keep coming to these appointments.” He could feel his mood changing and see the mix of emotions on his face: frustration, pain, resignation. His role as a new father had already been defined even before the baby was born: it was his “job” for him to work and take care of our family financially. My role as a new mother was to carry our child and endure the emotional toil of pregnancy.

I was so upset about being stereotyped by strangers. I intended to work full time and maintain an equitable society while raising our son with my husband because we are a family. We wanted people to understand that he wanted much more than just bringing money home: he wanted to be an active participant in our son’s life, whether it was doctor’s appointments, diaper changes, nighttime feedings or visits. to nurseries.

Professor Claire Hughes and her research team at the University of Cambridge found that if new parents had postnatal relationship problems, the children were more likely to be worried, unhappy or tearful, easily startled or clingy in new situations. As a result of the University of Cambridge study published in August 2019, researchers determined that support and resources should be extended to new dads and focused on the well-being of both parents.

“For too long, the experiences of new fathers have been pushed aside or treated in isolation from those of mothers,” Hughes said. “This needs to change because difficulties in children’s early relationships with mothers and fathers can have long-term effects.”

While I was there in labor four days before our scheduled C-section, the Labor & Triage nurse explained to my husband that after some medication and a saline drip, they were able to slow down, but not stop, my contractions and they were giving me sending home.

“We’re not leaving this hospital,” I remember my husband saying just as another contraction hit me like a wave. The Labor & Triage nurse seemed surprised by my husband’s assertive tone as she explained why we had planned our C-section due to an organic spinal fusion in my lower back.

“I talked to the doctor on duty,” the nurse said when she returned to the room. She’s finishing up her patients and then she’s going downstairs. We will start preparing you for surgery and the anesthesiologist will come to go over everything with you.” My husband and I were a team: we were going to have our son together and he was an active part of everything that was involved.

In the first few months after giving birth, my husband and I would take our son for check-ups with the pediatrician. I was asked to complete a checklist for the doctor about my physical and mental well-being. These types of forms help doctors determine if new moms are experiencing postpartum depression and/or anxiety. The US Preventive Services Task Force recommends that all women be screened for depression before and after giving birth. Currently, there is no screening for PPD in new fathers.

In 2019, the University of Nevada, Las Vegas published a study in the Journal of Family Issues. The researchers, led by Marriage and Family Therapy professor Brandon Eddy, explored problems experienced by new dads, such as postpartum depression. About 4% to 25% of new dads experience PPD according to the National Institutes of Health, but there are no common diagnostic criteria for paternal PPD. It’s well known that new moms experience hormonal fluctuations during their first six months, but dads can too. Studies show that dads can experience drops in testosterone and cortisol while increases in oxytocin, estrogen, and prolactin. A new father is also more at risk if his partner is experiencing PPD.

“Half of all men whose partners have postpartum depression are also depressed,” said Will Courtenay, Ph.D., licensed clinical social worker and founder of PostpartumMen.com. “Depression in both parents can have devastating consequences for their relationship and especially for their children.”

The UNLV research team reported that new dads surveyed lacked the necessary resources to help recognize postpartum depression, repressed their feelings, felt overwhelmed or resentful of the baby, and felt abandoned by their wives, medical professionals, and the society.

And nowhere was this manifested more than in public restrooms. We were having dinner as a family when our oldest son was only a few months old and it was obvious that he needed a diaper change. My husband offered to drive it so I could enjoy my hot meal. Shortly after leaving, my husband snorted with our baby and complained about the lack of changing tables in the bathroom. He ended up having to change our son in the trunk of our car.

My husband is not alone: ​​Donte Palmer, a father from Jacksonville, Florida, posted a picture of himself squatting against a bathroom wall to change her 1-year-old son onto her lap in 2018. Her photo went viral with the hashtag #SquatForChange. Palmer’s photo brought to light the lack of support for families, and as a result, Pampers has committed to installing 5,000 changing tables in men’s restrooms by 2021.

We welcomed our second child in February 2021. After we were discharged from the hospital, we received resources from the American Academy of Pediatrics on how new dads can care for mom and baby, but no advice on personal care for dads. It has been four years since my husband became a father and nothing has changed.

Dear society, it’s 2022 and now is the time to make postpartum support more inclusive and give parents the tools they need to communicate. Let’s stop passing on the ideology that a man should take care of his family financially while the wife stays at home. My husband and I both work full time, care for our son full time, and maintain our home equally.

“Dads don’t matter, our only job is to earn money to support the family. That’s how people in society see dads,” says my husband. My husband was there every step of the way, from choosing car seats to decorating the nursery, doctor’s appointments and childbirth classes, helping me carry the emotional toll of our pregnancies.

We both understand that society is always going to criticize our role as parents, both individually and collectively. As our children grow, we will tell them about our experience from pregnancy onwards. We want them to live their best lives, without preconceived notions of outsiders or limited narratives. My husband and I hope that one day our children can break the barriers of gender equality and write their own narrative. Who knows? They could make a statement like Donte Palmer and really make a difference.

Gillan Ritchie is a full-time mom, full-time Senior Digital Marketing Coordinator, and freelance social media and content producer. Her writing has appeared in The Free Lance-Star, Richmond-Times Dispatch, The Times, Richmond Magazine, and HOME Magazine. You can find her work at gillanritchie.com.

Do you have a compelling personal story you’d like to see published on HuffPost? Find out what we’re looking for here and send us a pitch.