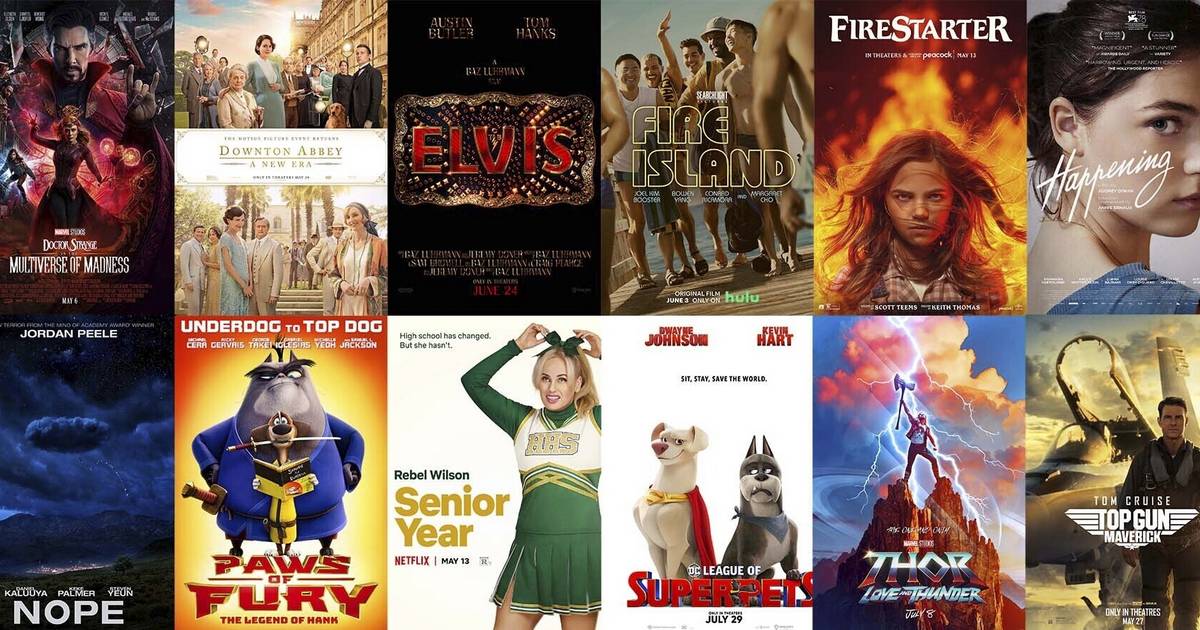 This summer in the movies, Tom Cruise returns to the cockpit behind those iconic aviators. Doctors Grant, Sattler and Ian Malcolm return for another round with the dinosaurs. Natalie Portman is picking up Thor’s hammer. And Jordan Peele is ready to terrify us with the unknown. Again.

Hollywood is bringing out some of its biggest and most trusted players for the 2022 summer movie season, which kicks off unofficially this weekend with the help of Marvel and Disney’s “Doctor Strange and the Multiverse of Madness” and runs until end of August. Studios and exhibitors are still making up for losses suffered during the pandemic, adjusting to new ways of doing business including shorter release windows, competition from streaming and the need to power their own services, and wondering if theater will ever return to the pre-pandemic situation. levels

Although the pandemic persists, there is optimism in the air.

“We’re still waiting for the bigger audiences to come back,” said Jim Orr, head of national distribution for Universal Pictures. “But it really feels like we’ve turned a corner.”

Last week, studio executives and movie stars chatted with theater owners and exhibitors at a convention in Las Vegas, promoting movies that they promise will keep audiences coming back to theaters week after week.

Expectations are particularly high for “Top Gun: Maverick,” which Paramount Pictures will release on May 27 after two years of delays due to the pandemic. Producer Jerry Bruckheimer says he never gave up on wanting to release “Top Gun: Maverick,” a high-speed action movie made with lots of aerial photography and practical effects, exclusively in theaters.

“It’s the kind of movie that encompasses the movie-going experience,” Bruckheimer said.

Before the pandemic, the summer movie season could reliably produce more than $4 billion in ticket sales, or about 40% of the year’s gross receipts according to Comscore. In 2020, that total plummeted to $176 million. Last year it made something of a comeback with $1.7 billion, but things were barely back to normal: many opted to delay launches further or employ hybrid day-and-date strategies.

This summer, although some slates are thinner than usual, everyone is refocusing on theater. Ticketing service Fandango recently surveyed more than 6,000 ticket buyers and 83% said they planned to see three or more movies on the big screen this summer. Netflix last month also reported its first subscriber loss in 10 years and expects to lose two million more this quarter.

Adam Aron, president and CEO of AMC Theatres, the nation’s largest theater chain, is particularly excited about the steady stream of blockbusters coming to his theaters. He promoted franchises like “Doctor Strange 2”, “Top Gun 2”, “Jurassic World: Dominion” (June 10) and “Thor: Love and Thunder” (July 8), “new cinematic concepts” like “Nope” by Jordan Peele. ” (July 22) and “Elvis” (June 24) and family deals from “Lightyear” (June 17) to “Minions: The Rise of Gru” (July 1).

And it looks like summer is going to start off with a bang: Analysts are predicting “Doctor Strange 2” could open with $170 million this weekend, twice as much as the first film. Marvel and Disney then follow that up with the new Thor, which continues Hemsworth’s character after “Endgame” and wonders “what now?”

“It’s a really cool, really funny, weird little group of heroes,” said director Taika Waititi. “And, IMHO, we have probably the best villain Marvel has ever had in Christian Bale.”

But superhero movies alone don’t create a healthy movie landscape. Universal prides itself on its diverse summer lineup that includes a certain dinosaur attraction, family animation, thrillers and horrors, comedies and period charmers from Focus Features such as “Downton Abbey: A New Era” and “Mrs. Harris Goes to Paris.” .

“Our business cannot become tents and branded intellectual property,” Orr said. “We have something for every audience segment. Audiences crave that and exhibitors crave that.”

Jason Blum, the powerhouse producer and director at Blumhouse, is hoping Scott Derrickson’s supernatural horror “The Black Phone” will be one of those “non-superhero” pop specials of the summer when it opens June 24.

Beyond franchises, there’s a wide range of options: Dramas (“Where the Crayfish Sing,” “Elvis”); action photos (“Bullet Train”); romantic comedies (“Shotgun Wedding”); the creeps (“Observer”, “Bodies, bodies, bodies”, “Resurrection”); and even a mockumentary about a small seashell, “Marcel the Shell With Shoes On.”

“Annihilation” writer-director Alex Garland also has an original thriller, “Men,” opening in theaters May 20. Jessie Buckley stars as a woman who retreats to the English countryside in search of peace after a personal tragedy only to face more horrors from the men of this picturesque town.

Garland is a bit worried about the movie industry and the seismic shifts going on under the surface that are “part cultural and part economic.”

“Any time an interesting movie comes out and it underperforms, I get a kind of lingering anxiety about it,” Garland said. “If the only movies that make money are for younger audiences, something changes culturally. Something changes about the kind of movies that get financed.”

Meanwhile, the streaming companies remain strong. Netflix has a huge slate of more than 35 movies for the summer, including the spy thriller “The Gray Man,” directed by the Russo brothers and starring Ryan Gosling and Chris Evans. Other streamers are launching some of the hottest titles from this year’s Sundance Film Festival, including “Good Luck To You, Leo Grande” (Hulu), “Cha Cha Real Smooth” (Apple TV+), “Emergency” (Amazon ) and I’m fine?” (HBOMax).

“Streaming has a place in the world, but it’s not the only thing in the world,” said Blum, who is convinced there is still an appetite to go to theaters.

For Bruckheimer, it is perhaps even simpler.

“It all depends on the movies. It’s always about the movies,” Bruckheimer said. “If there are things that people want to see, they will appear.”