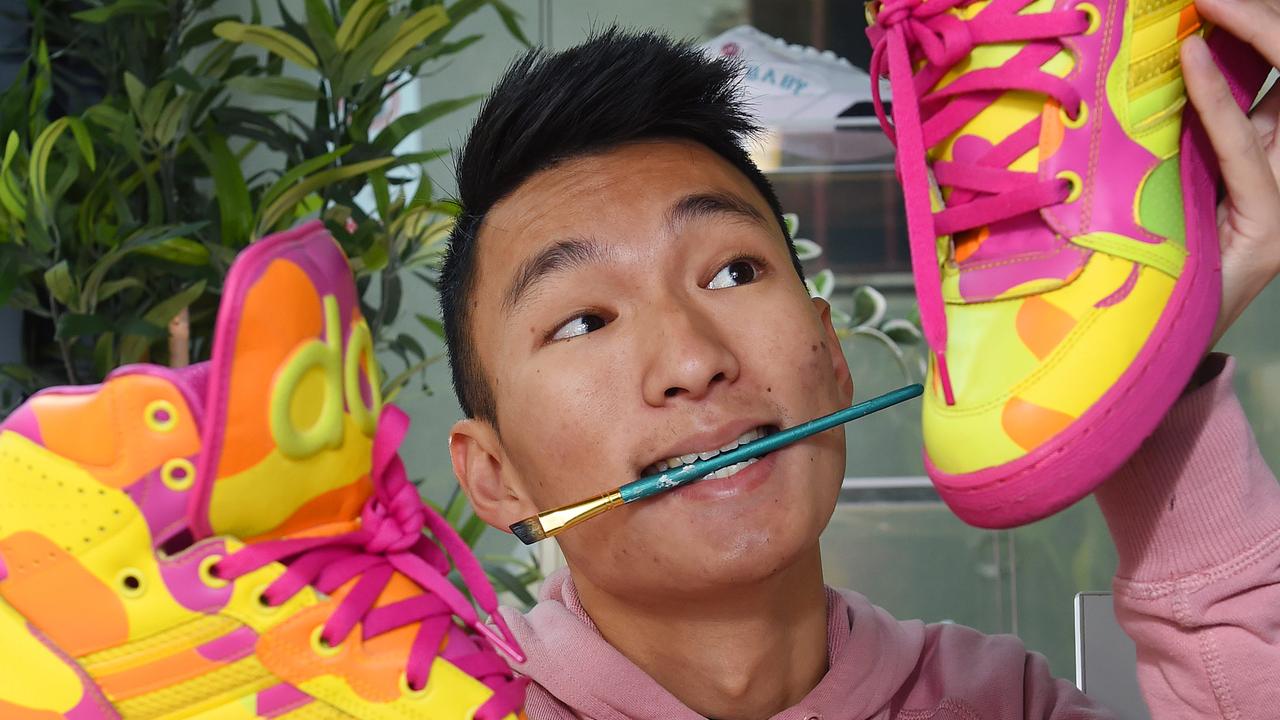 The uni student ditched a law career after noticing something important when he walked into a store with a pair of dirty sneakers.

A Melbourne man has ditched a career in law after he made far more than he could have ever imagined — $1.2 million — from cleaning other people’s shoes.

Eugene Cheng, 29, has sported many different pairs of kicks — footwear appropriate for school, then army combat boots and later on, black business shoes for his various internships in stuffy law firms.

But his love of sneakers wouldn’t go away.

As a dual Aussie and Singaporean citizen, he was conscripted in Singapore’s military at the age of 18.

“You’re forced to wear army boots pretty much six days a week,” Mr Cheng told news.com.au. “One day you do get to wear something else and you appreciate wearing sneakers so much more.”

The same went for summer internships in the corporate world; “Suits were just not comfortable, the shoes were extremely uncomfortable and the combination of that and working for someone else wasn’t appealing to me.”

While studying law back in his home town of Melbourne, the then-university student stumbled across a gap in the market and seized the opportunity.

“I had a pair of sneakers that I really didn’t want to have to throw out, it’s still a pair that means a lot to me,” he recalled.

But he couldn’t find anywhere that could restore his shoes to a quality that made them salvageable — and so The Sneaker Laundry was born.

“I started looking up sneaker cleaning techniques,” Me Cheng said.

“I went and bought a sneaker cleaning kit at a Melbourne alley way store. None of the staff knew how to use it. That’s when it sort of just clicked.”

He described looking “to the ends of the earth” for the best ways to clean sneakers.

It was here that he came across US YouTuber Chase Maccini, who advocated for restoring sneakers rather than throwing them out to reduce waste.

The two decided to team up and three months later, despite completing his law degree and being a fully-qualified lawyer, Mr Cheng opened his own laneway store in Melbourne.

Mr Cheng, his business partner Mr Maccini and a few friends got together $120,000 to bootstrap the idea.

“When we opened the store we had $500 left in the bank account,” Mr Cheng said with a laugh, explaining that rent, refurbishment and products cost more than they had anticipated.

But The Sneaker Laundry got off to a running start.

Soon he was getting referrals from nearby Melbourne stores such as Nike and Dolce and Gabbana.

He has even opened a store in Beirut, Lebanon.

Customers can drop off their sneakers at one of his stores, or post their shoes to be cleaned and then sent back.

He’s also created cleaning kits that can be mailed to anyone in the world.

To date, he and his 14 staff have cleaned 29,000 shoes and have exported his cleaning kits to 65,000 customers in 45 different countries.

Now, four years since launching, the business has turned over $1.2 million in revenue.

Mr Cheng initially had a store opened in Sydney as well, on George St, but it had to shut down due to the coronavirus pandemic.

There are plans to reopen the Sydney store next month.

He now wants to kick his empire up a level by giving people the opportunity to buy shares in The Sneaker Laundry via a Birchal equity crowd-funding raise.

The money raised will be used to open up stores both nationally and internationally, as well as increasing his online sales space.