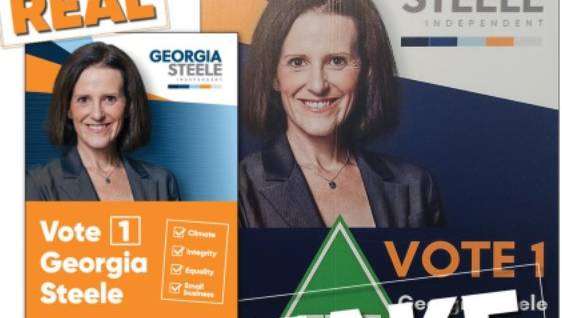 About 100 election corflute signs for the Hughes Independent Georgia Steele were destroyed Thursday night and another 30 were replaced with forgeries.

There were similar attacks on the cartels of two other independents, Zali Steggall in Warringah and Dr. Sophie Scamps in Mackellar.

Ms Steele, who revealed the vandalism in a Facebook post and email from the campaign, said the signs were on private property and she had reported the matter to the Australian Electoral Commission and the police.

“Last night our corflutes were smashed and stolen, and fake ones installed in their place,” he wrote. “The phone booths were also spray painted.

“These materials were paid for by donations from the community and are completely destroyed, from Waterfall to Wattle Grove.”

“We removed them at the request of Ausgrid,” a spokeswoman for the campaign said.

Since then, signs for Acting MP Craig Kelly have been put up on many power poles, and the leader was also provided with a photo showing a Scott Morrison sign on a power pole on Princes Highway, Sylvania. A comment has been sought from the office of him.

Ausgrid issued a warning to candidates in April that the practice was illegal.

Mr. Kelly has also been on the receiving end of vandalism.

Resident Adam Snell took a photo of one of Mr. Kelly’s signs among the illegally dumped rubbish on Fowler Road, Illawong.

The glass window of Kelly’s election office in Sutherland has also been smashed.