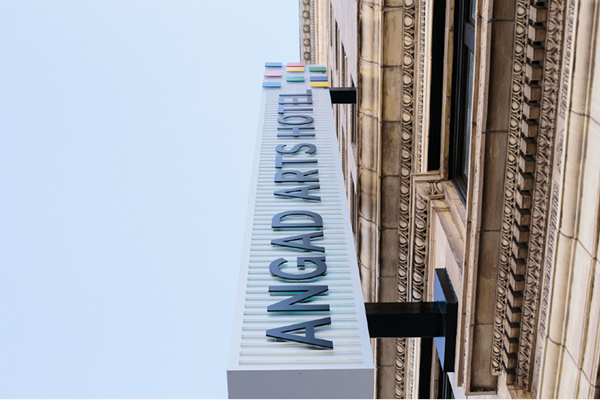 The bi-annual exhibit showcases the work of local artists, rotating artwork each spring and fall.

Farmer combined what he learned at Lindenwood with online video tutorials to get started creating 3D illustrations on an old MacBook. Since that first Angad piece, he has appeared in four of the hotel’s six shows and is now known as the “Angad Arts Hotel elevator art guy.” The artist describes his work as “moody, but motivating at the same time” or “inspiring sadness”. The latest exhibition at Angad Arts Hotel, which opened on May 10, will showcase Farmer’s new animations that are inspired by Ukrainian culture. Both pieces pay tribute to the nation and will be used to raise funds for the Ukrainian Red Cross.

“The goal of my series is to highlight the Ukrainian culture and try to make sure that more people become aware of what [we’re] in danger of losing,” says Farmer.

The concept originally came from an online friend of Farmer’s who lives in the Ukraine and had to flee to Poland once the war started. The friend was documenting his experience with the ongoing war, and Farmer was inspired by the artwork that was being produced.

Vanessa Rudloff, the hotel’s arts relations manager and the person who discovered Farmer, says the hotel hopes to raise awareness of the situation in Ukraine through Farmer’s artwork.

“[Farmer] I was very inspired by the conflict and the Ukraine, and really, like most artists right now, I was just like, ‘What can I do? What about my talents that I can do to raise awareness or raise some money?’” Rudloff tells the RFT. “And then he started to make inroads there.”

One of Farmer’s pieces is a four-part series that focuses on digital scans of sculptures from a virtual museum in Krakow, Poland. The sculpture represents the culture of Eastern Europe. Farmer describes the first part of her series as dramatic and opera-oriented.

The second piece focuses on Pysanky Eggs (also known as pysanka), a Ukrainian tradition similar to American Easter eggs, except these are used for larger celebrations in Ukraine, such as religious ceremonies or holidays, as well as good luck symbol. Eggs are also considered talismans and omens of good.

The farmers’ pieces will be accompanied by a QR code that links to donations for the Ukrainian Red Cross, the best place the artist said he could find in his research. The Red Cross is on the ground, Farmer says, and all money donated goes directly to support them.

Also on display at Angad are artworks by 35 other artists, totaling 46 pieces. All artwork is created by artists within 200 miles of the hotel, with the majority coming from emerging and mid-level artists, but established artists will also be on display. Rudloff says the exhibit is often diverse: He once had a 90-year-old woman and a 17-year-old boy at the same exhibit. 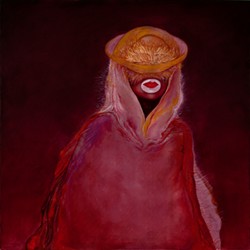 One of the pieces exhibited at the Biennial Exhibition, along with Farmer’s digital animations.

“It’s very important to me that people get a sense of all the different…people…that are creating in the area,” says Rudloff. “I think if someone came and saw the show on multiple different occasions, I feel like different pieces would speak to them at different times.”

The Angad Arts Hotel, at its core, is a passion project, says Rudloff. And Farmer’s work is no different: he would tell new artists, in his experience, to create something meaningful and do it with a purpose.

When it comes to the hotel, Farmer says she knows Rudloff and the rest of the team are very passionate about having local artists on display. Rudloff says it all goes back to the words of the hotel’s original founder, Angad Paul: “What is art but seeing the world in a different way? And what is life but a series of interconnected experiences?

Farmer will continue to create 3D animations and artwork to raise awareness of Ukrainian culture through social media. Angad’s biannual exhibit will feature Farmer’s work until she begins a fall rotation in late October. Shows open in late fall and early spring; to find out when forms open, potential artists should email Rudloff. The art manager also offers tours of the hotel for those interested in viewing the artwork.