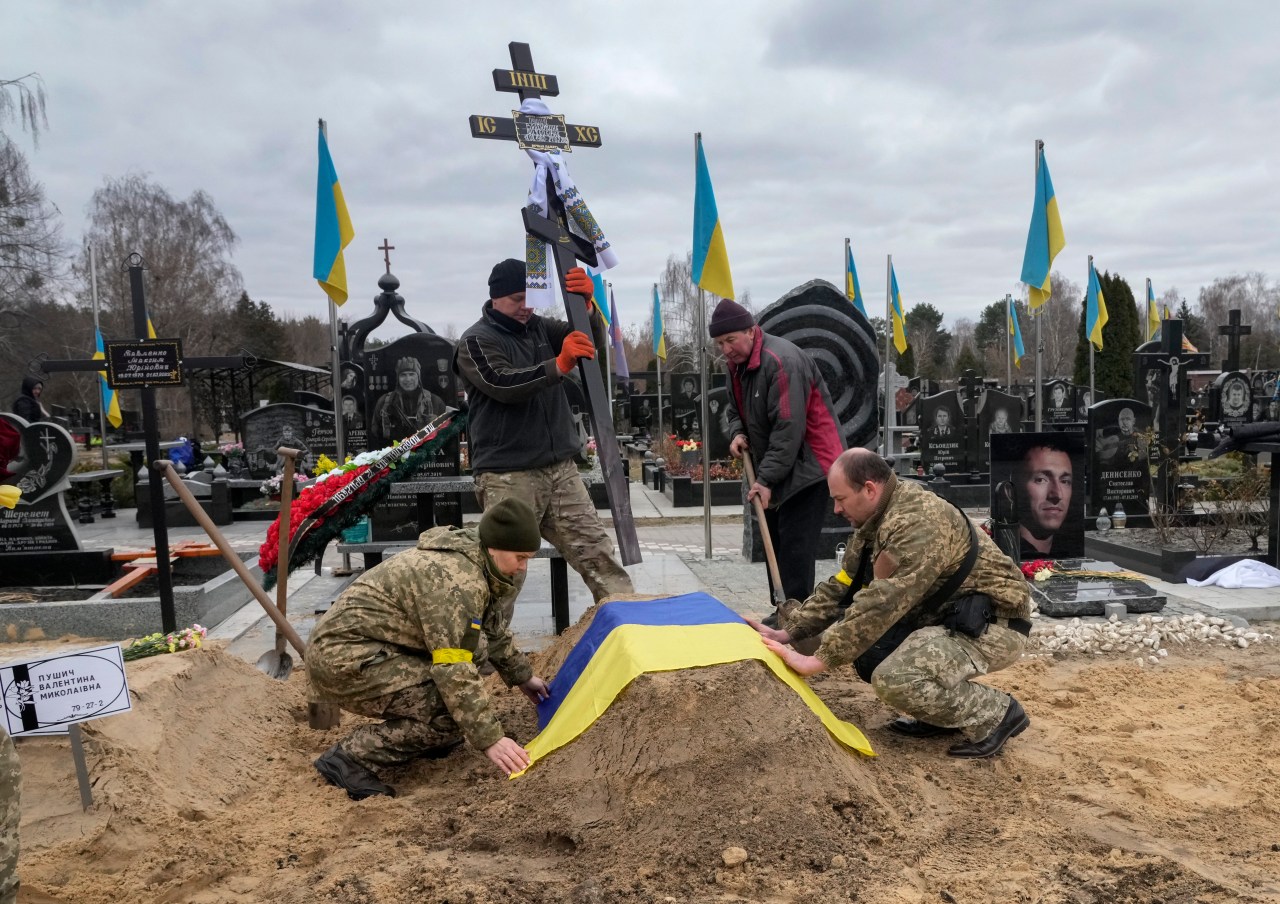 The latest developments on the Russia-Ukraine war:

CHISINAU, Moldova – US Secretary of State Antony Blinken is in Moldova pledging America’s support to the small Western-leaning former Soviet republic that is coping with an influx of refugees from Ukraine and warily watching Russia’s intensifying war with its neighbor.

Blinken was meeting on Sunday with senior Moldovan officials who are appealing for international assistance in dealing with more than 120,000 refugees from Ukraine that it is now hosting while also seeking security reassurances against potential Russian aggression. More than 230,000 people have fled into Moldova from Ukraine since the war began 11 days ago.

Blinken said Moldova’s welcoming of refugees is an inspiration to the world.

“We admire the generosity of hospitality, the willingness to be such good friends to people who are in distress, and, indeed, I want to do everything we can to help you deal with the burden that this has imposed,” he said.

Russia already has troops in the country of 2.6 million that are stationed in the disputed territory of Transnistria and are being closely watched as Russian President Vladimir Putin presses ahead with the invasion of Ukraine. Although it has no plans to try to become a member of NATO, Moldova formally applied to join the European Union just three days ago in a fast-track bid to bolster its ties with the West.

LONDON — British military officials on Sunday compared Russia’s tactics in Ukraine to those used in Chechnya and Syria, where cities were bombarded and heavily damaged after Russian forces faced unexpected resistance from their defenders.

The strength of Ukrainian resistance continues to surprise Russian forces and they have responded by targeting populated areas, including the cities of Kharkiv, Chernihiv and Mariupol, Britain’s Ministry of Defense said in its daily intelligence briefing.

“This is likely to represent an effort to break Ukrainian morale,” the ministry said in a statement. “Russia has used similar tactics in Chechnya in 1999 and Syria in 2016, employing both air and ground-based munitions.”

Russia’s advance has been slowed by attacks on its supply lines, the ministry said. As a result, there is a “realistic possibility” that Russia is now trying to disguise fuel trucks to reduce losses.

TEL AVIV, Israel — Israel’s prime minister has returned from a surprise trip to Russia where he met President Vladimir Putin and discussed the war in Ukraine.

Naftali Bennett flew to Moscow on Saturday, where he met the Russian leader for three hours. The trip was made “in coordination and with the blessing” of the Biden administration, according to Bennett’s office.

Bennett spoke to Ukrainian President Volodymyr Zelenskyy after his meeting with Putin. He then flew to Germany to meet Chancellor Olaf Scholz.

Bennett landed in Israel on Sunday morning and is expected to agree to his Cabinet for its weekly meeting later in the day.

Bennett’s trip was the latest attempt at diplomacy in the Russia-Ukraine crisis. Israel is one of the few countries that has good working relations with both Russia and Ukraine. Israel has delivered humanitarian aid to Ukraine, but also maintains ties with Moscow to make sure that Israeli and Russian warplanes do not come into conflict in neighboring Syria.

KYIV, Ukraine — A Ukrainian paramedic who was shot while on her way to evacuate injured people from the outskirts of Kyiv was buried in the country’s capital on Saturday.

Valentyna Pushych was known locally as “Romashka,” which means “Daisy.” A friend of hers described her as a “daredevil,” who was never afraid to “get under bullets.’

She was always “running to the most dangerous places” to rescue the injured, Nataliia Voronkova said.

Pushych used to be a well-paid worker at a transport and logistic company. But in 2016, she joined the army as a paramedic in response to the separatist conflict in eastern Ukraine.

Several women, including some dressed in camouflage jackets, cried as her body lay in a casket at a service. A portrait of Pushych was on a wall nearby.

At the cemetery, red roses were placed on Pushych’s body. After she was buried, the dirt was covered with the flag of Ukraine.

KYIV, Ukraine — Crowds of men have been lining up in Kyiv to join the Ukrainian army.

An order from Ukraine’s government prohibited men between the ages of 18 and 60 from leaving the country to keep them available for military conscription.

“We know why we are here. We know why we defend our country. And our guys that are actually standing there and fighting Russian military forces,” he told Britain’s Sky News. “We know what we are doing and that’s why we will win.”

Others, like British Army veteran Mark Ayres, traveled to Ukraine to help.

Ayres said the Ukrainian people have been inspiring and “it’s galvanized everybody.”

“I’ve got no illusions. I’ve got no romantic ideas of war or like ‘I’m going to be some hero’ or make a difference … but it is what I do,” Ayres said.

BEIJING — Chinese Foreign Minister Wang Yi told US Secretary of State Antony Blinken that China opposes any moves that “add fuel to the flames” in Ukraine.

Blinken says the world is watching to see which nations stand up for the principles of freedom and sovereignty.

The two spoke by phone on Saturday, the Chinese Foreign Ministry said.

Wang called for negotiations to resolve the immediate crisis, as well as talks on creating a balanced European security mechanism. Wang says the US and Europe should pay attention to the negative impact of NATO’s eastward expansion on Russia’s security.

The US State Department says Blinken underscored that the world is acting in unison in response to Russian aggression and ensuring that Moscow will pay a high price.

China has broken with the US, Europe and others that have imposed sanctions on Russia after its invasion of Ukraine. China says that the sovereignty and territorial integrity of all nations should be respected, but that sanctions create new issues and disrupt the process of political settlement.

WASHINGTON — US President Joe Biden has called Ukrainian President Volodymyr Zelenskyy to discuss ongoing efforts to impose economic costs on Russia and to speed US military, humanitarian and economic assistance to Ukraine.

The White House said the pair also discussed talks between Russia and Ukraine during the more than 30-minute call early Sunday in Ukraine, but offered no additional details.

Zelenskyy said on Twitter the two presidents discussed security, financial support for Ukraine and the continuation of sanctions against Russia.

“I’m grateful to him for supporting Ukraine with words and deeds” Zelenskyy said in a tweet. “Next week we will receive another batch of Starlink systems for destroyed cities.” He joked that they discussed possible space projects, which he would talk about “after the war.”

Kyiv Mayor Vitali Klitschko on Saturday showed off a shipment of the Starlink systems that had arrived in the capital city. He said Starlink would help secure the work of critical infrastructure and the defense of the city.

Several large Ukrainian cities remained without internet or phone connection after being shelled by Russian troops.

CHERNIHIV, Ukraine — Russia has dropped powerful bombs on residential areas of the city of Chernihiv, a regional official said Saturday.

Vyacheslav Chaus posted a photo of what he said was an undetonated FAB-500, a Soviet-designed 500-kilogram (1,100-pound) air-dropped bomb.

“Usually this weapon is used against military-industrial facilities and fortified structures,” said Chaus, head of the same-named region of Chernihiv. “But in Chernihiv, against residential areas.”

The city of Chernihiv, located north of Kyiv and with a population of 290,000, has come under heavy fire from Russian forces. Officials said 17 people in the region were killed in the shelling.

A video released Saturday by the Ukrainian government showed people cheering as they watched a Russian military plane fall from the sky and crash.

NEW YORK — Mastercard and Visa are suspending their operations in Russia, the companies said Saturday,

Mastercard said cards issued by Russian banks will no longer be supported by its network and any card issued outside the country will not work at Russian stores or ATMs in the latest blow to the country’s financial system after its invasion of Ukraine.

Mastercard said it made its decision after discussions with customers, partners and governments.

Visa said it’s working with clients and partners in Russia to cease all Visa transactions over the coming days.

The suspensions are a follow-up to more limited moves earlier in the week to block financial institutions from the networks that serve as arteries for the payments system. Russian people have already been hit hard by heavy sanctions and financial penalties imposed by the US government and others.

Follow AP’s coverage of the tensions between Russia and Ukraine at https://apnews.com/hub/russia-ukraine