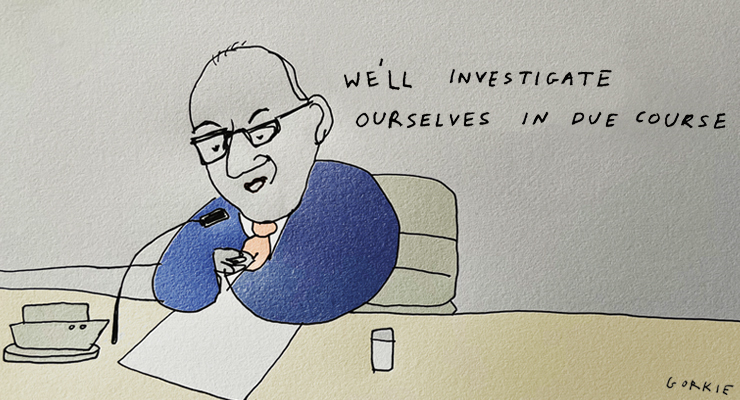 Home Affairs Secretary Michael Pezzullo and Operation Sovereign Borders chief Rear Admiral Justin Jones should be in the line of fire for what appears to be a major violation of caretaker conventions related to the politicized announcement of a illegal sea vessel on election day.

Andrew Greene of ABC revealed that it was Morrison’s office that pressured Internal Affairs to announce the arrival of a ship, in violation of the Coalition’s long-standing confidentiality policy, and Internal Affairs agreed that Jones, as chief of Borders Sovereigns, I could announce it.

Prime Minister Anthony Albanese confirmed this morning that the PMO had contacted his team about Saturday’s announcement, in accordance with interim conventions, and refused to accept the announcement.

This means that Internal Affairs and Jones apparently violated a central aspect of the caretaker conventions.

Not surprisingly, Scott Morrison and his team destroy one last standard of public integrity by walking out the door: they have degraded and disgraced Australian public life for three and a half years, casually abusing caretakers’ conventions in pursuit of one last dirty The Minute Fear campaign is true to form.

But no matter how politicized public service is, adhering to the conventions of caregivers is something close to sacred. If the civil service cannot be trusted to be independent once Parliament is dissolved, we are on our way to a fully political American-style civil service that must be cleaned up at every change of government.

In the absence of any additional information, Internal Affairs’ convenient decision that an ad policy change was acceptable without opposition agreement is a material violation. Nor would a middle manager have taken it; unless internal communication had completely broken down in that department, Pezzullo would have been automatically informed of the PMO’s request. The secretaries have the final oversight of compliance with the caregivers’ rules, such as applications for political office.

Jones, who appears to have had the responsibility for the ad foisted on him as an unwanted gift, was placed in an envious position: his is an operational role, not a political one, so it shouldn’t have been his decision. Still, the provisions of the caretaker also apply to him.

Although the government has asked the Home Office to carry out an investigation into what happened on Saturday, it is inappropriate for Pezzullo and his department to conduct any kind of investigation into their own behaviour. Only an independent investigation, with coercive powers, will serve to properly explore what errors in judgment were made and by whom.

That is all the more the case given that Internal Affairs, and its predecessor departments, have long been the least competent and worst-run department in the public service, with a staggering list of scandals and disasters going back even before the coalition government. .

Albanese said this morning that he had confidence in Pezzullo. He may have spoken too soon. We need a proper investigation of this rotten department before anyone is cleared.