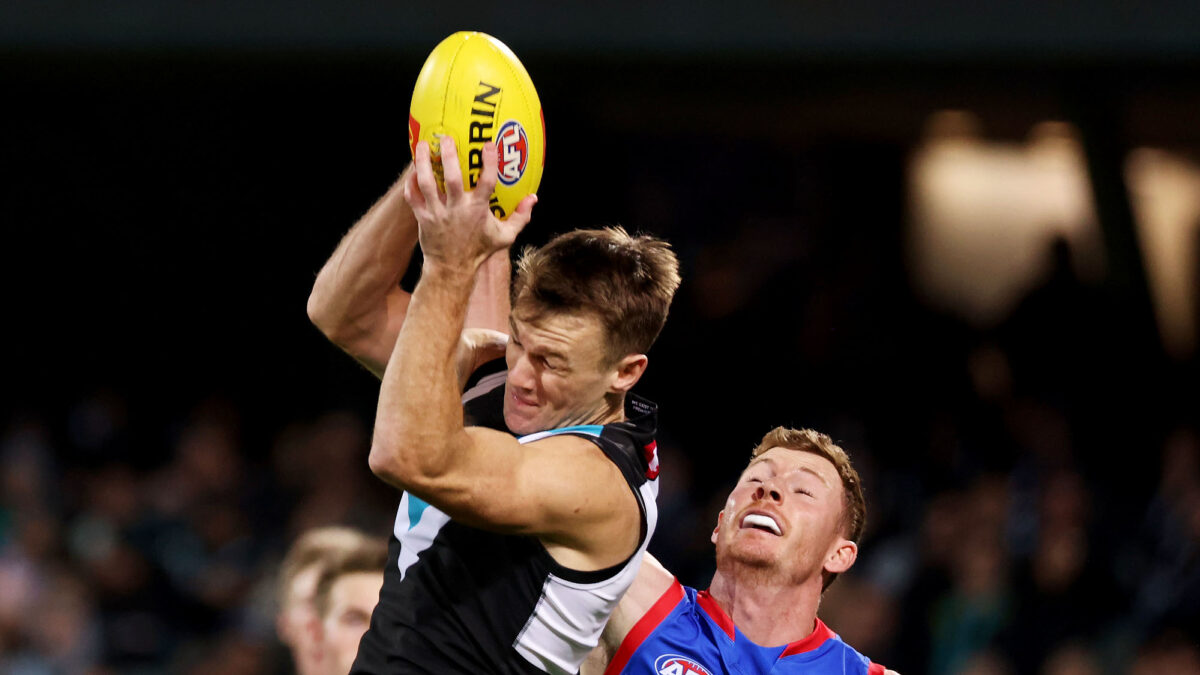 The Western Bulldogs’ backline has never been what won them games, but with a dominant midfield that protects them from repeated tackles more often than not, it has proven effective enough over the years.

But the Dogs are not the team they once were in 2022, and the crux of their problems in a loss to Port Adelaide that was far more emphatic than the scoreboard suggests, centered on the bottom line.

Mercilessly cut off in the first half by the Power on the counterattack, and unable to stop the hometown strikers from scoring pretty much everything that came their way in the second, this was the most dismal defensive performance we’ve seen all year. Indeed, it took the Dogs’ midfield dominance for much of the first half, and Port’s inaccuracy beyond that, to keep this contest close.

Comparing the Dogs’ setup on Friday night to that of Melbourne, the masters of defensive organization, was almost like watching a different sport. Where the Devils maintain their structure no matter what, with Steven May happy to be behind the play and the rest of the unit rallying around him, the Bulldogs seemed drawn to their opponents like bees to a pot of honey all night.

Whether it was a coaching move by Luke Beveridge or otherwise, Tim O’Brien, the Dogs’ designated interceptor, regularly followed Robbie Gray wherever he went, creating ample space inside the 50 for him to play. will use the power. Then, when he found himself one-on-one inside the arc, intelligence from Gray and some clever kicks from Power’s midfielders, particularly Connor Rozee, saw the veteran capitalize with two first-quarter goals.

With the Dogs dominating from the middle from the start (they were 7-2 up on center punts in the quarter hour, despite missing captain and talisman Marcus Bontempelli), there would always be dire consequences if the Power mids they had a race.

Which they did after halftime. Through the early stages of the third term, the Power won six center clearances in a row and had the Dogs pay full price for most of them.

With O’Brien sidelined with a calf injury, and Alex Keath missing, the Dogs’ backline, with fill-in doctor Hayden Crozier as second-high, made Todd Marshall and Jeremy Finlayson look like Dunstall and Brereton. No Charlie Dixon has made the Power look toothless at times on offense this year, but not tonight.

Marshall disappears from games too often at this stage of his career to be an elite striker, but with five goals against Adelaide and West Coast already this year, he can go wild when he’s on the song, or when a mismatch comes his way. . Scoring everything that came his way in the third period, he would score two goals in quick succession to put the Power’s lead, small for much of the game, into safe territory.

It was here as much as anywhere that the Dogs sorely missed Bontempelli, who regularly returns to the defense and provides timely loot to help in the passing game. Also noticeably lacking was Tim English’s intercept-marking prowess: Stefan Martin isn’t capable of that anymore. Needless to say, Keath would also have made a noticeable difference.

Strangely, the Dogs’ main weakness this year, their attacking line, actually seemed reasonable, against an admittedly small Port Adelaide defence. Aaron Naughton was outstanding with four goals and plenty of trademarks in the package, although his lead into space in the fourth quarter after a string of gut-busting runs was just as eye-catching, while Buku Khamis looks like he may have a future in the attack. .

That’s where the injury carnage hit hardest, though, with Cody Weightman (arm) and Laitham Vandermeer (hamstring) failing to finish the game. If they miss any periods of football, the chance of the Dogs resurrecting their season seems slim.

There’s no denying that the Power was good – they look back at his best damage on the field, with his slippery ball movement and front structure humming much more pleasantly than in previous rounds. They, at least, seem capable of running into September, who would have thought a month ago?

However, the most impressive performance of the night came from Fremantle, except that their opposition was turnover-happy North Melbourne.

Without Matt Taberner and Rory Lobb on offense, the Dockers could easily have chosen to rest on their miserable defense and North’s loss of Nick Larkey and pull out a win. Instead, his goal was to dazzle and get his wings into the game.

The result was a flashy, fast-moving footy brand that shows the Dockers have plenty of strings to their arc. David Mundy remains one of the best in the business at delivering inside 50, while midfielders Hayden Young and Jordan Clark also pushed up to help their forwards feast.

Sean Darcy was huge in the ruck, helping the Dockers dominate free space 38-31; while the Roos’ forays forward were constantly hampered by their poor foot skills. 67 within 50 to 32 is a colossal disparity; in fact, North’s defense probably did a reasonable job of keeping them to ‘just’ 15 goals.

But it was a night for the little Dockers, and it showed that even without Taberner and Lobb, this Freo is still more than capable of kicking a game-winning score. Bailey Banfield, often on the fringes of this team, could have had a big bag if it weren’t for inaccuracy; he, Sam Switkowski, Michael Walters and Lachie Schultz terrorized the Roos backline all night, and the goals flowed as a result.

Really, the best player on the Roos, and the most important of the entire year, was Ben McKay. An intercepting titan in the third quarter, his knee injury that saw him substituted for three quarters came too late to be the death knell on the Roos’ chances of victory, but it could prove very costly down the road.

The only hit on Freo in recent weeks has been their attacking line, with questions about whether they can challenge the best in the business, Melbourne, on the attacking front. Based on tonight’s evidence – and you can’t discount that warning from North Melbourne – the answer is a resounding yes.