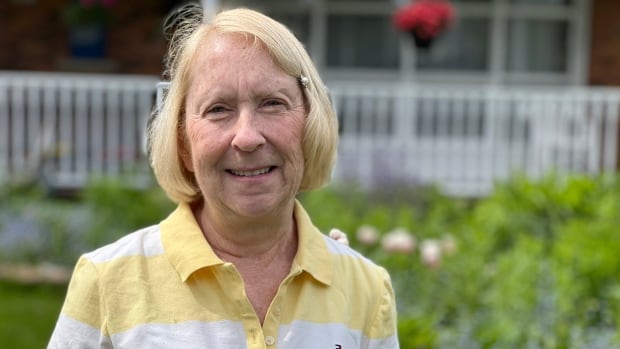 As the sky darkened and the wind began to howl on Saturday, Ann Baker was sprinkling holy water in her backyard and putting her faith in a small statue of the Virgin Mary.

There was a time, when the branches lashed and the windows were so lashed by rain that she couldn’t see outside, that she looked at her husband and thought “here we go again.”

Four years ago, a tornado ripped through the hydroelectric corridor behind his home on Aurora Crescent and, as if drawn by a magnet, sucked up a 40-foot-tall maple tree in his front yard, turning it into “matches” in a matter of seconds.

We are just in the wrong place at the wrong time.-Ann Baker

What was left of the tree crashed into the house where Baker lived with his family for the past 35 years.

“It took out the roof, the chimney, the back cover and blew out the furnace, and then it cracked the foundation, and then we had a flood,” he said Wednesday.

The family faced tens of thousands of dollars in repairs not covered by insurance.

Since then, a large flower garden has taken the place of the tree, but amid the constant hum of generators and bundles of broken branches piled up all over the street this week, the memories remained for residents who moved back to 2018.

The Manordale-Woodvale area was hit once again last weekend when a destructive and deadly wind storm hit Ottawa, leaving tens of thousands in the city without power.

“I don’t think it’s cursed or that we’re cursed,” Baker said. “We’re just in the wrong place at the wrong time.”

Despite being the target of tornadoes and wild winds, those who live along Aurora Crescent say they don’t plan on leaving, crediting their neighbors for giving them the strength to withstand whatever comes their way.

‘Your neighbors are good neighbors’

Follow an extension cord that snakes out from Baker’s garage and you’ll find a generator running in Denise Haney’s garage next door.

You know when they say lightning doesn’t strike twice? Well, she does.-Denise Haney

It’s been there for 32 years, a tenure that includes the 1998 ice storm. When the tornado hit four years ago, it took some of their lawn furniture with it. He left something behind: the top fifteen feet of a tree pierced through the roof of him.

“You know when they say lightning doesn’t strike twice?” she asked. “Well, she does. We know now.”

After the storm, the street came alive with neighbors coming out of their houses to check on each other and lend a hand, sharing chainsaws and generators, residents said.

Haney said she has no plans to leave, despite being hit twice.

Bob Scott lives a few doors down and remembers the tornado that rattled power lines and then roared past with a sound like a haul truck.

It was largely spared in 2018, but the pile of tree limbs it has now accumulated shows this storm was a different story.

A neighbor’s tree snapped in half and crashed into his yard, and he lost a fir tree in the backyard, but Scott considers himself lucky when it comes to cleanup.

“It was like a community effort … and everyone trying to help everyone,” he said.

“It gives you a good sense of security and your neighbors are good neighbors.”

A huge maple tree still stands in Baker’s backyard. It dropped a couple of branches on Saturday, which smashed into the roof and deck that had come in after the tornado.

There’s a big dent in the railing, but that’s the only real mark left by the right.

Despite everything the family has been through, Baker has a secret weapon under the tree that he relies on to keep them safe.

It is a statue of the Virgin Mary, and he adds that they are “blessed” because even when other trees have been destroyed, that maple has stood tall.

“I couldn’t find a rhyme or reason why, except that the Virgin Mary protected her,” he said.

“This is our own little insurance policy, and a great one at that.”