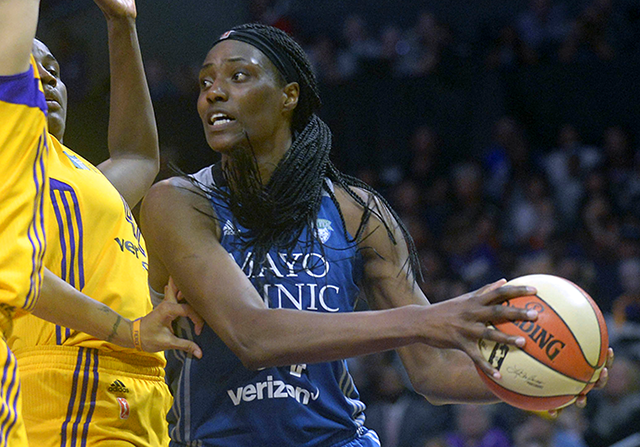 Cutdown Day is especially brutal in the WNBA compared to major men’s professional sports. College programs are producing more players than ever with professional potential, but the WNBA hasn’t expanded to keep pace. With a strict salary cap, no injured list and no inactive list, there aren’t enough roster spots among the 12 teams to guarantee even every first-round pick will get a bench seat.

Months ago, Lynx coach and general manager Cheryl Reeve knew she was facing a roster crisis. With future Hall of Famer darling Sylvia Fowles entering her final season, Reeve spent up to the $1.379 million limit to try to send Fowles off with one more WNBA title. Reeve signed unrestricted free agent Angel McCoughtry, a five-time All-Star and two-time Olympic gold medalist, and brought back point guard Layshia Clarendon, whose arrival in all five games last season helped the Lynx overcome an early 0-4 to make the playoffs for the 11th straight year.

Those and other moves left the Lynx exactly $622 under the cap to go to training camp according to Reeve. Spending heavily on veterans meant the Lynx could only carry 11 players instead of 12. One of them, star forward Naphessa Collier, is due to give birth this month and she may not play until August.

Clarendon appeared fully recovered from the stress reaction in her right lower leg that affected her late last season. Then, more than a week ago, Reeve said, her leg started giving Clarendon trouble. Clarendon did not participate in a scrimmage and exhibition match in Washington, which worried Reeve. Facing a season that expanded and condensed at the same time (a record 36 games plus the playoffs before the FIBA ​​World Cup in late September), Reeve felt he couldn’t start with a starting point guard who might miss exercises or a game. here and there handling a sore leg.

Until Tuesday, Reeve never hinted that Clarendon’s place on the team was in jeopardy. That’s what made the team’s Cutdown Day move so impactful.

Never in their history have the Lynx fielded as many talented players as they did on Tuesday: a starter (Clarendon); the 2020 Rookie of the Year (Dangerfield); their 2021 first-round pick (Davis, who missed last season with a stress fracture in his left foot); speedy veteran shooting guard Yvonne Turner, another free agent signing; and 2022 draft picks Kayla Jones and Hannah Sjerven. Then, in another upset, Reeve re-signed former Lynx Odyssey Sims to start at point guard.

“It wasn’t that Lay (Clarendon) became a bad basketball player,” Reeve said. “It has nothing to do with Lay’s ability to not lead or play. I’m just looking forward to starting the season, (they weren’t) in a good enough place physically.”

Clarendon gained an immense following on social media as the first openly non-binary player in WNBA history, that is, a person who does not identify exclusively as male or female. (Clarendon uses the pronouns he, she, and they; MinnPost is using they.)

Released by New York three games after last season, Clarendon joined the Lynx on a series of hardship exception contracts before signing for the rest of the season. Hardship exceptions allow teams to go over the cap to sign replacements for players who are injured or playing overseas.

Clarendon basically saved the season. They averaged 10.4 points and 5.7 assists on 51.7 percent shooting from the field, helping the 22-10 Lynx emerge late to clinch the No. 3 playoff spot. The Lynx won 16 of the 21 games Clarendon appeared in. But the stress reaction sidelined Clarendon for seven of the final eight regular-season games, then limited Clarendon to 11 minutes in an 89-76 second-round loss to eventual league champion Chicago.

None of the waived players were present Tuesday when the Lynx opened practice to the media. On Twitter, Clarendon responded to the news with “Sighhhhh” and a series of emojis, none of which featured a smile. In a follow-up tweet, Clarendon wrote: “I have no comment other than I am 100% cleared to play and practice. I feel strong and ready to play!”

The resignation of popular former UConn star Dangerfield also sparked a strong reaction on social media. Dangerfield arrived late at camp after leading his team in Israel, Elitzur Ramla, to a league championship. But Reeve instead chose Banham, the former Gopher who moved exclusively to base at the start of camp, as Sims’ backup.

“I told her (Dangerfield), she did everything right. She didn’t do anything wrong,” Reeve said. “She went abroad and she played just like we asked her to do, she brought them a championship. As a result, she missed some training camps. At the end of the day, that’s not a factor. The numbers were what they were, and decisions were going to have to be made. Once again, it is not easy.

“She has a really special season in 2020 and was part of our Big Three. That’s how fast things change.”

The availability of Sims offered another view of the same problem. Sims started 21 games for Atlanta last year but was fired at the end of the season. Though he played well over the winter in the fledgling Athletes Unlimited league, no WNBA team invited her to training camp.

It’s no secret that the WNBA needs to expand, but that’s easier said than done. WNBA Commissioner Cathy Engelbert told The New York Times in January that the expansion cannot happen until the league generates more revenue. “We’re absolutely going to expand in the future,” she said, “but we’re not just expanding for expansion’s sake until we get more advanced in the economic model.”

Until then, there will be more difficult days like Tuesday throughout the league.

“It’s really hard to see someone go, people that we really love, people that we build relationships with,” Banham said. “I feel very, very grateful to be on this team. It is a difficult situation. We all knew it was going to happen, but it’s difficult.”

So are these Lynx any better than the group Chicago beat in the playoffs last year?

We may know more after this weekend; the Lynx open the season Friday night in Seattle before returning to the Target Center on Sunday night to take on Washington. One bonus: The Washington Mystics won’t be bringing in two-time MVP Elena Delle Donne, who will take occasional breaks after two years of back problems.

The fast start Reeve hoped for now seems unrealistic. Like last year, the Lynx will start the season with fewer personnel. McBride is abroad with his team in Turkey and probably won’t be in the United States for another two weeks. McCoughtry, who is still strengthening his surgically repaired right knee, received an injection of platelet-rich plasma this week to speed healing and did not travel to Seattle. Dantas (right foot sore) is out indefinitely. With no cap room to add anyone, the league granted the Lynx two hardship exceptions to bring back Turner and add free-agent center Nikolina Milic from Serbia.

“When you make the kind of changes that we made a couple of days before we started, you should probably expect that it’s going to take a little bit of time,” Reeve said. “I’ll have to be a little more patient than I normally would be.”