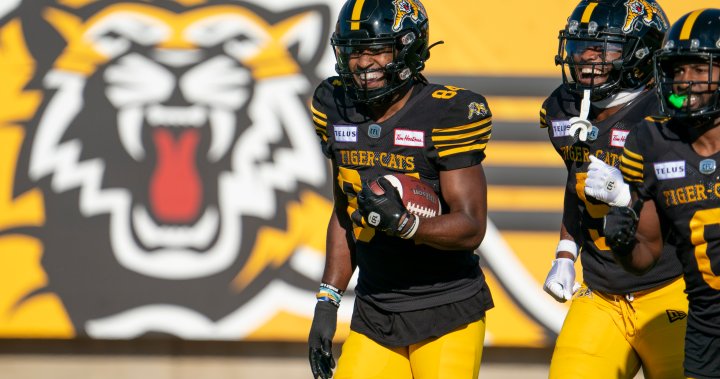 Dane Evans threw a 3-yard touchdown run to Tim White with 19 seconds left, leading the Hamilton Tiger-Cats to their first win of the season, 25-23 over the visiting Ottawa Redblacks on Saturday night.

For a moment late in the fourth quarter, it looked like the Ticats’ season-opening losing streak would reach five games after Evans fumbled deep in Hamilton territory and Ottawa’s Laurenzo Mauldin recovered it in the one yard line.

Redblacks QB Caleb Evans ran for a one-yard touchdown on the next play to give his team a 23-18 lead with just over seven minutes left in regulation.

Argos came from behind to defeat the Riders 30-24 after a decisive touchdown in Wolfville, NS

But after making a key defensive stop with about a minute to go, Dane Evans completed passes to Bralon Addison and Tim White to get the Tiger-Cats into the red zone. The drive ended with the game winning score.

Dane Evans finished the game with 342 passing yards and two touchdowns, the other going to wide receiver Anthony Johnson, who scored his first touchdown in the Canadian Football League, giving Hamilton an 18-10 lead late in the first half. .

Ottawa’s Caleb Evans was 18-of-30 for 203 yards, threw for a touchdown and rushed for two more majors. He rushed eight times for 62 yards but was also intercepted by Kameron Kelly and Alden Darby Jr.

The loss leaves the Redblacks 0-5 and bottom of the league.

Hamilton plays next Thursday, July 21, against the BC Lions (3-1) in Vancouver.