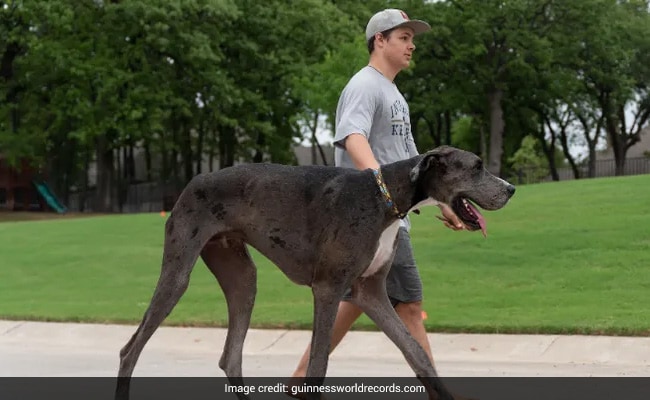 Owner Brittany Davis told GWR that she always dreamed of owning a Great Dane. Fortunately, her brother’s colleague raised them and gave her an eight-week-old puppy.

Brittany was initially nervous about having such a large dog in the house, but it turned out to be love at first sight, GWR said.

Zeus was the largest cub in a litter of five.

“He’s been a big dog for as long as we’ve had him, even for a puppy. He had huge paws,” Ms. Davis told GWR.

Great Danes were originally bred to hunt boar, but according to Ms. Davis, Zeus prefers a laid-back approach to life.

Zeus’s favorite is the Dallas Farmers Market, where the dog is quite famous. Ms. Davis said that frequent stares and surprised reactions are common occurrences when Zeus is in public.

According to GWR, the tallest dog in history was also a Great Dane named Zeus, a coincidence. He belonged to Kevin and Denise Doorlag from Michigan. That dog passed away at the age of five in 2014.

The Great Dane breed of dog was developed at least 400 years ago in Germany, according to Encyclopedia Britannica. It is a fast and alert dog that stands out for its courage, friendliness and reliability.

The Great Dane has a massive, square-jawed head and body line that give it a graceful appearance. In Germany, the breed is called Deutsche Dogge (German dog).