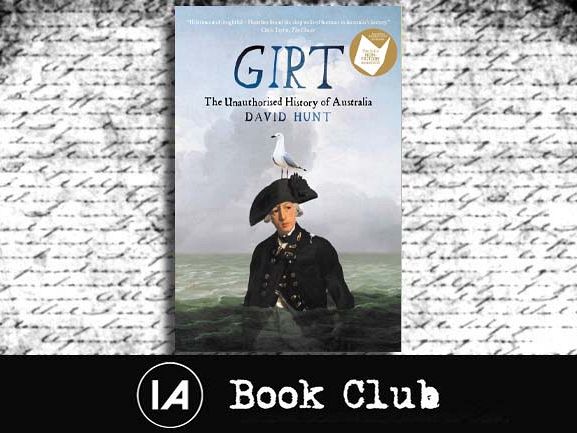 Peter Baker reviews David Hunt’s ‘GIRT: The Unauthorized History of Australia’, a compelling book that manages to both educate and amuse.

BACK IN TIME, some six decades ago, I was a pale, pimply youth sitting for my NSW Leaving Certificate. Having pretensions of being a bit of a history buff, two of my units in the final year of secondary schooling were ancient history and modern history.

Looking back now, having finished reading David Hunt’s GIRT: The Unauthorized History of AustraliaI think: “Oh, David, why didn’t you write my textbooks?”

Hunt has produced a “history” that takes the reader through the discovery of Terra Australis (in British terms, carefully ignoring the fact Makassar Indonesian fishermen had been trading with the locals in Arnhem Land for many years) by James Cook and particular input to this feat by Joseph Banks, Governor of NSW Arthur Phillip and others.

Where the book shines, in my view, is through the anecdotes the author has thrown into the mix about these people and the multi-layered fusion of clergy, criminals, prostitutes, military and pastoralists who made up the early colony.

Unlike when I slogged through modern and ancient history textbooks all those years ago, reading Hunt’s book now has done two things for me: I learned something new and, most importantly, found myself laughing aloud.

Governor Arthur Phillip’s claim to fame was that he had two Christian names: Arthur and Phillip. Banks was an egotistical snob who looked down on Cook, the crew, the prisoners and the passengers. Many of the female passengers were on the manifest as “seamstresses.” They were in fact London ladies of the night, brought along to service those among the crew prisoners and not given to sodomy — at the time, a hanging offence.

This underlay of humorous asides would have gone so well back in my history class. “Caesar crossed the Rubicon in 45BC” is an extract, I recall, from my book read. Hunt, I am sure would have added a little tidbit. “As they crossed the river, Brutus noticed the bream were running. Ships were stopped and Caesar and the sailors had a great hour together fishing before pressing on to the coming battle.”

The book is educational, referencing all those chaps and personalities associated with the First Fleet and the emerging colony in whose honor we’ve since erected enormous statues. But, importantly, it lets us know many were seriously flawed in character — totally uncaring of those in classes below them and certainly disdainful of the local Indigenous population. It’s educational and it is interesting. And, best of all, humorous.

I bet very few Australians are aware of the fact a large percentage of the First Fleet prisoner population was guilty of no more than stealing a handkerchief. Nor about the role played by the Boston Tea Party in the future settlement of Australia.

“GIRT” is a great read. I most highly recommend it to everyone. In particular, to those of my older generation, raised never to study Australian history beyond 1770 and the Rum Rebellion.

‘GIRT: The Unauthorized History of Australia’ is available from Booktopia for $24.75 (paperback) RRP.

Peter Baker is a retired chartered accountant. He worked in the Australian Taxation Office for some 30 years, leaving at acting assistant commissioner level to go into private practice in Riverina, NSW.