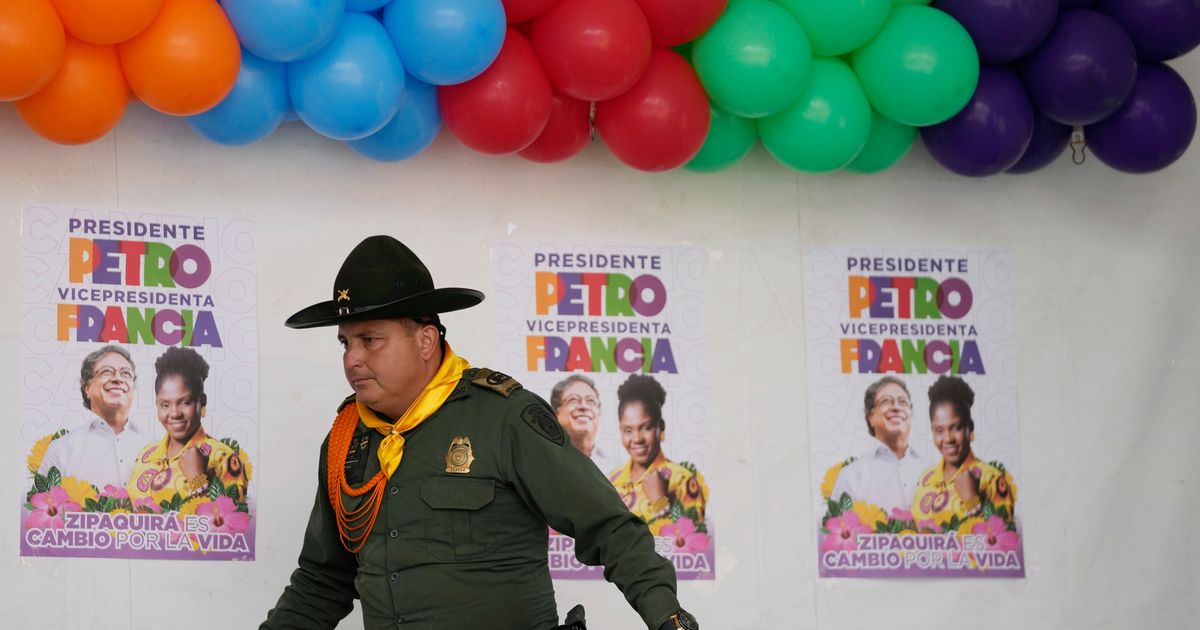 Now, as Colombia heads into its presidential elections on Sunday, Espinel walks the streets of Bogotá’s working-class sectors handing out flyers for front-runner Gustavo Petro and helps paint murals in support of the leftist politician.

“Youth in this country are stagnant,” said Espinel, who lost his job as an event planner during the pandemic and received no compensation from his company. “We hope Petro can change that. We need a different economic model than the one that has been failing us for years.”

Colombians will choose among six candidates in a vote that will take place amid widespread sentiment that the country is headed in the wrong direction. The latest opinion polls suggest that Petro could get 40% of the vote, with a 15-point lead over its closest rival. But the senator needs 50% to avoid a runoff election in June against the second-place finisher.

His main rival for most of the campaign has been Federico Gutiérrez, a former Medellín mayor who has the backing of most of Colombia’s traditional parties and is running on a platform of pro-business economic growth.

But populist real estate tycoon Rodolfo Hernández has been rising rapidly in the polls and could contend for second place in Sunday’s vote. He has few connections to political parties and says he will reduce government waste and offer rewards to Colombians who expose corrupt officials.

Petro, a former guerrilla with anti-establishment rhetoric, promises to make significant adjustments to the economy and change the way Colombia fights drug cartels and other armed groups. His agenda is largely focused on combating the inequalities that have affected the population of the South American nation for decades and that have worsened during the COVID-19 pandemic.

He has promised government jobs to people who can’t get a job, free college tuition for young Colombians and subsidies for farmers struggling to farm, which he says he will pay for by raising taxes on wealthy individuals and corporations.

His agenda also touches on issues that could shake Colombia’s close relationship with the United States.

Adam Isacson, a defense policy expert at the Washington Office on Latin America, a think tank, said that if Petro wins the election “there will be more disagreement and estrangement” between the two countries.

Petro wants to renegotiate a free trade agreement with the US that has boosted imports of US products such as milk powder and corn. and instead favor local producers.

He also promises to change the way Colombia fights drug cartels that produce about 90% of the cocaine currently sold in the US The senator is often critical of US drug policy. rural areas, to give farmers alternatives to growing coca, the plant used to make cocaine.

Isacson said that coca eradication goals could become less of a priority for the Colombian government under the Petro administration, as well as the rate at which drug traffickers who are arrested are sent to the US to face charges.

The election comes as Colombia’s economy struggles to recover from the pandemic and frustration with political elites grows.

A Gallup poll taken earlier this month indicated that 75% of Colombians believe the country is headed in the wrong direction and only 27% approve of conservative President Iván Duque, who cannot run for re-election. A survey conducted last year by Gallup found that 60% of respondents found it difficult to survive on their household income.

Sergio Guzmán, a political risk analyst in Bogotá, said the pandemic and the 2016 peace deal with the Revolutionary Armed Forces of Colombia rebel group have changed voters’ priorities.

“While previous elections focused on issues like how to deal with rebel groups, now the main issue is the economy,” Guzmán said. “Voters are concerned about who will address issues like inequality or lack of opportunity for young people.”

If Petro or Hernández were to win the presidency, they would join a group of leftist leaders and outsiders who have been taking over Latin American governments since the pandemic began in 2020.

In Peru, voters elected rural school teacher Pedro Castillo to the presidency even though he had never held office. Castillo challenged political parties that have been embroiled in bribery scandals and presidential impeachment trials and blighted the nation’s response to the coronavirus pandemic. Ecuadorians defied the leftist trend last year, but still chose an outside opposition candidate, Gullermo Lasso.

In regional matters, Petro seeks to restore diplomatic relations with the socialist government of Venezuelan President Nicolás Maduro. Colombia severed diplomatic ties with Venezuela in 2019 as part of a US-led effort to isolate Maduro and pressure him with sanctions into holding new elections.

Some observers believe that Petro could be in a position to build bridges between Maduro and some sectors of the Venezuelan opposition.

“Resolving the political and economic crisis in Venezuela is in the interest of Colombia,” said Ronal Rodríguez, a professor at the Universidad del Rosario in Bogotá.

Sandra Borda, a professor of international relations at the Universidad de Los Andes in Bogotá, said that Petro might not have enough influence to make significant changes in Colombia’s foreign policy.

Efforts to renegotiate the free trade agreement with the United States could be thwarted by lawmakers from both countries, he said. And when it comes to security, the Colombian armed forces will resist giving up cooperation agreements with the US that include joint exercises, intelligence sharing and jobs for Colombian military instructors in US-funded courses in other Latin American countries.

Borda said Petro’s ability to change Colombia’s foreign policy could depend on whether he wins the first round outright. If he has to go to a second round, he said, he will have to make deals with the center parties, which could support his internal reforms in exchange for greater control over security and international relations.

“His priority will be to carry out internal reforms aimed at reducing inequality and overcoming poverty,” said Borda. “Petro understands that if he does it, he has a better chance of consolidating his political movement.”