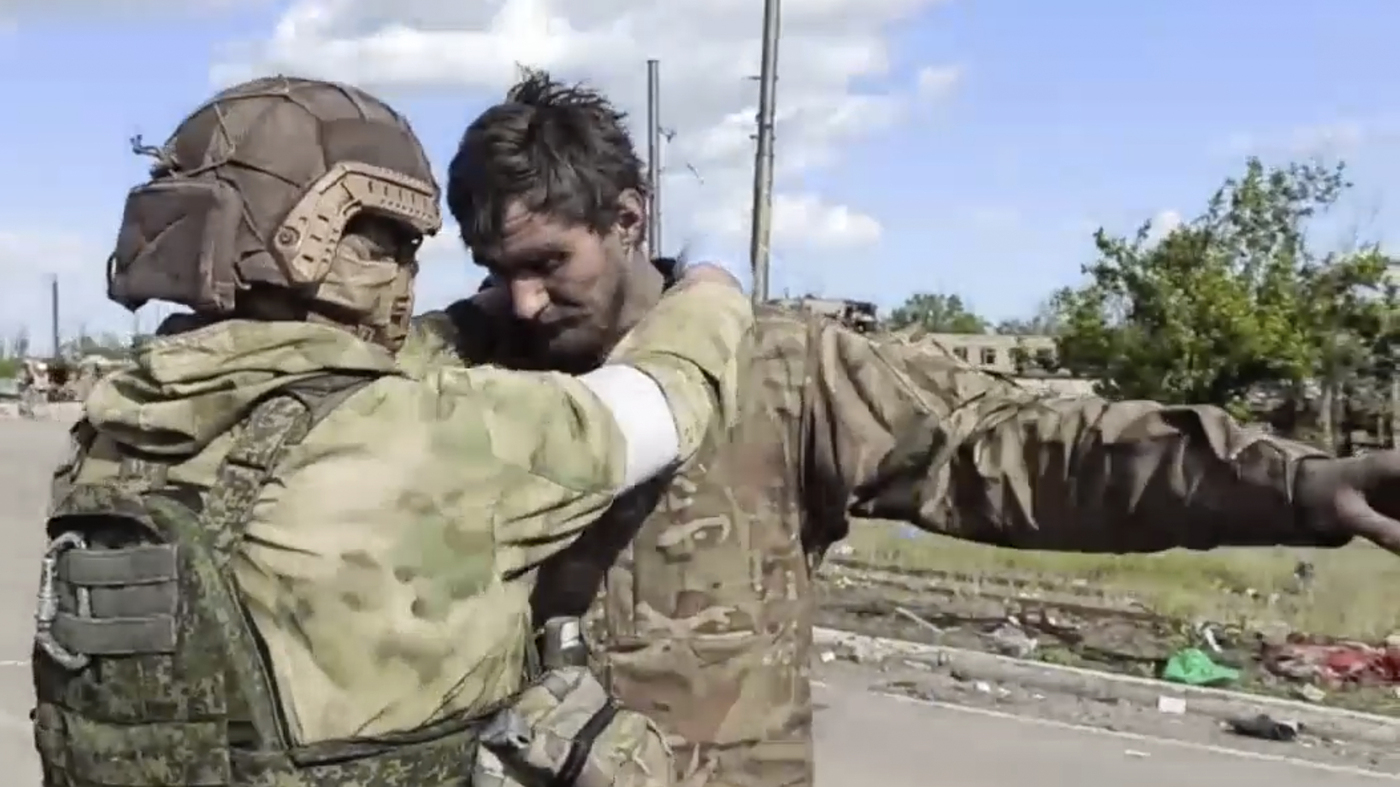 In this still taken from a video released by the Russian Defense Ministry on May 20, 2022, a Russian military officer frisks a Ukrainian soldier leaving the besieged Azovstal steel plant in Mariupol.

In this still taken from a video released by the Russian Defense Ministry on May 20, 2022, a Russian military officer frisks a Ukrainian soldier leaving the besieged Azovstal steel plant in Mariupol.

POKROVSK, Ukraine — With Russia claiming to have taken nearly 2,500 Ukrainian fighters prisoner from the besieged Mariupol steel plant, concerns about their fate grew as a Moscow-backed separatist leader promised they would face court.

Russia has declared full control of the Azovstal steel plant, which for weeks was the last holdout in Mariupol and a symbol of Ukrainian tenacity in the strategic port city, now in ruins with more than 20,000 residents feared dead. The seizure gives Russian President Vladimir Putin a much-desired victory in the war that began nearly three months ago.

As the West backs Ukraine, Polish President Andrzej Duda has arrived in Ukraine on an unannounced visit and will address the country’s parliament on Sunday, his office said.

Poland, which has taken in millions of Ukrainian refugees since the start of the war, is a strong supporter of Ukraine’s desire to join the European Union. With Russia blockading Ukraine’s seaports, Poland has become a major gateway for Western humanitarian aid and weapons entering Ukraine and has been helping Ukraine get its grain and other agricultural products to world markets.

The Russian Defense Ministry released a video of Ukrainian soldiers being detained after announcing that its forces had cleared the last holdouts of the Mariupol plant’s sprawling underground tunnels. He said a total of 2,439 had surrendered.

Relatives of the fighters, who came from a variety of military and police units, have called for them to be granted prisoner-of-war rights and eventually returned to Ukraine. Deputy Prime Minister Iryna Vereshchuk said on Saturday that Ukraine “will fight for the return” of each of them.

Denis Pushilin, the pro-Kremlin chief of an area of ​​eastern Ukraine controlled by Moscow-backed separatists, said some foreign nationals were among the captured fighters, without providing details. He said they would surely face a court. Russian officials and state media have tried to characterize the fighters as neo-Nazis and criminals.

“I believe that justice must be restored. There is a request for this from ordinary people, society and probably the sane part of the world community,” Pushilin was quoted as saying by the Russian state news agency Tass.

Among the defenders were members of the Azov Regiment, whose far-right origins have been exploited by the Kremlin as part of its effort to portray the invasion as a battle against Nazi influence in Ukraine.

A prominent Russian parliament member, Leonid Slutsky, said Moscow was studying the possibility of exchanging the Azovstal fighters for Viktor Medvedchuk, a wealthy Ukrainian with close ties to Putin who is facing criminal charges in Ukraine, the Russian Interfax news agency reported. . Slutsky later retracted those comments, saying that he agreed with Pushilin that his fate should be decided by a court.

The Ukrainian government has not commented on Russia’s claim to capture Azovstal. The Ukrainian military had told the fighters that their mission was complete and that they could leave. He described his removal as an evacuation, not a mass surrender.

The capture of Mariupol furthers Russia’s quest to create a land bridge from Russia stretching through the Donbas region to the Crimean peninsula, which Moscow seized from Ukraine in 2014.

The impact on the wider war remained unclear. Many Russian troops had already been redeployed from Mariupol to other parties to the conflict.

Russian Defense Ministry spokesman Igor Konashenkov reported on Saturday that Russia destroyed a Ukrainian special operations base near Odessa, Ukraine’s main port on the Black Sea, as well as a major cache of Western-supplied weapons in the region. of Zhytomyr, in the north of Ukraine. There was no confirmation from Ukraine.

The Ukrainian military reported heavy fighting in much of Donbas in eastern Ukraine.

“The situation in Donbas is extremely difficult,” President Volodymyr Zelenskyy said in his evening video address to the nation. “As in previous days, the Russian army is trying to attack Sloviansk and Sievierodonetsk.” He said that Ukrainian forces are delaying the offensive “every day”.

Sievierodonetsk is the main city under Ukrainian control in the Luhansk region, which together with the Donetsk region forms the Donbas. Governor Serhii Haidai said the only functioning hospital in the city has only three doctors and 10 days’ supplies.

Sloviansk, in the Donetsk region, is central to Russia’s goal of capturing all of eastern Ukraine and suffered fierce fighting last month after Moscow’s troops withdrew from kyiv. Russian shelling on Saturday killed seven civilians and wounded 10 more elsewhere in the region, the governor said.

A monastery in the town of Bohorodichne in the Donetsk region was evacuated after being hit by a Russian airstrike, regional police said on Saturday. Some 100 monks, nuns and children had been seeking safe shelter in the church basement and no one was injured, police said in a Facebook post, which included video showing the extensive damage to the monastery, as well as nuns, monks and kids. boarding vans on Friday for evacuation.

Zelenskyy stressed on Saturday that Donbas is still part of Ukraine and that his forces were fighting to liberate it.

Speaking at a joint news conference with Portuguese Prime Minister Antonio Costa, he pressed Western countries for multiple launch rocket systems, which he said “just sit still” in other countries but are key to Ukraine’s success. .

Portugal and Poland, where Costa stopped for talks before traveling to kyiv, support Ukraine’s swift entry into the European Union, even if some other EU members resist granting it quick access.

US President Joe Biden on Saturday signed a new $40 billion aid injection for Ukraine, with half for military assistance. Portugal pledged up to €250 million, as well as continued shipments of military equipment.

Mariupol, which is part of Donbas, was blockaded early in the war and became a terrifying example to people in other parts of the country of the starvation, terror and death they could face if the Russians surrounded their communities.

The seaside steel mill, which occupies some 11 square kilometers (4 square miles), was a battleground for weeks. Drawing Russian airstrikes, artillery and tank fire, the dwindling group of outgunned Ukrainian fighters held out with the help of airdrops that Zelenskyy said cost the lives of many “absolutely heroic” helicopter pilots.

The Russian Defense Ministry released a video on Saturday of Russian troops detaining Serhiy Volynskyy, the commander of the Ukrainian Navy’s 36th Special Marine Brigade, which was one of the main forces defending the plant. steel industry The Associated Press has been unable to independently verify the date, location and conditions of the video.

With Russia in control of the city, Ukrainian authorities are likely to face delays in documenting evidence of alleged Russian atrocities in Mariupol, including the bombing of a maternity hospital and a theater where hundreds of civilians had taken refuge. Satellite images from April showed what appeared to be mass graves on the outskirts of Mariupol, where local officials accused Russia of covering up the massacre by burying up to 9,000 civilians.

An estimated 100,000 of the 450,000 people who resided in Mariupol before the war remain. Many, trapped by the Russian siege, were left without food, water and electricity.

The Ukrainian mayor of Mariupol warned on Saturday that the city is facing a health and sanitation “catastrophe” due to mass burials in shallow pits in the dilapidated city, as well as failing sewage systems. Vadim Boychenko said summer rains threaten to contaminate water sources as he pressed Russian forces to allow residents to leave the city safely.

“In addition to the humanitarian catastrophe created by the (Russian) occupiers and collaborators, the city is on the verge of an outbreak of infectious diseases,” he said on the Telegram messaging app.