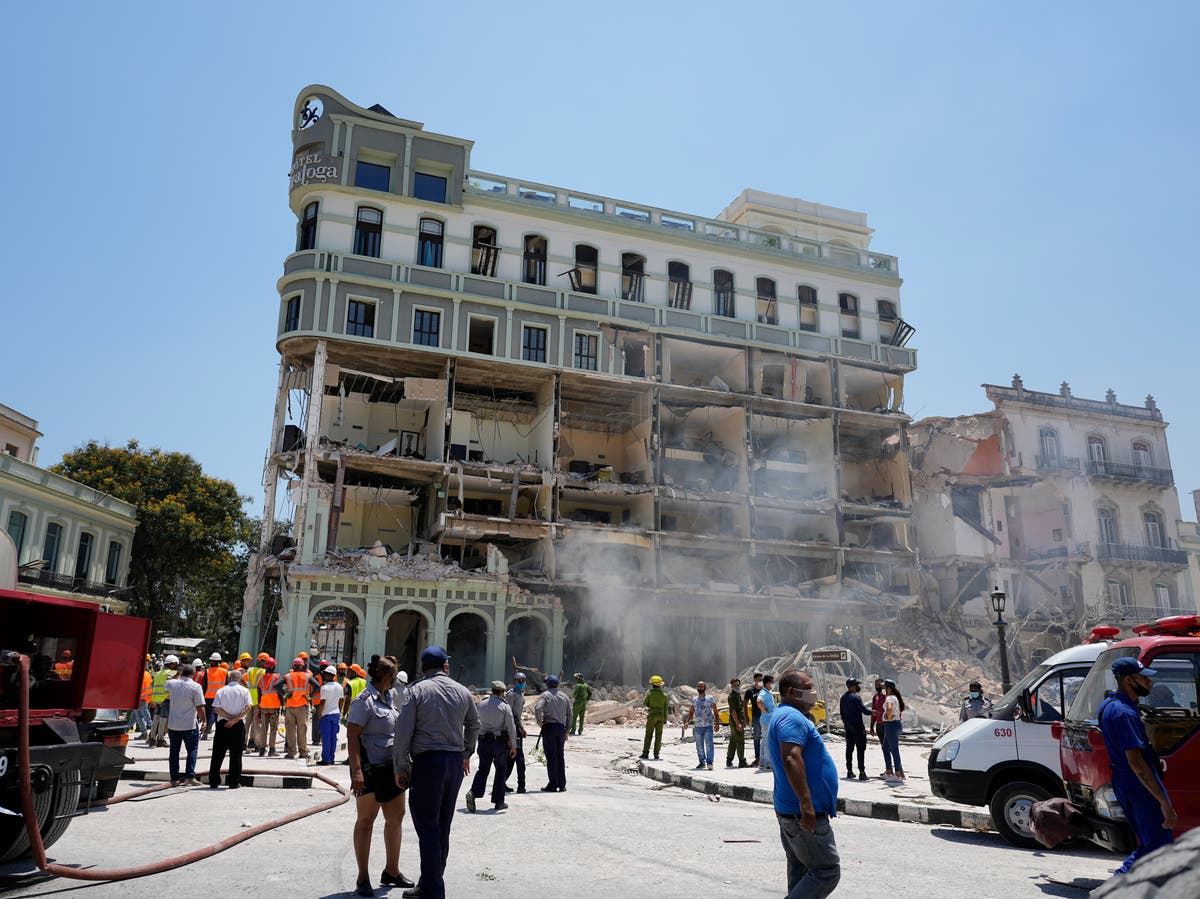 At least eight people were killed and many more injured after a massive explosion ripped through several floors of a hotel in the Cuban capital of Havana, according to reports.

Cuban President Miguel Diaz-Canel said the explosion at the Saratoga Hotel was not due to a bombing, adding that authorities are investigating the cause. He added that a preliminary investigation suggested the explosion was caused by a gas leak.

Tweeting images of the chaos, CNN Havana bureau chief Patrick Oppman wrote that the area around the “iconic hotel” was “a horrible scene of destruction.”

At least three floors of the building are shown to have been blown away in footage from the scene, as clouds of dust and smoke rise into the air.

The explosion tore off the facade and the luxury hotel was partially destroyed. The blast also damaged a nearby building in the area, not far from the Cuban capital in Old Havana. At least 13 people have been reported missing, according to government officials.

Police and firefighters are combing the rubble for survivors. Buses and cars in the surrounding area were also destroyed. Rescue teams reached the hotel as authorities sealed off the area, including nearby buildings.

After being built in 1880 to be used in part as a warehouse, the building was rebuilt as a hotel in 1933. According to the hotel’s website, it was reopened in 2005 after subsequent renovations.

“Although we have not been able to verify the origin of its name, it is likely that it comes from the American resort town of Saratoga in the state of New York,” states the hotel’s website.

“Our solidarity with the victims and affected as well as with the people of that beloved and fraternal nation,” Mexican Foreign Minister Marcelo Ebrard wrote on Twitter.

Videos and images posted on social media showed an emergency vehicle arriving at the spot where debris had fallen onto the streets surrounding the hotel.

Mr. Díaz-Canel and Prime Minister Manuel Marrero were at the hotel shortly after the explosion occurred.

“Search and rescue efforts are continuing at the hotel, where people may still be trapped,” the president’s office said.

The Concepción Arenal school in the area was one of the other buildings damaged. A teacher said three students had been injured, according to The New York Times. He added that the blast had blown out windows, sending shards of broken glass flying into the air.

Cuban state media reported that the children had been taken to the Capitol after the explosion.

Journal of the Communist Party of Cuba Granma he tweeted that the explosion occurred “while presumably transporting liquefied gas from a truck.”

The explosion took place as Cuba’s vital tourism industry was beginning to recover after being badly damaged by the Covid-19 pandemic.

Being cut off from the outside world for months, the island was hit by one of its economic crises.

The country no longer had ready access to foreign currency, something it has been relying on tourism to bring in, amid already difficult financial conditions under the decades-long US embargo.

The economic struggles sparked one of the largest protest movements in the history of the Irish nation as thousands took to the streets. Dozens of people have been jailed amid the government crackdown.

Friday morning came as the country was hosting an international tourism fair in Varadero, a seaside resort not far from Havana.