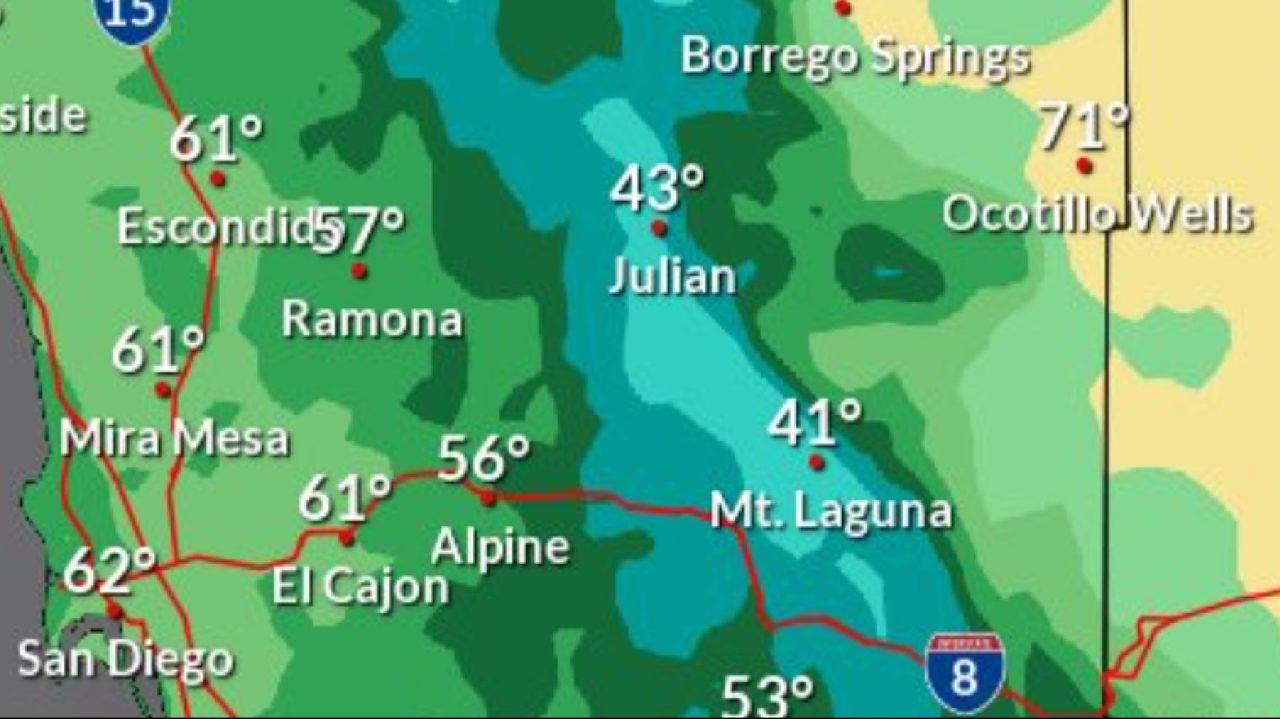 SAN DIEGO (CNS) – Rain, wind and snow were expected to dampen and cool down San Diego County through Sunday morning, with a winter storm warning in effect for mountain areas.

According to the National Weather Service, a pair of low pressure system will track over Southern California, preceded by a cold front, generating a mixed bag of atmospheric activity.

A winter storm warning was in effect Saturday for the northern mountains, and a winter weather advisory was in effect for the mountains through Saturday evening, forecasters said. Mountain snow level was predicted at around 4,000 feet.

The snow was expected to come to a gradual end over the mountains from north to south Saturday evening, ending latest in the San Diego County mountains.

“Today (Saturday) will be breezy and cool with scattered rain and mountain snow showers, most widespread in the afternoon and evening,” according to the NWS. “Strong west winds in the mountains combined with fog and periods of snow will create difficult driving conditions this afternoon and evening. Dry and warmer weather returns for Sunday through early next week, as a Santa Ana pattern sets up.”

The San Diego metropolitan area is likely to receive one-tenth of an inch of rain Saturday.

Bioluminescence is back! Keep an eye out for glowing waves

Flooding was also reported in lanes of Interstate 5 near the State Route 15 north exit toward Riverside as the rain came down.

Winds were likely to average 25 to 35 mph as the front scoots east, with likes as high as 60 mph in some locations, mostly mountains and passes, though the Coachella Valley may be impacted as well, forecasters said.

Strong west winds in the mountains combined with fog and periods of snow could create difficult driving conditions Saturday afternoon and evening, the NWS said.

SR-94 reopens after woman gets shot from moving car

Dry and warmer weather was predicted to return for Sunday through early next week as a Santa Ana pattern sets up.

For Sunday night into Monday, areas of frost may be possible in the more sheltered inland valleys. Frost and freeze alerts may be issued, forecasters said.

A warming trend will begin Monday and last through the week, along with generally dry conditions, according to the NWS.

Isolated showers could occur at times through early Sunday morning over coastal waters, the NWS said. West winds with likes of 20 to 30 knots, combined seas of 8-13 feet, and steep waves were predicted to produce hazardous conditions to small craft through Sunday morning. Strongest winds were expected Saturday morning and evening with gusts around 30 knots.. A small craft advisory remained in effect through 10 am Sunday.

Coastal surf of 3 to 6 feet and sets up to 8 feet were expected to continue through Sunday morning. Large waves and a high rip current risk may result in dangerous swimming conditions. A high surf advisory was expected to remain in effect through noon Sunday.