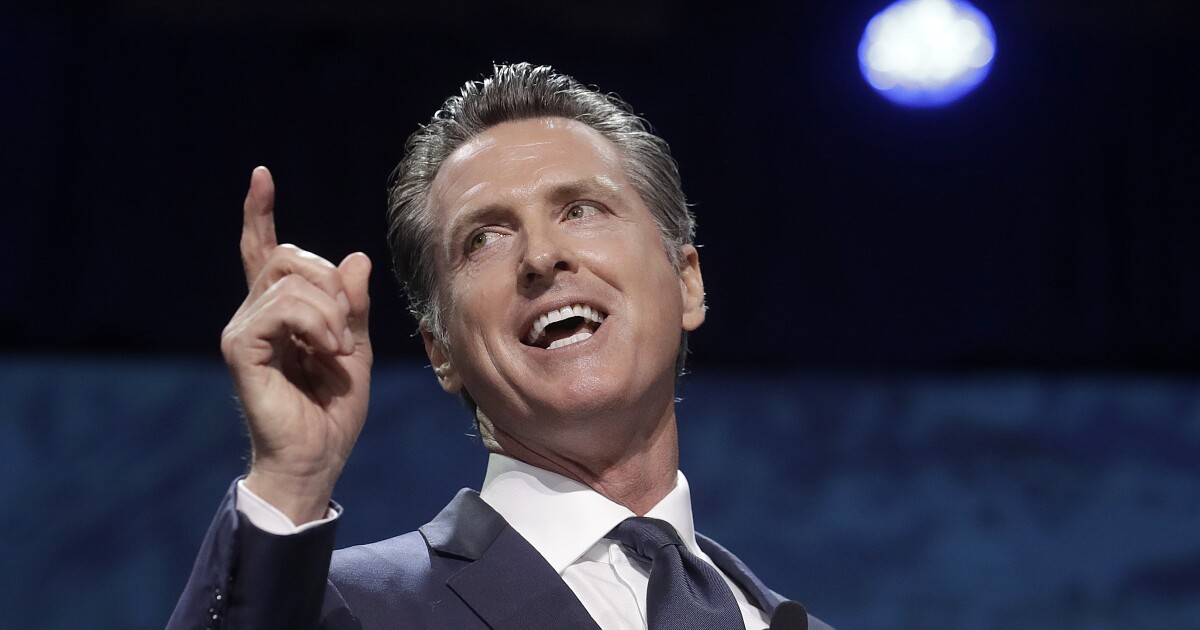 As California Democrats work to motivate their voters ahead of midterm elections in which their party is largely expected to lose control of Congress, their annual convention on Saturday instead returned into a showcase of division.

The event, which was held virtually due to the COVID-19 pandemic, featured speakers including Vice President Kamala Harris, House Speaker Nancy Pelosi and Gov. Gavin Newsom, who sought to bring the party together over his successes since last year. But the bickering between various factions overshadowed the pleas for unity by party officials who argued setting aside differences was vital for their chances in November.

One labor leader accused some in the party of being “openly hostile” to his members and said that the party needed to return to its blue-collar roots.

“We aren’t a charity, and our support is never a given,” said Andrew Meredith, president of the State Building & Construction Trades Council of California, the day after he got into a testy exchange with a committee chairwoman as he unsuccessfully tried to alter the party’s environmental platform.

“We will always put the plight of our own members at the forefront of what we do,” he said. “We must refrain from becoming the mouthpiece for unrealistic policy goals that hurt the working class and hurt the poor.”

Another labor leader denounced the influence of corporate donations and lobbyists on some elected Democrats, punctuating his speech with an expletive.

“They don’t just count on Republicans to carry their water anymore. They turn to Democrats to do their dirty work,” said Art Pulaski, the retiring longtime leader of the California Labor Federation.

A Latino leader warned Democratic politicians to avoid paying only lip service to their voters during campaign season.

“Do not take us for granted,” said Angelica Salas, executive director of the Coalition for Humane Immigrant Rights, adding that Latinos make up 40% of California’s population. “We are strong and vibrant. Our participation in elections will ensure that we go beyond the rhetoric to real change. You cannot say, ‘If possible‘during the election and then say,’It can not be done‘when you get elected.”

And the leader of the party’s progressive caucus, Amar Singh Shergill, complained that Democratic leaders did not value members’ concerns.

“We have been silenced, we have been pushed aside, we have been told we are not welcome,” he said during a caucus meeting. “And they’re taking a ton of dirty money and cleaning it to elect the worst people in that world.”

Despite California’s deep-blue tilt, the state’s Democratic leaders emphasized Saturday that the party must work hard in this year’s midterm elections to avoid losing ground to the Republican Party.

Though Newsom overwhelmingly beat back a recall attempt last year, and Democrats control all statewide offices and have large majorities in the state’s congressional delegation and Legislature, party leaders warned against complacency. More than 6 million Californians voted for Donald Trump in the 2020 election — the most in any state in the nation — and Republicans won back three congressional seats in Congress here.

“California has the power to make or break our efforts to keep the speaker’s gavel in Nancy Pelosi’s hands and out of reach for an amoral human being like [House Minority Leader] Kevin McCarthy,” said Rep. Adam Schiff of Burbank. “Make no mistake, should he ever become speaker, he will do whatever Trump demands, including overturning the next presidential election.”

Party Chairman Rusty Hicks said he was not concerned that the divisions would harm the party’s efforts this year.

“Any Democrat who is engaged in the robust discussion that takes place in a Democratic organization also recognizes what is at stake in a year like 2022, leading into 2024 and beyond,” he said in an interview. “The future of Democratic control of the House comes through California. And so I’m not concerned that the intense time of fellowship we have with one another is going to distract us from making calls, sending texts, knocking doors, sending post cards and giving to causes and candidates that matter the most in 2022.”

One cause for celebration at the convention was Newsom’s overwhelming victory in last year’s recall election.

The governor said Saturday that he “would be completely remiss if I didn’t just … thank you humbly, thank you personally, selfishly, but also thank you, on behalf more broadly of this state, for everything you did to push back against that Republican recall.”

“In an off-year, an off-month election when people thought we would put down our guard, that we’d be lulled to sleep, we stepped up in extraordinary and unprecedented ways. … It’s just a proof point, a foundational point — when we are united as Democrats, everything’s possible,” Newsom said.

Newsom, who campaigned on his support for a single-payer healthcare effort but has been faulted by some in his party for not prioritizing it since taking office, urged supporters of the system to not lose hope. Progressives incurred a defeat in the Legislature this year when a single-payer healthcare bill wasn’t brought to the floor for a vote because of a lack of support.

“Don’t think we will abandon that,” Newsom said. “But in the interim, pause and reflect on how far we’ve come.”

More than 3,600 delegates, elected officials and activists met at the virtual convention this year. The gathering lacked the pageantry and buzz of a traditional convention for the nation’s largest state Democratic Party — unlike in years past, there were no parties with musical performances by artists such as Common and DJ Samantha Ronson and no appearances by national figures not from California such as former President Bill Clinton, then-Sen. Barack Obama, and Sen. Elizabeth Warren.

Harris and Pelosi were among the elected officials at the event who pressed the importance of Democrats voting in the upcoming midterm elections.

“It is not hyperbole to say what we do between now and November will determine our future,” Harris said. “I know you can elect California Democrats up and down the ballot in 2022. I know you will protect our front-line members who are most vulnerable and expand our reach into new areas of our state. It won’t be easy, but it’ll be worth it.”

Pelosi was among the speakers who spoke about democracy in peril abroad and in the United States.

“We see threats across the Atlantic as Russia wages a diabolical, unprovoked war against Ukraine, because [Russian President Vladimir] Putin cannot stand to have a democracy at his doorstep,” she said. “Meanwhile, our nation faces threats to democracy as home, as I mentioned, a Republican Party orchestrating a cynical campaign of voter suppression, and worse, election nullification. … I do not say this lightly. Democracy and all that it stands for is on the ballot.”

California is losing a congressional seat for the first time in its history, and Democrats face strong headwinds in the midterm election because of President Biden’s low approval ratings and rising inflation. Historical trends have also shown that the party in power in the White House typically loses seats in Congress midway through their term.

Though endorsements for most congressional and legislative races were decided earlier in the convention, delegates voted on the most contentious intraparty conflicts as well as statewide contests on Saturday.

Malia Cohen, a member of the state Board of Equalization, narrowly won the nod in the controller’s race over Los Angeles City Controller Ron Galperin. Incumbent Insurance Commissioner Ricardo Lara narrowly beat back a challenge from Marin County Assemblyman Marc Levine and won the party’s endorsement for his reelection bid.

Candidates in two congressional districts failed to cross the 60% threshold required for state party backing. Long Beach Mayor Robert Garcia nearly hit the benchmark for the nod in the 42nd District, an open seat that spans southeast Los Angeles cities down to Long Beach. Former federal prosecutor Will Rollins also did not meet the threshold in the 41st District in Riverside County, which is currently represented by Republican Rep. Ken Calvert.

Endorsement results are preliminary, must be certified and can be contested and forced to a floor vote on Sunday.