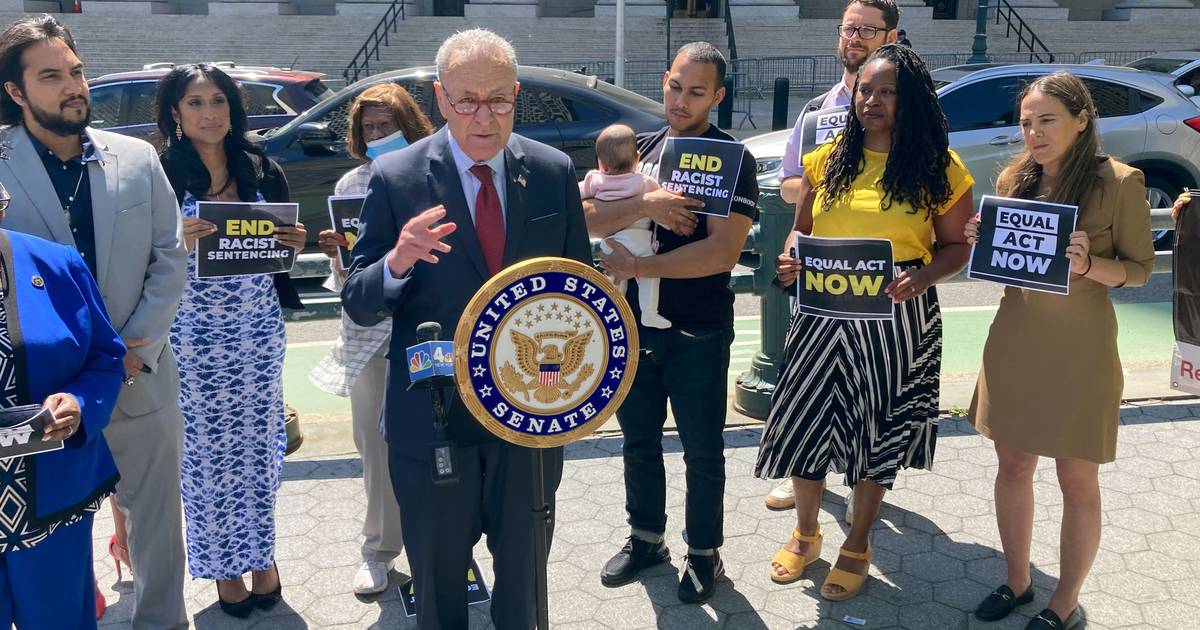 Senate Majority Leader Chuck Schumer called on lawmakers Monday to end the sentencing disparity between crack and powder cocaine that has had a disproportionate effect on black Americans.

“We have a moment to balance the scales of justice,” Schumer, a Democrat from New York, said at a news conference outside the Thurgood Marshall US Courthouse in lower Manhattan. “It’s common sense: cocaine is cocaine, and the sentences should be the same.”

In September, the House overwhelmingly passed legislation to end a sentencing formula that uses an 18-to-1 ratio in treating equal amounts of crack and powder cocaine. The bipartisan vote was 361 to 66.

Democrats and Republicans seized the opportunity to right what activists, researchers and law enforcement officials see as a historic mistake. Expensive powder cocaine has long been seen as the province of the rich, while crack is cheaper and generally associated with poorer Americans.

In fiscal year 2020, 77% of crack cocaine offenders were black and 6% were white, according to the U.S. Sentencing Commission. A 2015 report by NYU researchers found that Crack users were more likely to report a lifetime arrest or multiple recent arrests than powder cocaine users.

“This law simply corrects a mistake in the federal criminal justice system,” said Darcel Clark, district attorney for the Bronx, at the news conference. “It will end the outdated practice that disproportionately harms communities of color.”

But the bill, called Eliminating a Quantifiably Injust Application of the Law Act, has yet to land on the Senate floor this spring, and both parties are moving cautiously ahead of November’s crucial midterm elections.

Schumer, who declined to outline a timeline for passage, appeared to be embarking on a lobbying campaign aimed at clearing the space for passage of the legislation without a fierce fight on the floor.

“We’re working together, Senators Booker, Portman and myself, determining the right time frame and the right path forward,” Schumer told reporters Monday. “We want to finish this as soon as we can.”

Booker’s office said Monday that the legislation has garnered 21 co-sponsors, including 11 Republicans, since it was introduced in the Senate in January. Booker said in a statement that he was “pleased that Leader Schumer has called for a vote on the bill.”

“For decades, our nation’s drug laws have been overly punitive and riddled with racial disparities, but perhaps no law has been as fundamentally flawed as the sentencing disparity for crack and powder cocaine,” Booker said in the statement. “I hope to pass the EQUAL Act as soon as possible.”

Beginning in 1986, mandatory minimum sentences for crack and powder cocaine offenses were formulated using a staggering 100 to 1 ratio. The Fair Sentencing Act of 2010, signed into law by President Barack Obama, changed the ratio to 18 to 1. one.

“Some of our colleagues would say, ‘Well, I’ll cut it down, but I won’t match it,’” said Schumer, who at one point held up packets of sweeteners in support during the news conference. “100 to 1 was horrible, but 18 to 1 was just as horrible, as it is now. 1 to 1 is fair.”