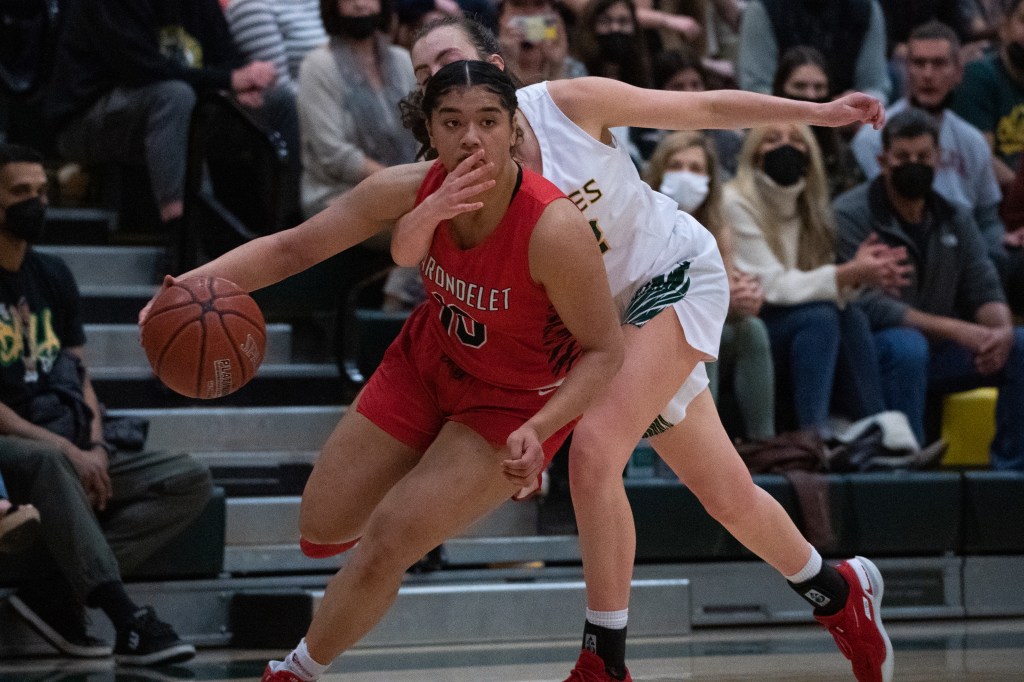 CONCORD — Carondelet High was in good shape at halftime with a 12-point lead Saturday night with sharp-shooting guard Naya Epps unable to find the range.

So when Epps began raining 3-pointers in the third quarter, the host Cougars were able to put away Oak Ridge 63-42 and advance to the CIF Northern California open division finals Tuesday night against Archbishop Mitty.

Carondelet, the top seed, improved to 26-2. Oak Ridge, from the Sac-Joaquin section and El Dorado Hills, finished its season at 25-6.

Epps led Carondelet with 17 points, all of them in the second half, with Stanford-bound point guard Talana Lepolo adding 16 and 6-foot-5 center Ashley Lewis scoring 14.

Teagan Brown, a 5-11 senior guard headed to the University of Washington, led the Trojans with 19 points.

Given Carondelet’s versatility and ability to strike from both inside and out, it was a tall order from the outset for Oak Ridge. The only time the Cougars trailed was at 4-2 after a Brown drive with 6:30 left in the first quarter.

Although Carondelet wasn’t able to find the range outside in the first half, Lepolo controlled things against the Trojans’ 2-3 zone by consistently finding open teammates in the paint. The Cougars were up 19-8 after the first quarter and led 30-18 at halftime.

“Obviously we didn’t shoot well in the first half but I think our tempo gave us some easy looks inside,” Carondelet coach Kelly Sopak said. “Then our outside shooting kicked in in the second half.

(Naya) was 0-for-9 in the first half,” Sopak said. “We didn’t tell her that. We knew we wanted her to get the ball early in the second half just to see it go through the hoop, and she hit her first one of her so that was good. ”

At one point in the second quarter, Epps scored nine straight points on three 3-pointers as Carondelet built its lead to 41-29. No. 4 came early in the fourth quarter for a 50-36 lead and her last 3-point basket with 2:02 left put the Cougars up 59-42.

With that kind of outside firepower, to go with Lepolo’s all-around floor game and the inside presence of Lewis, it was too much for Oak Ridge to handle.

“It’s a great program with a lot of tradition,” Oak Ridge coach Stephen White said. “Kelly does a great job, they’ve got a lot of athletes and they’ve got some size inside. It didn’t go as planned. We were not supposed to get in a track meet with them and we did. Got to give them credit for forcing them to do that. Our staple has been our zone, and they were prepared.”

Epps, a guard headed for UC Davis, took the advice of teammates at halftime to remain aggressive offensively.

“I started off the game pretty cold, but my teammates told me to keep shooting,” Epps said. “We knew they were going to play a high 2-3 (zone), and in the first half, we were able to beat them with layups with Talana splitting their defenders.”

Lepolo continued to dominate the floor action in the second half, finding Epps for long distance shots.

“She was able to get a lot of good draw and kicks,” Epps said. “She’s all about making the extra pass. Our shooters were able to hit today and that was awesome to see.”

Lewis, who didn’t start but has a bigger role with forward Megan Dickert injured, contributed either by scoring inside or defensively every time she entered the game.

“She’s a lot taller than anybody else and she’s got some of the best hands for a post player I’ve ever seen,” Epps said. “I don’t know if we would have won the last two games without her.”

Sopak estimated the plus-minus numbers for Lewis “must have been plus-30. When she went out we went down, when she went in her we went up.”