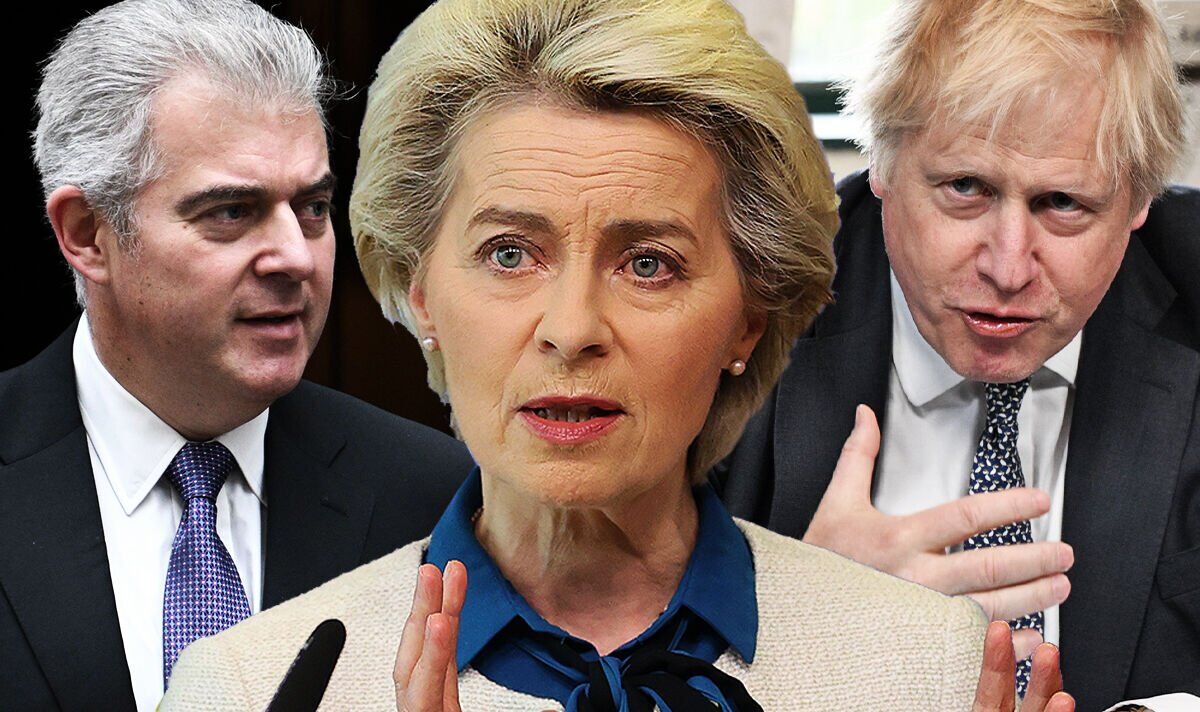 “What they are proposing would actually take us back from where we are today and that is not fair to the businesses and people of Northern Ireland.

“Fundamentally, the way the EU has tried to implement the EU, I would say, actually violates the core purpose of the protocol.

“This is a document that was supposed to protect the Good Friday Agreement, but now it is the document that is putting it at risk.”

Mr Lewis will be partly responsible for bringing a bill through Parliament to help fix the Protocol and allow people in Northern Ireland to become full British citizens again.

He is also leading talks with Northern Ireland parties to form a new executive after Sinn Fein emerged as the biggest party in elections this month.

But without a resolution on the Protocol, the Democratic Unionist Party (DUP) will veto the entire process.

But he is clear that the fault lies with Brussels and the Commission headed by Ursula von der Leyen.

He said: “We want to get a resolution with the EU, we would like to have certainty.

READ MORE: Boris Johnson’s ally on a U-turn track ‘Windfall profit tax may be on the cards’

“There is a point where the EU is not going to show flexibility when the UK government has to make a decision on how to rectify these problems for UK citizens in a part of the UK.

“Over the last few weeks, particularly after they said they weren’t going to show flexibility now, the Foreign Secretary [Liz Truss] He correctly pointed out that these negotiations are not progressing, so it is only right that we resolve this.”

He insisted that the bill announced by Ms Truss last week is not just a threat and will be carried through Parliament, but added that it is a “twin-track approach” with talks if the EU wants to get involved.

“We are open to engaging with the EU, but we have to do the right thing for UK citizens.”

Friends of Mr Lewis recently revealed that, having stood in the 2016 referendum, his experience in the EU has placed him on the pro-Brexit side of the argument.

And he admitted that he has been shocked by the EU’s intransigence.

He said: “I have been disappointed by the lack of flexibility over the last 12 months.

“Even when we took the extension of the grace period last year [for food and other essential supplies] they did not disagree with the principle of what we were doing, they only complained that we had not done it by agreement.

“To do something by agreement, the other party has to finally agree and stop talking.

“Particularly when you’re talking about chilled meats where, if you don’t take action, you end up with empty shelves, which is where we were last year.”

He also accused the EU of not following the Protocol agreement itself and of having a very one-sided view of it.

Lewis noted that the deal was meant to respect the daily lives of communities, all aspects of the Good Friday Agreement, the UK’s internal market and state functions, and the EU’s single market.

“The only thing out of the five things that the document says that would be respected and for which it works is the EU Single Market,” he said.

“We have to make sure the other four match that.”