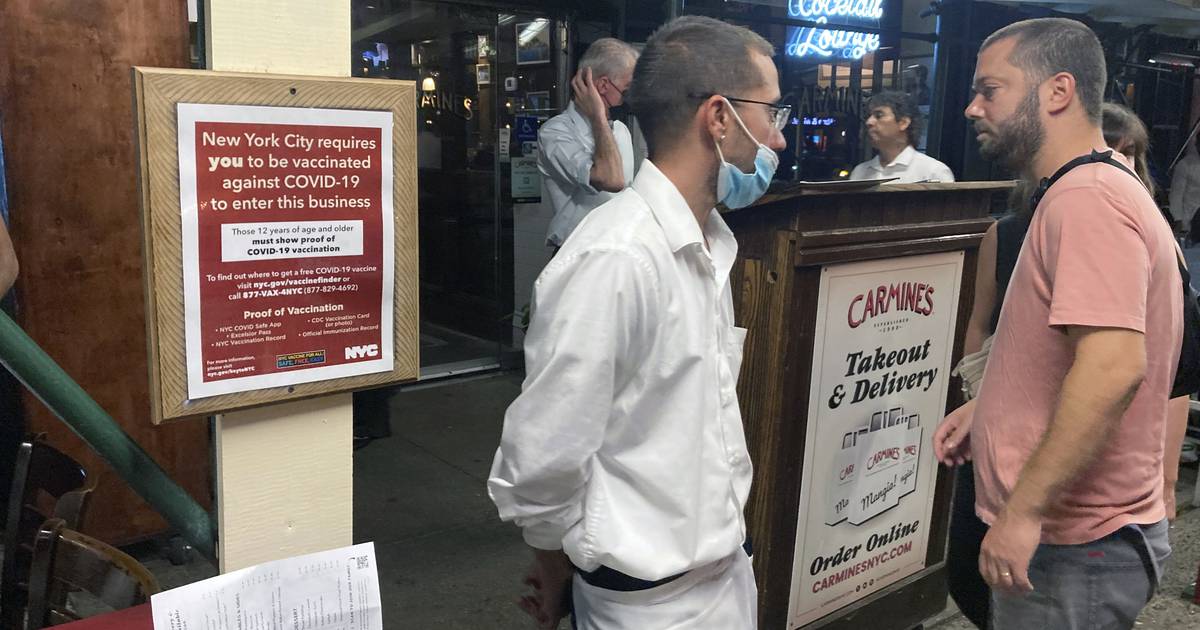 I have been working as a hostess in a popular restaurant for almost eight months. During a particularly busy lunch last week, a guest with a reservation came in looking for his table. When making a reservation, customers are sent multiple reminders about our company’s strict mask and vaccination requirements. Despite knowing it, the boss, who was a foot taller than me, looked at me after I asked for his documents: “You’re pathetic. Look at me when I tell you that.

I am no stranger to irritation and irritability. I can sympathize with guests when they get upset about long wait times or unhappy with seating arrangements. Shortly after I was hired, I got used to old clients looking at me with bewilderment and asking to speak to my male manager. But never have I experienced frustration like I’ve seen in reaction to the fact that we continue to enforce a vaccine mandate even as the citywide indoor vaccination requirement has disappeared.

As the country slowly recovers from COVID-19, vaccination restrictions on restaurants and other indoor activities are being lifted across the country. As of March 7, Key to NYC has been discontinued, which means by law, residents and tourists no longer have to provide proof of vaccination and identification to enjoy their favorite restaurants again.

However, companies can still continue to verify vaccines at their own discretion. This is not easy for staff like me.

Before the mandate, it was not uncommon for irate customers to verbally criticize seating arrangements or long wait times. On my first night on duty, a man called me a “jerk” because his reservation was running five minutes late. Two months later, I was called a liar followed by a list of expletives in front of a group of hungry diners, earning sympathetic looks and a sense of pity. I cried on my way home that night.

When the vaccine mandate began last August, customers began greeting me with an overwhelming amount of gratitude. It was a sweet change from the usual demands to sit down. I was thanked for keeping New York safe, and on occasion people slipped me cash for “doing the right thing.” It seemed that patrons were finally feeling safe eating inside, and I was the person they were crediting for this.

This all changed in March, when Mayor Adams lifted the citywide rule, but we kept our control of vaccinations.

Catch up on the top five stories of the day every weekday afternoon.

Whispers of the lifting of the mandate spread through the restaurant, but management made sure that vaccinations and identification continued to be required to dine inside. I was given a script on how to answer questions about our ongoing verification: “Although the state has lifted the mandate, per New York City guidelines, our company still has the right to request proof of vaccination.”

My presence became a constant reminder that the pandemic was still happening. I was met with a flurry of questions and demands: “Why the hell do you still need that?” “Don’t you think this is discriminatory?” “Tell your CEO you need to read the news.” All feelings of gratitude expressed by customers disappeared and the long nights at the host’s booth became almost unbearable. The altercations reached new heights, with people sometimes turning violent.

At 5-foot-4, not only am I physically belittled, but my ethnicity also came into play on occasion. My simple request for proof of vaccination and a matching ID turned into a bigoted mutter that always seemed to start with “you” when addressing me or my predominantly Asian and Latino co-workers.

She was no longer the person who kept the diners safe, but the one who prevented them from enjoying life. After months of building trust in the booth, learning the names of regular customers, and complying with state mandates, my credibility took a hit at the request to see a small CDC card or electronic vaccine passport.

I understand that these changing rules can be confusing and frustrating for diners. Trust me, my job would be a lot easier if I didn’t have to look at your ID or touch your tattered shot card. That doesn’t change the fact that I have to follow my company’s guidelines to get paid and pay my rent. Calling me obscenities will not change our policy. In fact, approaching employees with anger instead of mutual compassion and respect could get you fired.

So the next time you find yourself flushing red with frustration while reaching for your shot record, know that the host in front of you isn’t trying to be difficult; he or she is probably just trying to survive.

Ruiz is a hostess at a restaurant in Midtown.