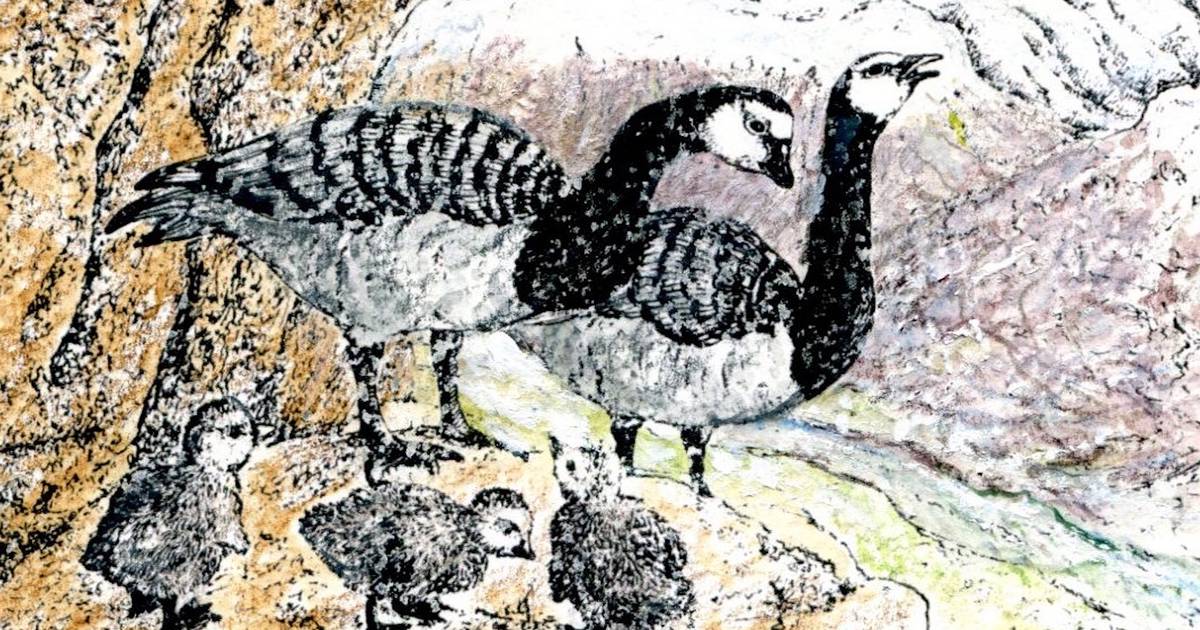 The great melting of the Arctic, at a rate three times faster than anywhere else on the planet, has turned its natural world upside down. Among wild birds and shorebirds that have “always” migrated between breeding in an arctic summer and wintering in Ireland, the black-and-white barnacle goose has had a dramatic change in behavior.

It has been more than 30 years since I joined an expedition, led by ornithologist David Cabot, to visit breeding geese in the High Arctic wilderness of northeast Greenland. Flocks of barnacles wintering on the windswept Inishkea Islands in northern Mayo have been Dr. Cabot’s lifelong study, and he hoped to find a few he had banded among those arriving in a still-frozen fjord at the end of May.

There they embarked on the strategy that has long made these geese remarkable: choosing to nest on narrow ledges atop steep cliffs.

This kept the adults safe from predatory arctic foxes while the eggs were laid and hatched. But the chicks finally had to feed. This required them to jump and fall, fluttering, to the bottom of the valley.

They often bounced down the road, sometimes fatally, and the foxes were waiting to catch them. (Cabot filmed this for RTÉ). Only half survived to follow their parents to the safety of a nearby lake.

There had to be a better way, it seems, and climate change may have forced them to find it. The geese have long interrupted their spring journey north with a feeding period in Iceland. Why not stay there and save yourself the annual effort of flying 3,000km to Greenland and back?

This is happening now, in increasing numbers. The birds began nesting on Skumey, a glacial lake island, in 2014. Now, farmers along the mudflats in southeastern Iceland are complaining that summer geese have reduced their hay harvest by 24 percent. .

By spring 2019, Skumey nests had increased to 1,330. Hundreds more outside the lake brought the breeding total to 2,051, with another 4,900 non-breeding adults. All this justified study, most recently done by Dr. Cabot, with Susan Doyle, Paddy Manley, and Courtney Redmond.

In Iceland last month, the team was impressed by the number of predators bothering ground-nesting geese. Repeated visits to their colonies saw only a few isolated attacks by arctic skuas and great black-backed gulls. And while Iceland has some 8,000 arctic foxes, many in a large nature reserve, none showed up during long guards.

In fact, while some barnacles continue to nest in northeastern Greenland, those in Iceland show much greater reproductive success. Nesters from the High Arctic arrive to find that climate change has brought forward the spring thaw and the short growing season for plants by several weeks. By July, the nestlings may find that the protein in their forage grasses is declining.

This mismatch, now eerily familiar in the progress of climate change, also plays out in the breeding of migratory shorebirds.

A report by Cabot’s team cites seven years of American research in Alaska to study the impact of earlier melting on the nutrition of wading birds such as sandpiper and sandpipers. He found that only about half of his chicks were getting enough insects. Unless the birds can time their nesting as Arctic warming progresses, their future populations could decline.

A warming world could, in fact, change entire migration strategies, as with barnacle geese. A NASA analysis of more than 200 studies, tracking more than 100 species since 1991, found that the movements of Arctic animals change in different ways, potentially altering entire ecosystems.

The number of migratory caribou is already in decline, as their calving, due to the length of the day, does not coincide with the new plant season, leaving their young without nutrients in their summer food.

Cabot’s team will repeat their Iceland study next June. Meanwhile, many of last winter’s barnacle geese off the coast of Sligo were early and fatal victims of the avian flu that is now sweeping through colonies of nesting seabirds, especially in Scotland. They include the birds of Bass Rock, the world’s largest gannetry.

This avian influenza plague has spread to wild birds from China’s intensive poultry industry, and thrives among seabirds lined up wing-to-wing on cliff ledges and islands. Since the species will certainly survive and recover, the flu could be seen as a natural check on bird populations. How long before Covid-19 and its successors get a similar deal on the natural regulation of Homo sapiens?