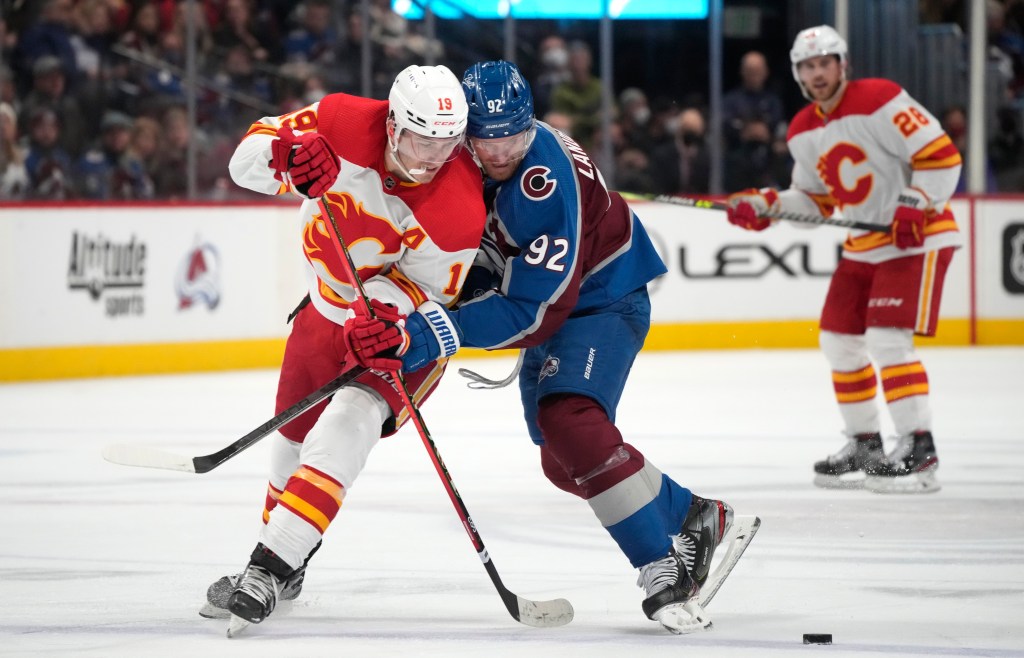 Two unfamiliar words for the Avalanche this season: Losing streak.

Colorado has dropped consecutive games for the first time since early November with a 4-3 overtime defeat against the Flames on Saturday night at Ball Arena. Avs netminder Darcy Kuemper allowed three goals before getting pulled early in the second period. Colorado later tied it but reserve goalie Pavel Francouz was unable to preserve the win.

The Avalanche (40-11-5) now embark on a three-game road trip starting Monday at the New York Islanders.

On Saturday night, Colorado and Calgary exchanged goals within the opening three minutes of the first period. Landeskog snuck a rebound past Flames goalie Dan Vladar just 42 seconds into the game. But a delay of game penalty on Kuemper (shooting the puck over the glass) opened up Calgary power-play chance. Forward Elias Lindholm cashed in at 2:29 from a face-off win.

The goals kept on coming.

Burakovsky converted on the Colorado’s second power-play opportunity to regain the lead. However, once again, it was squandered moments later with another Lindholm goal. A 2-2 stalemate that extended into the second period wouldn’t last.

The Flames established their first lead of the night when forward Erik Gudbranson beat Kuemper with a slapper from the point. It prompted Avs coach Jared Bednar to pull Kuemper from the game making saves on just 12 of 15 shots on goal.

“I didn’t feel like Darcy was real sharp, so at that point, we needed a little bit of something,” Bednar said. “I thought maybe to go with Frankie. He was really good coming in, too. A tough call to make. Darcy is starting and those (goals) certainly weren’t on him. … But this is a big game against a real good team that we’re playing. We needed everyone to be at their best tonight. So I made the decision.”

The Avs regained momentum with Francouz in net after Makar made a diving stop that provided a breakaway opportunity. MacKinnon finished it with a game-tying goal, 3-3, and emphatic fist pump to match. Neither team scored in the third period.

Welcome back, Big Z. Flames defenseman Nikita Zadorov spent five seasons with the Avalanche (2015-20) before getting traded to Chicago and Calgary. Zadorov returned to Colorado on Saturday night as a visitor inside Ball Arena.

The video board paid tribute to Zadorov early in the game with his Avs game highlight tape of biggest hits. Zadorov was later penalized in the first period for slashing. It led to the Burakovsky goal.

Zadorov finished the night with one assist. He has 15 points (three goals) this season for Calgary.

“We all loved that guy,” Landeskog said. “He was awesome and a big part of this locker room. You miss him but he’s playing well in Calgary and he has done well for himself. When you’re out on the ice, there are no friends, but I’m sure we’ll see him down the road and catch up with him again.”

Pride night. The Avalanche celebrated NHL inclusivity on Saturday with Pride Night at Ball Arena. Colorado players wore small patches on the lower portion of their jerseys — a rainbow circle with the text: LOVE ALWAYS WINS.

The Avs partnered with the organization “You Can Play” which has served the LGBTQ community for the past 10 years. You Can Play seeks to “challenge the culture of locker rooms and spectator areas by developing a culture of respect, in every player, coach and fan,” according to its website.

“Hockey should be inclusive for everybody and it is important to do things like this,” Makar said.

This story will be updated.