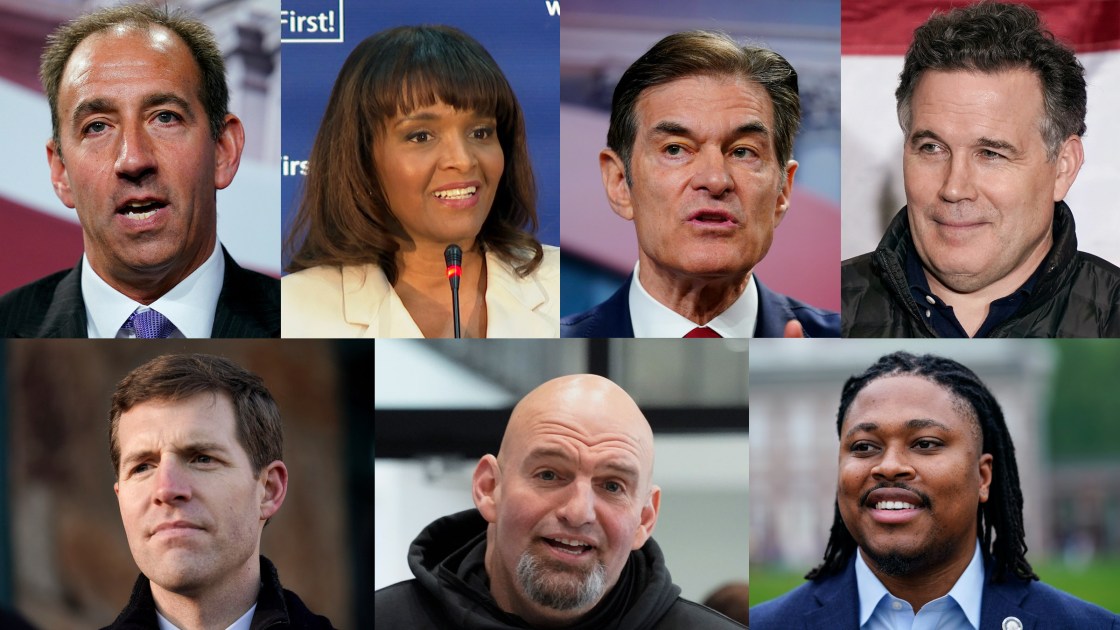 As the midterm elections approach, the national spotlight is once again on Pennsylvania.

The US Senate is currently split down the middle with 50 Republicans and 50 Democrats, and several races across the country are close enough for one of the major parties to win a seat or two, giving them the most.

Political observers agree that Pennsylvania so far is the most interesting Senate race to watch.

It’s a vacant seat, because incumbent Republican Senator Pat Toomey decided not to run for re-election. Four Democrats and six Republicans are running in the primaries. Many have non-traditional political résumés for a US senator, or little or no experience running a state campaign, or both. (See more about the candidates here).

While Pennsylvania is closely watched by political scientists, Pennsylvanians on average are far less connected and less likely to vote. Turnout in midterm elections consistently lags behind presidential elections across the US.

“For the average voter … who votes in the presidential election and doesn’t vote every six months, there is no clear understanding of the importance of this election,” said Abu Edwards, political consultant and political action chair of the Philadelphia chapter of the NAACP. .

There are seven open Senate seats in the 2022 midterm elections, with no incumbent running. Of those, three are in swing states where a Republican senator is retiring: Pennsylvania, North Carolina and Ohio.

Of those three, Pennsylvania is the most likely to elect a Democrat, known as a flip. North Carolina and Ohio both opted for Trump in 2020, but Biden won Pennsylvania. Historically, the president’s party tends to be at a disadvantage in midterm elections, so it won’t be easy for Democrats, but Pennsylvania is their best bet.

In addition to open races, there are several states where incumbents face the challenge of keeping their Senate seats. Predicting each party’s odds in the general election is difficult until each state holds its primary elections, some of which aren’t until August. Still, Pennsylvania is seen as a key battleground.

“The November race, for people outside of Pennsylvania, will be seen as one of a series of races that Democrats must win,” said Sarah Binder, a political science professor at George Washington University and a fellow at The Brookings Institution.

“It’s a pivotal race for control of the Senate,” Binder said. And the results will also signal the presidential race in 2024, given Pennsylvania’s recent history as a “purple” state.

The United States is in the midst of a decades-long streak in which no party has 60 or more seats in the Senate, said Stephen Medvic, a professor of government at Franklin & Marshall College in Lancaster. In this political climate, all races matter, he said.

“It is part of what is fueling the intense polarization. Every move that is made is believed to determine who is going to control national politics,” Medvic said.

Pennsylvania’s political landscape has the same divided dynamic. That’s why the primaries also matter a lot.

The Republican primaries are particularly interesting to election watchers because they serve as “a microcosm of the differences in the Republican party” in the US, Binder said. Potential Republican candidates have not been “vetted” in previous races, so “there are more likely to be surprises along the way,” she added.

Politicians will also be watching the Republican ticket as an indicator of how strongly Donald Trump’s endorsement aligns with victory in the GOP.

“This is one of the races where former President Trump is trying to flex his muscle and be the kingmaker of the country,” said Peter Montgomery, a member of the People for the American Way think tank, which studies the religious right.

Trump has endorsed famed physician Mehmet Oz to be the next senator from Pennsylvania.

The abortion debate is likely to be one of the biggest motivators for voters this year, experts agreed, but less so in the primaries. Still, they expect the issue to continue to capture voter gains through November.

“A lot of people who weren’t closely following the policy didn’t think the court would just take away a right that’s been around for 50 years,” Montgomery said. “It’s going to be a real wake-up call for a lot of people.”

Democrats will seek to keep it a priority. Senators voted May 11 to move forward with a federal law that would preserve abortion rights even if the Supreme Court strikes down Roe. It was not expected to pass, with one Democrat and all Republicans voting against it, just like the last time senators voted in February. “I think it’s really important to have this vote to show where everybody stands,” Democratic Sen. Amy Klobuchar of Minnesota told NPR.

Lesson in Georgia: The Power of Voter Turnout

The last time Americans focused on a state’s US Senate race was last year in Georgia.

It was a highly unusual election in that it took place in January 2021 as a runoff for both seats in the state. Democrats Jon Ossoff and Raphael Warnock came out winners by defeating two Republican incumbents.

“A lot of people didn’t expect Senator Warnock and Senator Osoff to win those races,” said Montgomery of People for the American Way. It happened, he said, because “organizers on the ground stayed focused on convincing people that getting out to vote is important.”

Both senators in that race raised more money than any other congressional candidate in history.

Like Georgia electing two Democrats in 2021, Pennsylvania would be breaking the norm by electing a second Democrat to the Senate this fall.

Pennsylvania had two Democrats in the Senate for a brief period at the start of Barack Obama’s presidency, Bob Casey and Arlen Specter, but not because voters chose two Democrats. Specter was a Republican for most of his decades-long political career. In 2009, at Obama’s urging, he switched parties. He then lost in subsequent primaries in 2010. Before that, you have to go back to 1945 to find a time when Pennsylvania had two Democratic senators, Joseph Guffey and Francis Myers, and lasted only two years.

Republicans, on the other hand, have held both Pennsylvania Senate seats many times; both seats were red for more than 90 of the last 120 years. But the most recent stretch was 15 years ago, when Rick Santorum was in charge from 1995 to 2007, along with Specter.

Roughly 80% of Democrats and Republicans will always vote for their party’s candidate, according to Medvic, the Franklin & Marshall professor, and even independents tend to have a preferred party that they tend to stick with. “The other thing is participation,” he added.

Edwards, of the NAACP Philadelphia, said his organization’s focus is to help the average voter, who only votes every four years, understand the importance of the midterms and get out and vote more often.

Turnout may be low in this week’s primary, he said. However, he hopes to use that information to shape voter mobilization strategies with other organizations before the general election.

“Voting is not like a driver’s license, it’s a privilege,” Edwards said. “It’s something that makes us part of society and they shouldn’t take it away from us.”